Four years of economic liberalization revives exports to record levels –with three quarters of shipments destined for China. Now Covid-19, and a new, ham fisted government threaten to send the industry back into its multi-decade slump. 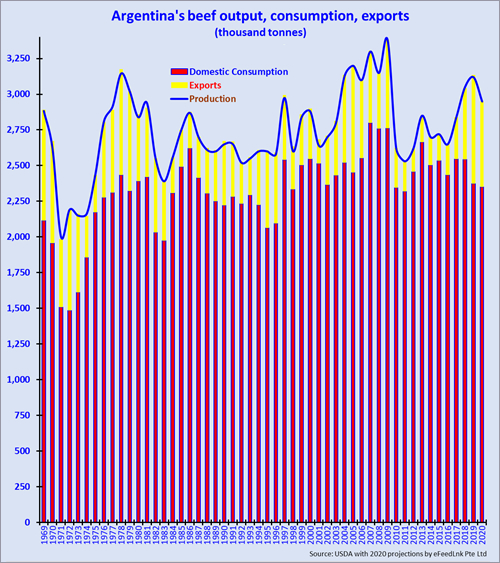 After four nearly perfect years, has the China-driven rebirth of Argentina's once famous beef cattle sector come undone? The late 2015 election of pro-free market prime minister Maurice Macri was immediately followed by the abolishment of beef export quotas and removal of a burdensom 15% export tax.

On the other hand, Argentina's late 2015 liberalization of beef cattle farming coincided with rapidly expanding Chinese beef consumption.  Soon thereafter, the Argentine peso fell by over 70% in three years. That boosted returns on exported beef relative to locally sold cuts, while making Argentine beef less expensive than its Australian and US competition.

America's trade war with China further boosted the latter's desire for a low-cost alternative to US beef. Moreover, the peso's post-2015 devaluation gave Argentine beef a huge cost advantage over that of Australia, who used to supply a majority of Chinese beef imports. In 2016 and 2017, China was happy to substitute imports of Argentine beef in place of equivalent but more expensive Australian cuts.

After mid-2018, African Swine Fever (ASF) further accelerated China's booming imports of red meat. Carried along by strong Chinese demand, after fifteen years of flat output going into 2015, production expanded 2.5% annually over the next four years –with exports expanding 42.3% annually over this time.

Thanks to the coincidence of ASF and China's trade war with America, Argentine beef exports wildly exceeded all forecasted estimates. Instead of increasing a USDA projected 16% from 500,000 to 580,000 tonnes, 2019 exports increased 52% in one year, to a whopping 760,000 tonnes –an export volume that was taken for granted in the early 1970s but had last been achieved in 2005.

Over the short-term, this China-driven export tsunami was a financial windfall –but came at the price of future output: After 7.3% annual beef production growth in 2017 and 2018, China's ASF-driven beef price inflation made short-term returns too high to ignore.

To take advantage of such exceptionally high returns, Argentine farmers boosted slaughter levels high enough to cause a contraction in the national cattle herd. Cattle slaughter rose from 11.6 million head in 2016 to 13.9 million last year.  While the slaughter of mature cattle rose from 5.4 to 6.4 million or 18.5%, cow slaughter jumped a far steeper 45.2%, from 3.1 million in 2016 to 4.5 million head last year.

Total cattle rose from 52.5 million head at the beginning of 2016 to 53.81 million in 2019 but will fall back to 53.69 million by the end of this year. This is forcing 2020's slaughter to fall back 2.2% from last year's 13.9 million to a USDA estimated 13.6 million. Moreover, last year's culling of so many fertile cows means that even under normal economic conditions, it will take longer than expected for inventories to exceed their 2019 peak.

Hence, after rising 3.3% from 3.05 million tonnes in 2018 to 3.15 million tonnes last year, the USDA expects output is falling back to the 3.05 million level in 2020. Due to dire economic conditions and falling returns we will describe below, we believe a 2020 beef production level of just 3.0 million tonnes or lower may be more realistic. Consequently, due to such supply constraints, even without China's corona virus outbreak, the export driven trend was making a secular peak in 2019.

With 2020 output stuck at 3 million tonnes, the real question is given Covid-19's impact on the world economy, how much can be exported to China and can domestic consumption absorb any export drop off? 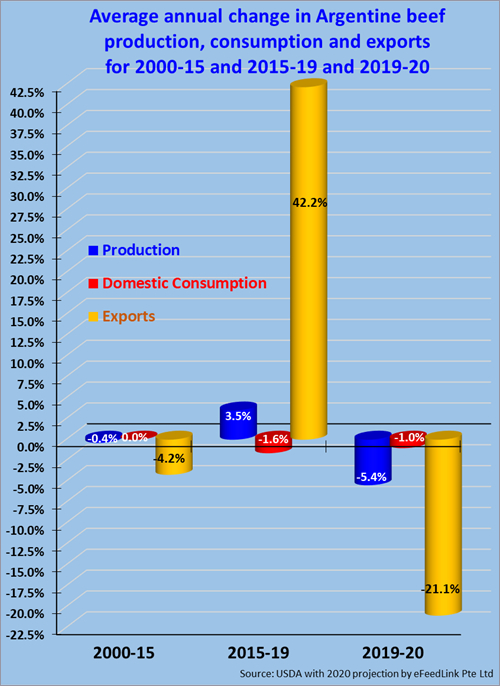 Moreover, while the trade picture looks less than promising, so does Argentina's political economy –and this threatens long-term profitability far more than lower Chinese import prices ever could.

With Covid-19 plunging the economy amid fears of domestic food shortages, Argentina's populist, newly elected government did the one thing which (for historical reasons) many beef importers find unforgivable: In late March, fearing high prices, food shortages and striking port workers, the government banned beef exports for two weeks, in order to keep domestic supplies abundant and prices low. Before the temporary ban was introduced, port workers refused to load feed grains or beef for export to China.

This new temporary ban comes several months after the pro-economic liberalization prime minister Maurizio Macri last power. Domestic politics may not disrupt Argentina's special trade relationship with China --but it can constrain the supply of exportable meat, halt all investment in beef cattle farming and make importers other nations wary.

Since the 1970s, Argentina has repeatedly bowed to ban, restrict or tax beef exports. This caused its once world leading beef cattle sector to go decades without any new investment or production increases.

The four previous years under Macri attracted the strongest investment in Argentine cattle farming and beef processing seen in decades. Now, economic populism is once again threatening to destroy beef farming returns and Argentina's capacity to export beef to the world.

--Moreover, while Argentina just made it harder for importers to buy its beef, Australia's government has started underwriting airfreight export shipments to markets like China. Australia is also providing support to ensure that Australia's port and shiploading infrastructure can keep exporting beef to China throughout the entire Covid-19 crisis –just as Argentine ports fall victim to Covid-19 induced wildcat labor stoppages and beef export bans.

Furthermore, in order to meet its Phase 1 trade deal export commitments to the United States, China could use Argentina's supply disruption to substitute the importing of more US beef in place of Argentine supplies.

Prior to writing this article, we were conservatively optimistic: We assumed that despite falling exports and annualized -10% to -15% growth in Q1, China's economy would recover faster than most observers expect. The USDA assumed Argentina's exports would fall from last year's 760,000 tonnes to 640,000 tonnes.

By comparison, we initially assumed that China's economic recovery would keep Argentine beef exports stable near 750,000 tonnes. Instead, these new developments imply that Argentina would be lucky to export 600,000 tonnes of beef, depending on how its exporting capacity recovers after the early Q2 export ban.

Three years ago, Argentina was the world beef trade's most promising dark horse in. For the first time since the 1960s, a new, economically sane Argentine government was leveraging its natural competitive advantages in beef. At the time, we gave opined that Argentina could return to the days of exporting 750,000 tonnes of beef faster than anyone expected –and Argentina did exactly that, breaking the 750,000 tonne beef export barrier in 2019– one year earlier than even we predicted.

But no sooner did Argentina achieve an export volume it first touched in the late 1960s, that it once more voted in yet another anti-business government, all over again.

In the 1970s, high oil prices and consumer price inflation was the Argentine policymakers' excuse for taxing and restricting beef exports. After flirting with a free market economy in the 1990s, another left wing government responded to a new debt crisis by once again restricting and taxing beef exports in 2005. The industry resumed the decrepit deterioration it suffered under similar policies in the 1980s and 1990s.

In the brief four years under Macri's economic liberalism, the industry bloomed back to life. On one hand, Covid-19 will briefly disrupt Argentine beef's rising world market status, perhaps for several years. On the other hand, the new Argentine government's anti-agribusiness, anti free trade policies threaten to send this former beef exporting superpower back into obscure irrelevancy.

All rights reserved. No part of the report may be reproduced without permission from eFeedLink.
Video >
Technical Paper >
Nutrigenomics in livestock - recent advances
The study of the effects of nutrients on genome functioning, in terms of gene transcription, protein levels, and epigenetic mechanisms, is referred to as nutrigenomics. Nutrigenomi ...
Stability, predictability and bioavailability of trace mineral source in the dairy cattle ration - Insights from animal nutrition research
Selko, the Feed Additives brand of Trouw Nutrition, is sharing research exploring the use of different trace mineral sources, mineral absorption and bioavailability when used in da ...
Nutrient utilization for sustainable beef production
In beef cattle production, requirement of feed to produce kg of beef is higher than other species, so considering more effective nutrient utilization is key for sustainability. Als ...