Spurred by the rapidly increasing meat and dairy consumption and several high-profile contamination incidents, feed and food safety protocols are gaining steam in China. Recently, Nuscience's Tianjin production location became the first premixture plant that produces exclusively for the local market in China to receive GMP+ Feed Safety Assurance (FSA) certification. With increased awareness among consumers, companies and the government, this can prove to be a watershed moment for feed safety in China.

With an annual feed production of well over 200 million tonnes, China has become the world's largest feed producer, having surpassed the United States. Chinese consumption of animal products such as meat and dairy, has risen exponentially since the early nineties. Meat consumption has tripled, with milk and dairy consumption having more than quadrupled over the same period. As the Chinese have become more acquainted with animal products, they are also becoming increasingly aware of possible hazards in the absence safety protocols.

A milk powder scandal in 2008 led to kidney damage - and even death - of infants. This was "the turning point" for food safety in China, says Wei Wang, GMP+ International's National Representative in China. The scandal led to the adoption of the 2009 Food Safety Law, which was renewed in 2015. The latest version of the law is regarded as one of the most stringent food safety law in the history of China. "Food and feed safety control has improved significantly since the implementation of the governmental regulations," Wang says.

It is against this backdrop that Nuscience Group, a company of Royal Agrifirm Group, with feed production locations in Tianjin and Suzhou, and a trading office in Shanghai, initiated the GMP+ FSA application process. In September 2018, the 10,000 tonne-per-month premixture and concentrates production facility in Tianjin became the first premixture plant in China to be awarded the certificate, which ensures the implementation of a proper feed safety management system. With almost 20,000 certified companies, GMP+ FSA is the world's largest feed safety assurance scheme. Other Chinese companies received certification earlier, but they operate in export. What makes the Tianjin case unique, is that it is the first GMP+ FSA certified company in China to produce exclusively for the local market.

"Food quality and safety is becoming more important in China", explains Mr. Gert-Jan Gerrits, technical director China at Nuscience. "If we can guarantee feed safety, we have done our part in keeping this portion of the chain safe."

"Nuscience has ensured a new level of feed safety", adds Mr. Johan den Hartog, Managing Director of GMP+ International, creator and owner of the GMP+ FSA scheme. "Not only will this strengthen the position of Nuscience in the market, the certificate will also increase awareness of feed safety amongst other fellow feed companies. Nuscience has definitely taken up a leading role on feed safety within the feed industry in China."

The adjudication of the GMP+ FSA certificate to Nuscience's Tianjin plant was marked by a visit of GMP+ International's Managing Director Mr. Johan den Hartog, Counsellor of the Embassy of the Kingdom of the Netherlands Mr. Wouter Verhey, and representatives of the feed industry associations of Tianjin and nearby Beijing. During this meeting, Mr. Jeroen Jeuken, Managing Director of Agrifirm Asia Pacific, said he wanted his company to "inspire other feed companies to follow our steps and elevate the safety benchmark in our industry".

For Nuscience, which operates under the name 'Lvsai' (meaning Green Feed) in China, GMP+ certification is way more than a marketing ploy. "The intrinsic motivation within our team to produce safe feed is extremely high," says Mr. Gerrits. "Feed safety is one of the main pillars in our organization. Before GMP+, we already were certified for ISO and FSSC, but we really wanted to take feed safety to the highest level possible. GMP+ FSA provides that opportunity. We are convinced that quality is the single most important thing that we as a company can provide to our customers. Surely, price and service are important as well, but without quality - consistent quality, that is - you will not be able to survive in the long run."

While the number of GMP+ FSA certified companies is relatively small, especially compared to the numbers in Western Europe, its brand recognition in the People's Republic is growing. Last September, during a seminar in Tianjin, the room was filled to capacity. Many from the feed industry were eager to learn more about GMP+ FSA. Mr. Gerrits says: "More and more, companies in China are beginning to realize that it is not just about price and service, but also about quality and safety. Of course they know about ISO, but GMP+ FSA's norms and standards are specific to the feed industry."

However, change in this vast country is a slow process. "The Chinese people value their traditions. If they have been working with certain raw materials and safety measures for decades, they are hesitant to give those up. At the same time, if you sit down with them and explain new systems and products, their effects and guarantees, they are very open to adopting them."

And of course, implementing GMP+ FSA is no cakewalk. It did take a lot of work and getting used to, Mr. Gerrits acknowledges. "We had to change a lot of internal procedures. Also, the chain approach (that, among other things, requires companies to trade exclusively with other GMP+ FSA certified companies) didn't make things easier for us." But that's where Nuscience's intrinsic motivation came into play. "Eventually, we made it all work. And now that the new protocols are implemented, and well known within our organization, our company is thriving. If our customers have questions or complaints, we can easily show the exact things we have done, thanks to track and trace. GMP+ FSA is very transparent. The Chinese people are surprised by this. It's something most of them are not used to."

Despite stricter safety laws in China, some still feel that feed is not yet getting the due attention of Chinese government. "People have to realize that food safety cannot be achieved without feed safety", says Mr. Den Hartog. Adds National Representative Wang: "We are actively cooperating with the Chinese government, industrial associations, NGOs, leading feed producers, and universities to further the case of feed safety."

"It is up to producers, supermarkets, fast food chains to take the lead", Mr. Gerrits concludes. "If we do our part, all the government has to do, is advise and facilitate." 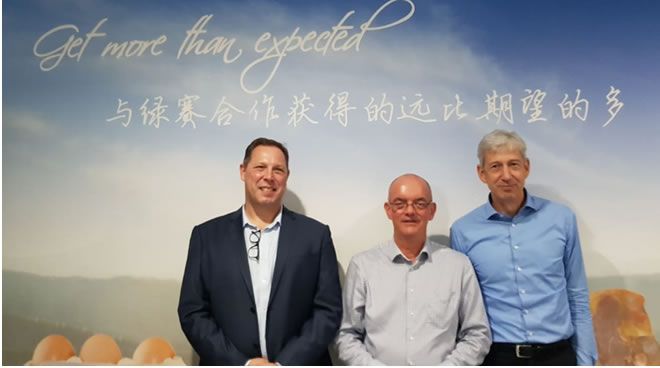 (From left) Mr. Gert-Jan Gerrits, technical director China at Nuscience; GMP+ International's Managing Director Mr. Johan den Hartog; Counsellor of the Embassy of the Kingdom of the Netherlands Mr. Wouter Verhey
Video >
Technical Paper >
Ingredients price volatility and minimising the impact on pork and chicken meat production: Feed mill perspectives
Multifold incidents such as supply chain interruption, climate changes, the Ukraine war, and fluctuating COVID outbreaks in different regions, are all contributed to the current vo ...
Influence of enzyme supplementation in the diets of broiler chickens formulated with different corn hybrids dried at various temperatures
The use of exogenous enzymes is a common nutrition strategy of the poultry industry. However, the influence of this additive on the microbiota and its efficiency when the diets are ...
Zearalenone - a known but underestimated risk in gilts
Feeding ZEN-contaminated feed to gilts can have huge negative implications on animal health and performance. Konstantinos Sarantis explores the literature to explain why ZEN is so ...