Association between heat stress and oxidative stress in poultry; mitochondrial dysfunction and dietary interventions with phytochemicals

Association between heat stress and oxidative stress in poultry; mitochondrial dysfunction and dietary interventions with phytochemicals

Heat as a stressor of poultry has been studied extensively for many decades; it affects poultry production on a worldwide basis and has significant impact on well-being and production. More recently, the involvement of heat stress in inducing oxidative stress has received much interest. Oxidative stress is defined as the presence of reactive species in excess of the available antioxidant capacity of animal cells. Reactive species can modify several biologically cellular macromolecules and can interfere with cell signaling pathways. Furthermore, during the last decade, there has been an ever-increasing interest in the use of a wide array of natural feed-delivered phytochemicals that have potential antioxidant properties for poultry. In light of this, the current review aims to (1) summarize the mechanisms through which heat stress triggers excessive superoxide radical production in the mitochondrion and progresses into oxidative stress, (2) illustrate that this pathophysiology is dependent on the intensity and duration of heat stress, (3) present different nutritional strategies for mitigation of mitochondrial dysfunction, with particular focus on antioxidant phytochemicals. 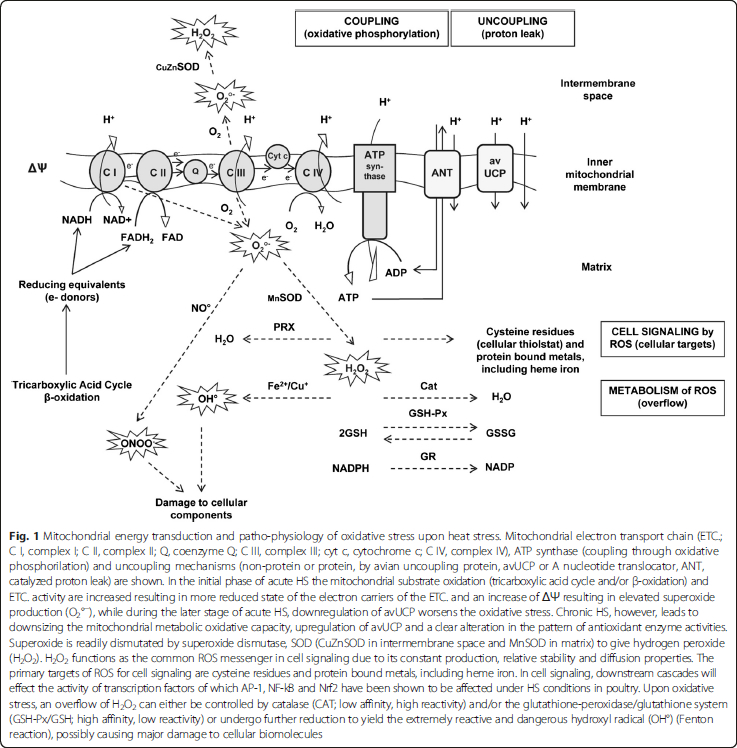 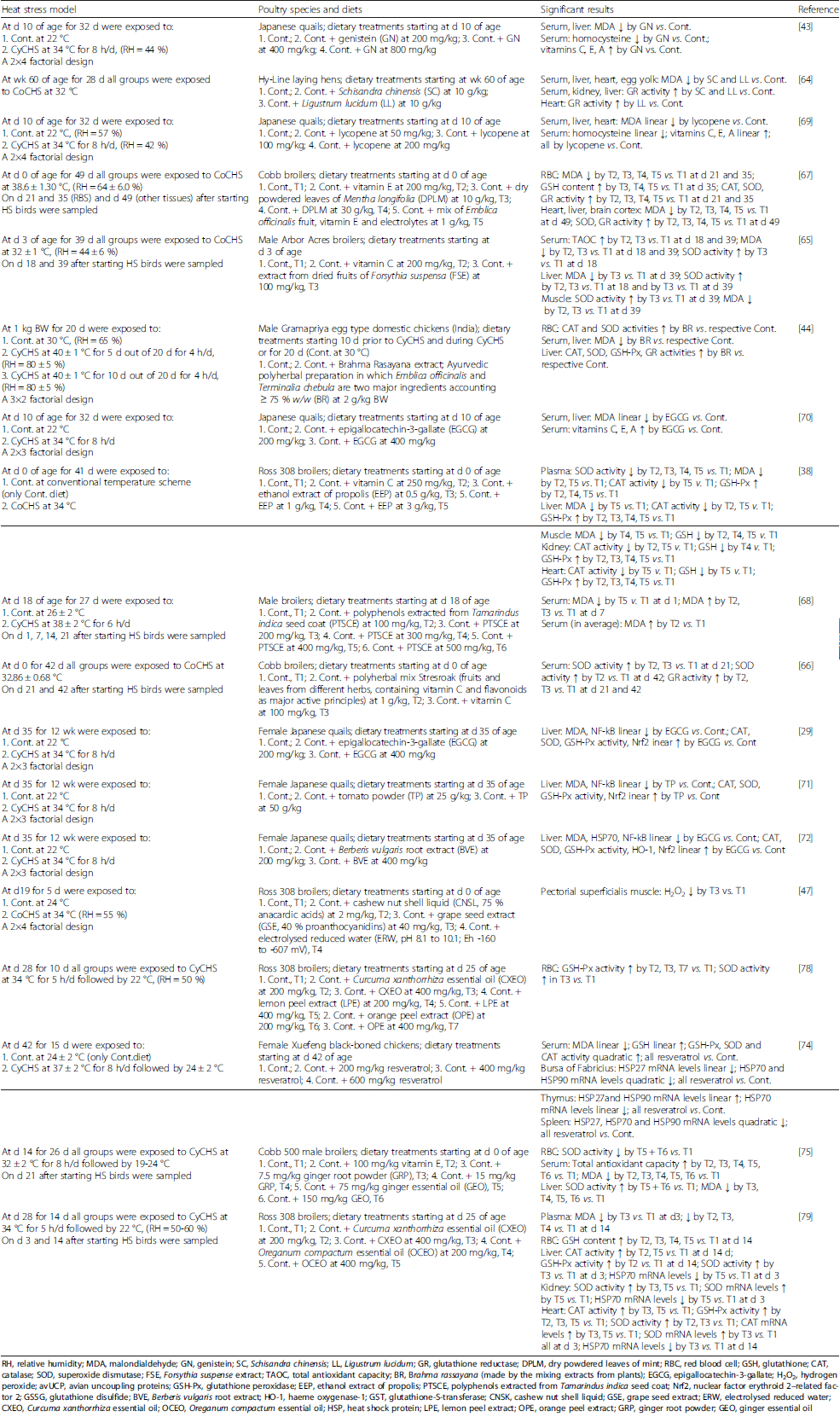 Table 1  Effects of supplementary phytochemicals on oxidative status of poultry under cyclic chronic heat stress (CyCHS), constant chronic heat stress (CoCHS), and acute heat stress (AHS) (the birds were sampled at the end of HS, unless otherwise stated). Signicant effects on parameters of oxidative status are given for dietary treatments under HS conditions as compared to a heat stressed control (i.e. Cont. or T1). In case, both a non heat stressed (non supplemented) and heat stressed (non supplemented) control are included, data are used to confirm the presence of heat stress
Conclusions
Current evidence strongly suggests that HS induces oxidative stress in poultry. The current review focused on mitochondrial dysfunction upon heat stress. It is suggested that mitigation of mitochondrial dysfunction can be approached though various nutritional strategies: 1) reduction of the membrane potential (e.g. mild uncoupling), 2) improvement of ETC. efficiency, or 3) enforcement of the host's capacity to detoxify ROS. Currently, only evidence with regard to the latter strategy is available. Several studies found positive results with terpenes/terpenoids, and in particular with sesquiterpenes/sesquiterpenoids (ethanol extract of propolis, Curcuma xanthorrhiza essential oil, and ginger root oil). Lignans in traditional Chinese medicinal herbs and lycopene showed positive results. Nonetheless, in the majority of studies, the beneficial principles were various types of flavonoids and related compounds (proanthocyanidins and resveratrol), either in, or not in combination with vitamin C or E. Epigallocatechin-3-gallate and lycopene were found to interact with cell signaling pathways. It was repeatedly reported that these phytochemicals were beneficial to heat stressed poultry but were less or not effective in non-heat-stressed control birds. This supports the contention that antioxidant phytochemicals might have potential in challenging conditions.

Article made possible through the contribution of J. Michiels et al.
Video >
Technical Paper >
Effective moisture management for profitable feed milling
Producing high-quality feed while striving for highest profitability is no new strategy to feed millers. It is, however, easier said than done considering many factors affecting fe ...
Modelling the feed intake response of growing pigs to diets contaminated with mycotoxins
Quantifying robustness of farm animals is essential before it can be implemented in breeding and management strategies. A generic modelling and data analysis procedure was develope ...
The role of non-animal origin feed ingredients in transmission of viral pathogens of swine: A review of scientific literature
The emergence of porcine epidemic diarrhea (PED) in commercial swine in North America and growing concerns about the potential for the introduction of African swine fever (ASF) fro ...