People eat salmon for its omega-3 EPA and DHA content. This is according to findings of a market research conducted by Dutch aquaculture firm Veramaris.

From 2016 to 2018, Veramaris polled more than 14,000 consumers in six countries and 50 retailers from five countries to understand consumer and retailer perspectives toward salmon in major global markets including the US, France, UK and Australia.

Consumer data showed that omega-3 fatty acids are very important to salmon consumers in all of the surveyed countries, with at least 55% of participants responding that omega-3 content of the final salmon product is extremely or very important.

Additionally, US consumers who eat salmon at least once per week are twice as likely to care more about the amount of EPA & DHA omega-3s in salmon than those who eat salmon every two or three months.

At this top trade event for seafood professionals, CEO Karim Kurmaly and the Veramaris team discussed how the Veramaris omega-3 EPA & DHA algal oil offers a standardised way to determine and regulate the amount of omega-3 EPA & DHA fatty acids in salmon so consumers are confident they are receiving the full health benefits of the "salmon brand" promise.

Veramaris is a joint venture of DSM and Evonik for the production of the omega-3 fatty acids EPA and DHA from natural marine algae. Producing an algal oil rich in the two essential omega-3 fatty acids EPA and DHA through large-scale fermentation at its facility in Blair, Nebraska, USA, Veramaris enables partners along the value chain to become independent from wild-caught fish and meet the growing demand for animal protein responsibly. 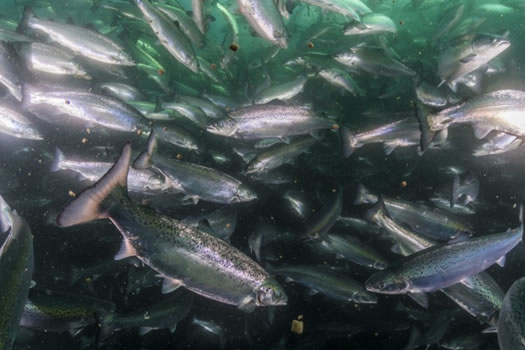 These Atlantic salmon (salmo salar) are raised in Norwegian aquaculture on the island Smøla close
to Kristiansund.  Image: Veramaris / Uli Kunz
Video >
Technical Paper >
Leading the fight against Avian Influenza
The need to combat Avian Influenza (AI) on poultry farms has arguably never been greater than it is today. As governments and health authorities fight to contain the devastating im ...
Expert views on effectiveness, feasibility, and implementation of biosecurity measures for mitigating Tier 1 disease risks in the US swine, beef cattle, and dairy industries
Understanding disease transmission routes and implications for biosecurity is critical to mitigating livestock disease outbreaks and maintaining efficient and profitable production ...
3 reasons to reduce surface tension in feed processing
Surface tension allows some spiders (and other insects) to walk on water and raindrops to coalesce into beautiful patterns on a surface. But when it comes to animal feed, surface t ...