Adiveter has extended the availability of Salmocid-F, a highly effective formaldehyde-based product for application in feed against major pathogens, to the Southeast Asian market. 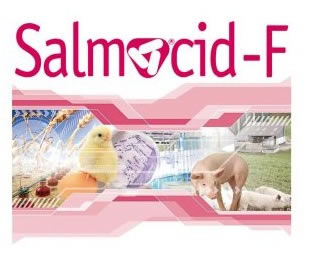 Salmocid-F is a blend of formaldehyde and organic acids for the control of the major pathogens in feed, and is available in liquid and powder format. It maintains Salmonella-negative status for up to 21 days. It is also highly effective against the most important microorganisms present in animal feedstuffs, including bacteria and viruses (such as ASFv and PEDv).

Feed is one of the main routes of transmission of microorganisms. Bacteria such as Salmonella, E. coli or Campylobacter, fungi or viruses can contaminate it and cause serious consequences in all productive phases, affecting animal health and performance and putting public health at risk. A good biosecurity plan in feed mills, including a good management and the inclusion of feed additives, is necessary to control pathogens while improving farm zootechnical parameters.

Salmocid-F is significantly more effective against the major pathogens than combinations of organic acids. At a dose of 0.5 kt/t it achieves the same sanitising effect as 3 and 6 kg/t of the main organic acids on the market. Studies presented to the European Food Safety Authority show that diets treated up to 4 kg/t Salmocid-F are perfectly tolerated by the animals. It was also observed that the use of Salmocid-F achieved an increase in overall farm productivity, with improvements of more than 4% in feed converstion in field trials. At a dose of 2kg/t, improvements in animal performance are shown. It is also shown to effectively inactivate ASFv: for a concentration of only 0.5 mg/ml of Salmocid-F, a reduction factor greater than four decimal logarithms is achieved after 24 hours.

Adiveter is a leader in feed safety, providing to the market adapted solutions based on innovative products, the latest technology on dosing equipments and analytical services.