Impact and management of heat stress in swine: an underestimated issue

Impact and management of heat stress in swine: an underestimated issue

Pigs are sensitive to heat. During the finishing period, their comfort temperature has been evaluated at 22°C. Above 25°C, they suffer from heat stress and their body and eating behavior adapt to evacuate the heat generated by metabolic processes in their hot environment (Renaudeau et al., 2011). It has been estimated that heat stress generates economic losses to the swine industry of $299 million per year in the U.S. alone (St-Pierre et al, 2003).

If the issues of heat stress and the mechanisms involved are well-known under tropical climates, it seems that the reality of the risk remains poorly estimated in other areas. An original field survey was conducted by Lallemand Animal Nutrition during the summers of 2016 and 2017 to evaluate the reality of heat stress on farms in Europe. Temperature and humidity were recorded every 30 minutes in the barn, at the level of the animals, thanks to electronic probes placed next to the trough (picture).
This survey gives a picture of the situation in farm conditions. Figure 1 summarizes the data gathered from 19 farms in Europe and Asia (South of China and Japan): the average amount of time spent daily above 25°C in the farrowing room is depicted. In addition, based on the literature (Quiniou et al. 2000), the associated reduction of sows' feed intake was calculated.
First, the results indicate that, even in countries considered as "temperate", heat stress is a reality: Netherlands and Austria for example, are also at risk. This shows that heat stress is not only due to the climate, but housing conditions and ventilation management of the barns play an important part as well. This survey also confirms the cost of heat stress in terms of energy loss: between 0.4 to 2.1 Kg per day of reduced feed intake in lactating sows have been calculated. 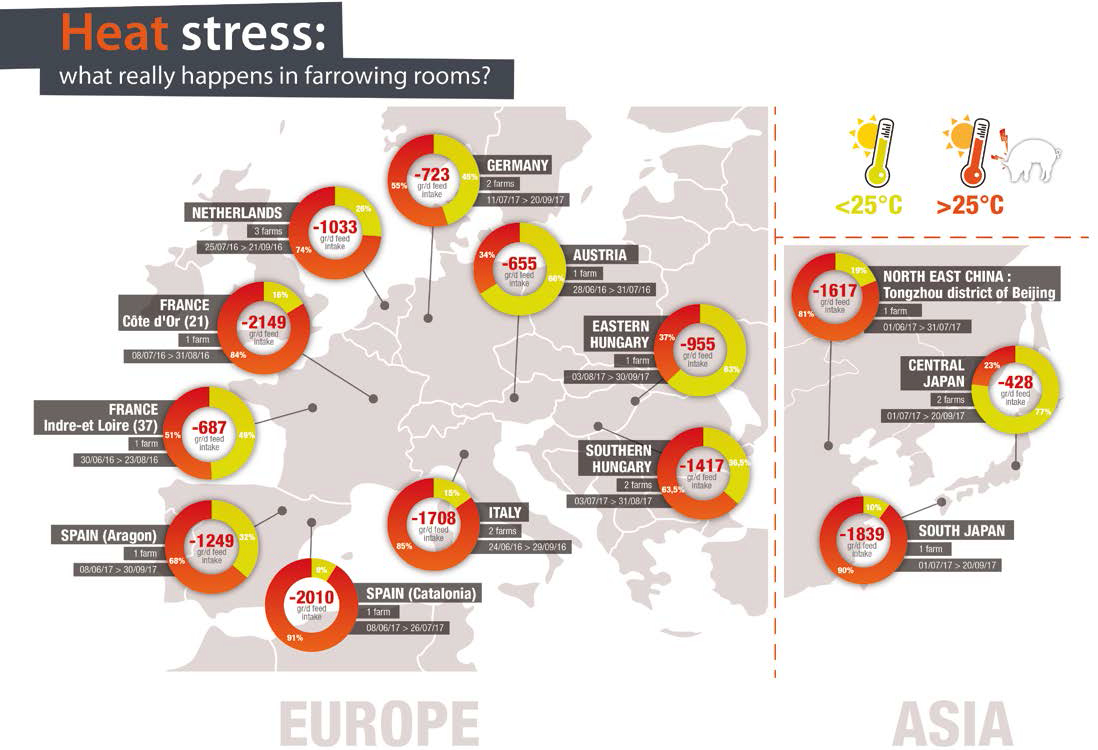 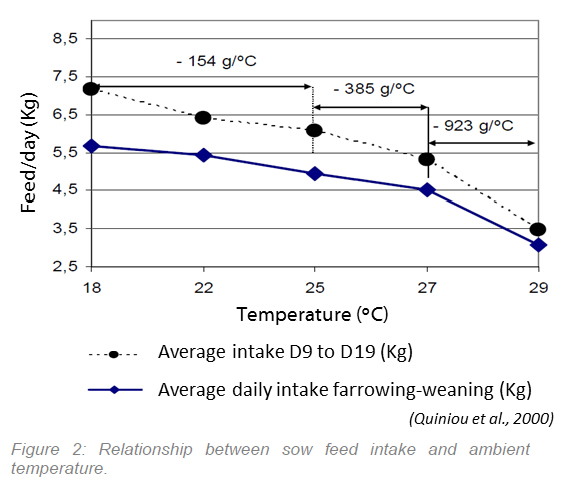 Above, 25ºC the pig must adapt to maintain its body temperature: mechanisms that dissipate heat are increased while heat production is reduced. Digestion and metabolic utilization of dietary nutrients is an important source of heat for the body: feed intake is strongly reduced during heat stress periods, with repercussions on growth or milk production in sows; The impact of feed intake is more important as the temperature rises (Figure 2).
Other physiological functions are also affected, such as immunity or reproduction while energy is diverted towards thermoregulation (Wegner et al., 2016).
Overall, heat stress is translated in terms of animal signs and performance losses:
•  Increased rectal temperature
•  Increased water consumption and urine quantity
•  Reduced feed intake
•  Inactivity
•  Convulsion
•  Reduced body weight/decreased growth
•  Paleness, dry skin
•  Tachypnea and bradycardia
•  Higher sensibility to disease
•  Reproduction issues (impact on fertility, farrowing rate, litter size…)
•  Mortality
For lactating sows, the combination of high ambient temperature and reduced feed intake has a huge impact on milk production. Black et al. (1993) estimated that the reduction in milk yield under heat stress may be greater than would be expected from an equivalent decline in food intake for sows housed under thermoneutral conditions. This may result from a redirection of blood flow to the skin and away from other tissues, including the mammary gland to contribute to heat dissipation. The researchers showed that when ambient temperature increased from 18 to 28°C, milk production decreased by 25%.
The effects of heat stress on health are not negligible. It has been shown that serum endotoxin level is increased under heat stress. This can be linked to reduced immunity but also a weakened gut barrier function, which can lead to pathogens translocation from the gut lumen into the blood flow. Ileum and colon integrity is compromised in pigs under heat stress, due to reorganization of the tight junction proteins (Pearce et al., 2013).
Potential of microflora management
The use of probiotic yeast S. cerevisiae boulardiiI-1079 (LEVUCELL®SB, Lallemand Animal Nutrition) to help control digestive process and performance, under challenging conditions, is extensively documented. Users feed-backs indicated that its benefits could help ensure sows' performance under heat stress situations, which is corroborated by field trials (see following chapter). The team of Etienne Labussière at INRA Pegase, in France, houses a state of the art experimental facility to study energy balance and metabolism in swine under controlled conditions (ambient temperatures…). These respiration chambers were used to conduct an in-depth study about the effects of the live yeast supplementation on thermal heat acclimatization and energy balance in swine. 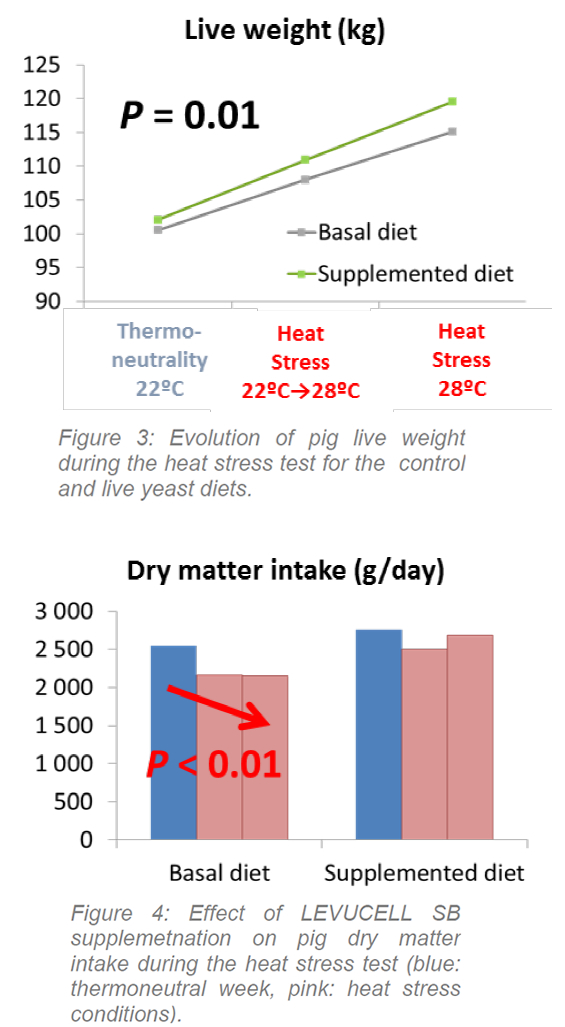 In this experiment, finishing pigs were used as a model for swine and sows, since, as Labussière presented it: "bigger the animal, the more sensitive to heat stress".
•  12 Pietrain × (Landrace × Large White) pigs received a cereal and soybean meal based diet supplemented or not with S. cerevisiae boulardiiI-1079, supplementation starting two weeks before the test.
•  For each diet, the pigs housed individually in the respiration chambers were subjected to one week at 22°C (thermo neutrality,) followed by 2 weeks at 28°C (heat stress) (temperature increased gradually over 2 days to allow for animals' adaptation).
•  Different parameters were monitored, including individual live weight, eating behavior, energy and nitrogen balances. Heat production was calculated through gas exchange measurements according to the principles of indirect calorimetry.
Results of this study indicate that the live yeast had a positive effect on growth performance under both thermo-neutral and heat stress ambient temperatures. However, the supplementation had a greater impact under heat stress as it was able to "compensate" for the negative impact of heat on pig growth (Figure 3).
This could be linked to two effects of the supplement:
1.  Improved feeding behavior: the number of meals per day was significantly improved during heat stress and the total daily feed intake was not affected by ambient temperature with the supplemented diet (Figure 4).
2.  Positive effect on energy metabolism: less energy is consumed for heat production, hence made available for pig growth (higher energy retention).
Live yeast benefits to lactating and gestating sows
Farm trials conducted with sows in maternity pen confirm similar benefits in sows in "real-life" conditions: under heat stress conditions, sows feed intake is improved, which translates into improved piglet performance in lactation and at weaning (Table 1).

The trial conducted in Ceara State in Brazil under the supervision of Bruno Silva, from the University Federal de Minas Gerais, shows the effects of the live yeast supplementation of high-prolific sows both during gestation and lactation. This trial involved 300 TOPIGS sows of mixed parity. The sows were supplemented from day 90 in gestation up to weaning (24 days).
•  During the last days of gestation, the supplementation leads to improved farrowing process (a benefit of S. cerevisiae boulardiiI-1079 extensively documented under normal conditions). The number of live-born piglets was increased (13.37 vs.13.87 piglets/sow), while the mortality rate at birth decreased (5% vs. 4%).
•  In lactation, sows feed intake was significantly higher under heat stress with the supplementation (Figure 5); leading to better preservation of the sow body reserves during this critical phase (Figure 6). Hence, the sows are better prepared for the next reproductive cycle.
•  Consequently, piglets show better growth performancein lactation. Average daily gain is significantly improved by +8.2% vs. Control (Figure 7). Consequently, at weaning, piglets are heavier (6.30 vs. 5.88 kg for control sows; P<0.01).P<0.01 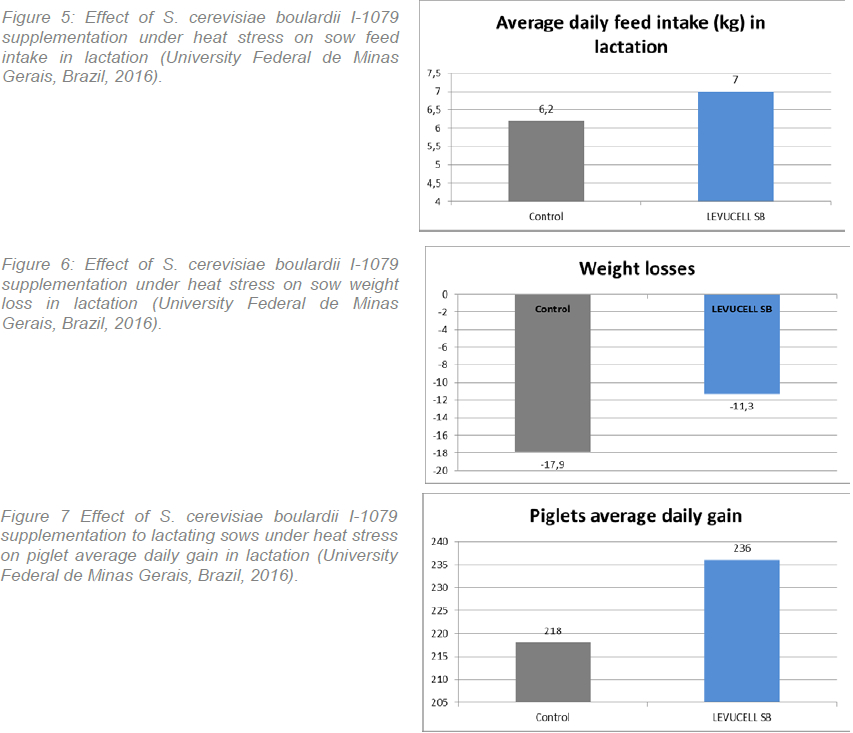 Conclusion
Heat stress in pig production is an important and underestimated issue.Its effects are detrimental to performance and welfare, particularly through a reduction of feed intake and redirection of the animal metabolism. Beyond performance, health and reproductive performances can be affected at longer term (loss of body reserves, risks due to increased intestinal permeability and lower immunity…).
It is crucial for producers to be aware of heat stress issues, and for example, the use of temperature/humidity sensors in the farrowing room can help alert on the risks. Innovative INRA study clearly demonstrate the benefits of managing the animal digestive microflora with specific live yeast under heat stress conditions, translating particularly to higher feed intake and improved feed efficiency, effects which have already been demonstrated in production situations in gestating and lactating sows. This supplement could represent a valuable tool to help alleviate the heavy toll of heat stress on pig production, in complement to relevant heat abatement strategies in the barn.
For more of the article, please click here.

Article made possible through the contribution of Lallemand

Video >
Technical Paper >
Influence of feed form and particle size on gizzard, intestinal morphology and intestinal microbiota composition of broiler chicken
Feed structure (particle size) and form (mash, pellets) play very important roles in ensuring the optimal utilization of nutrients by determining the level of feed intake. Modern m ...
Dietary fibre and intestinal health of monogastric animals
Animal performance, feed efficiency, and overall health are heavily dependent on gut health. Changes in animal production systems and feed regulations away from the use of antibiot ...
Driving enteric health through manipulation of intestinal microbial fermentation without supplementation of in-feed antimicrobial growth promoters
Consumer- and legislation-driven pressures to remove or reduce the use of antibiotics in monogastric animal production in Asia-pacific region has been increasing, and most of the c ...