Heat Stress and ROS:
Under heat-stress conditions (i.e. high temperature and humidity) and as the hen ages, oxidative stress increases due to the synthesis of reactive oxygen species (ROS).  When the hen is unable to neutralize the various ROS molecules that are generated, the hen's normal metabolism, physiology and production performance will be negatively affected (Fouad et al., 2016). 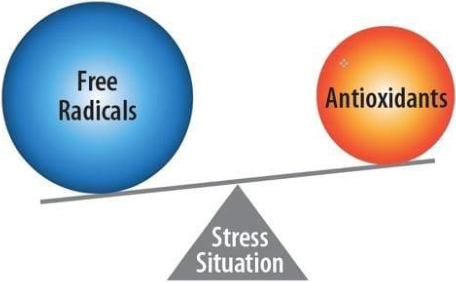 The length of laying hen cycles is something that geneticists and producers alike have been working to increase. In many countries it is becoming more common to keep layers to 80 weeks of age and beyond. The move to cage-free production complicated this aim somehow, as producers and packers are worried about problems occurring late in the cycle; affecting overall productivity. Demonstration flocks, however have been kept in production for over 90 weeks with good results – demonstrating that there is further scope for genetic improvement in laying persistency.

However, in order for this strategy to be commercially viable, persistency in lay needs to be maintained along with egg quality. Poor eggshell quality is a major cause of downgraded eggs (seconds), a function of reduced shell thickness and strength. If the number of cracks and breakages becomes too high then profits are severely affected. Supporting these aims is down to genetics, nutrition and management. Birds also need to remain healthy throughout lay from both a production and welfare point of view.

Oxidative stress increases as animals age, which in turn can decrease laying performance. Variability in shell quality increases as the flock ages. Therefore, the organs and tissues involved in egg production need nutritional support; in particular protection against oxidative stress. Hens also require more calcium as they get further into the laying cycle. If not provided by the diet then the bird will take more from bone stores, which can lead to osteoporosis – a significant welfare concern. Similarly, a hens' selenium body reserves need to be at an optimum level, in order to maintain the selenoproteins synthesis and antioxidant protection ensuring both egg production and quality. Albumen quality (Haugh units) decreases with age, again due to increased oxidative stress. This affects the cooking and eating quality of eggs as well as some of their functional properties, exploited in food production. 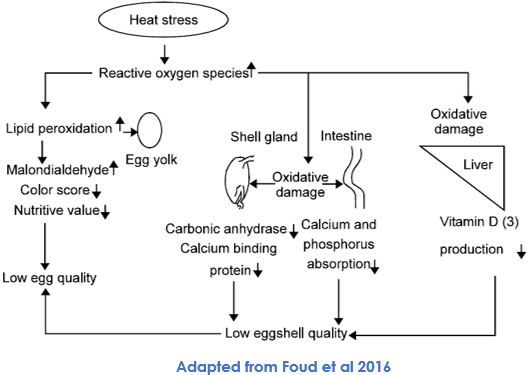 High production of reactive oxygen species induced by HS may suppress the absorption of calcium and phosphorus, affects vitamin D production and reduce the secretion of carbonic anhydrase and calcium-binding protein due to the induction of oxidative damage in the intestine, liver and shell gland. In addition, Heat stress may increase the malondialdehyde (MDA) level as well as reducing the yolk color score and egg nutritional value by enhancing yolk lipid peroxidation, thereby yielding low quality eggs.

To reduce oxidative stress, selenium (Se) is often supplemented into poultry diets because of its specific and integral role in the synthesis of selenoproteins. Selenoproteins are directly involved in thyroid hormone activation/metabolism and several antioxidant defenses, which include reducing ROS, reducing and reactivating oxidized amino acids, and modulating various immune responses (Surai, 2018).

Selenium is a unique essential trace element in biology as it is the core constituent of two amino acids, whereas other trace elements are added to proteins later as cofactors. These two amino acids are selenomethionine (SeMet) and selenocysteine (SeCys). SeMet is homologous to methionine with the only, but important, difference that Se replaces sulphur. SeMet is considered a safe storage form of Se and does not induce structural or functional modifications of proteins. Cells are not able to distinguish between methionine and SeMet during protein synthesis. SeCys is the true biologically active form of Se. This amino acid is incorporated, under gene control, into the so-called selenoproteins through specific and dedicated translation machinery. The particular biological functions of this amino acid and gene encoding incorporation validate its classification as an amino acid; it is considered the 21st.

The redox activity of those amino acids under physiological conditions allows a wide variety of post-translational protein modifications, metal free redox pathways, and unusual chalcogen redox states. For example, unlike any other amino acids, cysteine and SeCys can participate in several distinct redox pathways, including exchange and radical reactions, as well as atom-, electron-, and hydride-transfer reactions. Furthermore, in the periodic table, the position of Se falls between metals and non-metals, making selenoproteins effective catalysts for many biological redox transformations (Surai, 2006).

Selenium (Se), defined as the chief executive of the antioxidant system, is involved in several levels of antioxidant defence. Its biological functions are associated with selenoproteins, which contain Se in the form of the 21st amino acid, selenocysteine (SeCys). In avian species, 26 different selenoproteins have been identified. Most of them are directly or indirectly involved in antioxidant defences and redox status maintenance. Of these, glutathione peroxidases (GSHPx), thioredoxin reductases (TrxR) as well as selenoprotein P play an important role in poultry. In general, selenoproteins are involved in regulation of many different physiological and biochemical processes, including: l Glutathione-dependent hydroperoxide removal. l Reduction of thioredoxins. l Selenophosphate synthesis. l Activation and inactivation of thyroid hormones. l Repair of oxidised methionine residues. l Endoplasmic reticulum associated protein folding and degradation.

Regardless of the Se source, the maximum recommended amount of supplemental Se that can be added to animal diets is normally limited to 0.3 ppm however there is no upper limit defined in many Asian countries. The supplementation of Se typically is mediated via inorganic sources such as sodium selenite (SS). Contemporary research has demonstrated however, that supplementing with organic selenium sources, such as Se-Yeast (SY) or pure chemically synthetized Se forms, like hydroxy-selenomethionine (OH-SeMet – Selisseo®, Adisseo France SAS), enhances Se absorption, retention in body tissues and production under stressful conditions compared to SS. 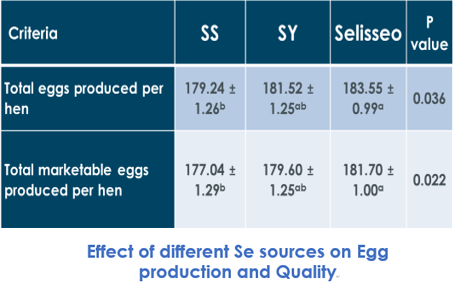 Recently an experimental trial was carried out to determine if the production of ageing layers under heat stress conditions would be impacted when fed different Se sources. In this trial, HyLine WD-36 laying hens were fed a corn-SBM-DDGS layer diet that was supplemented with 0.3 ppm Se from either SS (Sodium Selenite), SY (Selenium Yeast) or Selisseo®, from 42 to 71 weeks-of-age.

Each dietary treatment was provided to 12 blocks of cages, with 10 cages/block and 2 hens/cage (120 cages/treatment; 240 birds/treatment). The ambient, average daily hen house temperature was 30.1°C, and the average humidity was 52.3% (range 38.6 to 66.8%) throughout the experiment. Hen body weights and feed consumption were not different throughout the experiment between the three dietary treatments (P > 0.119). 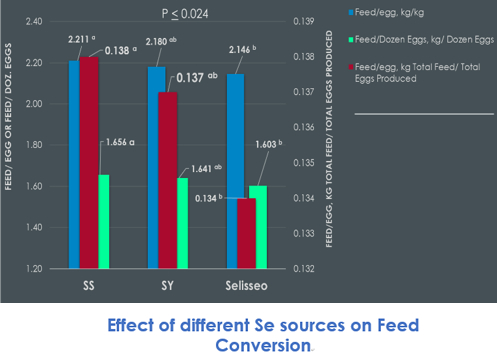 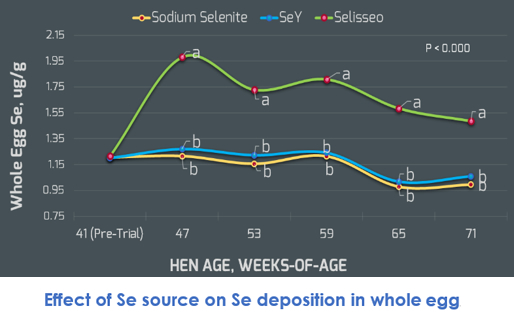 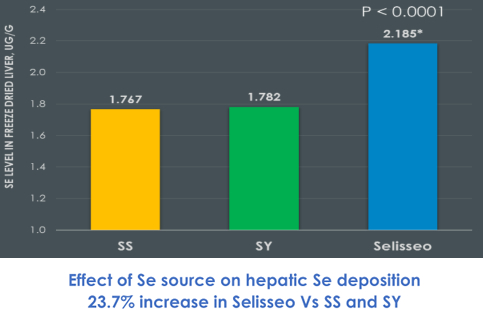 If we consider that producing 1 egg using Selisseo® results in 4 and 3 g less feed, compared to SS ad SY, 840 and 630 T/feed, respectively, would be saved on a million-hen complex. When evaluating the Se content of whole eggs from weeks 47 to 71 (Figure 2), Selisseo® showed the highest Se concentrations in the eggs (on average, 1.72 ug/g DM; P<0.0001), that is, significantly higher than both SS and SY (on average, 1.11 vs. 1.16 ug/g DM, respectively). Similarly, the hens fed with Selisseo® showed higher Se levels in the liver samples that were collected at the end of the trial (2.18 ug/g DM; P<0.001) than the SS and SY fed hens (1.77 vs. 1.78 ug/g DM, respectively). These results seem to indicate that the higher Se level found particularly in the liver samples of the hens fed Selisseo® could help produce higher amounts of selenoproteins and thus provide better antioxidant protection, which acts as a metabolic support.

This study indicates that feeding pure Selisseo® significantly enhances the transfer of Se to the egg and liver, compared to SS and SY, and appears to be a viable solution to alleviate the detrimental effects of heat stress on the performance of aging laying hens.

Article made possible through the contribution of Sumit Saxena, Michele De Marco and Adisseo