EU pork exports in 2016 grew by a third on the year to 2.3 million tonnes, boosted by shipments to the growing Far East markets, AHDB Pork reported.

Chinese volumes were up 86% to almost 990,000 tonnes, and there were also more modest increases in shipments to Japan and South Korea of 9% and 16%, respectively.

Export growth, however, slowed down as the year progressed, with volumes up only 5% year-on-year in the fourth quarter. This was due to increasing competition from US pork and some slowdown in growth in the Chinese market, according to the pork division of the UK Agriculture & Horticulture Development Board.

"These challenges are likely to remain in 2017, particularly as some recovery in Chinese pork production is anticipated in the latter half of the year" the

Tightening supplies in the latter half of the year hiked pig prices, counteracting the poor prices seen at the start of the year. Overall, value was up in line with volume, at €5.2 billion (US$5.5 billion).

Offal shipments in 2016 also grew 18% year-on-year to almost 1.4 million tonnes, again boosted by the Asian market, as shipments to China and neighbouring Hong Kong increased 30%. These two destinations made up over three quarters of the EU offal export market.

Pig fat exports were likewise bolstered by the growth in Chinese demand last year, although they remained below the levels seen before the Russian import ban. Shipments to China almost trebled on 2015, reaching 95,000 tonnes.

Coupled with a more modest increase in exports to the Philippines, China's growth countered a 19% decline in shipments to the Ukraine. Overall, volumes were up 17% on the year at just over 250,000 tonnes. 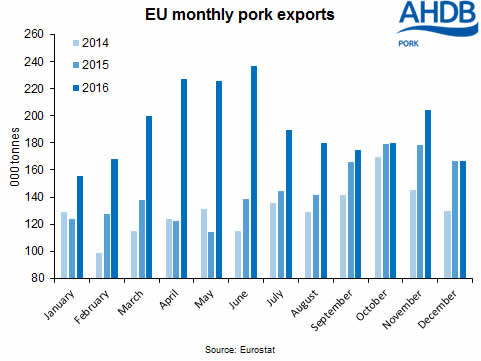