Trouw Nutrition, Nutreco's animal nutrition division, is sharing research on the role that trace mineral type can play in supporting feed stability and the shelf life, survival and functioning of ingredients such as vitamins, lipids, probiotics and enzymes. Research findings suggest that using less reactive trace mineral types in feed, like hydroxychloride-based trace minerals (IntelliBond), reduces the potential for degradation in other feed ingredients, supports enzyme stability and probiotic survival and improves mixing and nutrient delivery quality when compared to sulfate-based trace minerals. Data from trials exploring feed ingredient stability when stored or fed was presented during a webinar on 28  Jan. – "Maximize feed stability with right source of trace minerals." The presentation was part of a global webinar series.

"When we look at the feed-to-food cycle, the pressure starts at the beginning itself – from raw material procurement to bagging or at the feed mill, when you're mixing or grinding and even conditioning or pelleting," said Narendra Venkatareddy, global product manager – trace minerals with Trouw Nutrition. "We need to pay attention at each stage, especially when you talk about feed stability and … what are the right sources of trace minerals we should use to have better feed stability."

Figure 1 – Differences in bonds alter how trace mineral types dissolve and dissociate, changing their reactivity and when and how they release nutritional elements.

Sulfate-based minerals are soluble and easily dissociate because they are comprised of ionic bonds. However, organic and hydroxychloride-based minerals have a reduced solubility because both are formed with covalent bonds.

Hydroxychloride minerals have consistently low solubility and low dissociation at a neutral pH. However, they are able to provide mineral nutrition to livestock as they dissociate in highly acidic conditions – like the gastrointestinal tract. Studies done in 2000 and 2004 compared the solubility of copper and zinc sulfates to hydroxychloride copper and zinc. While sulfate-based minerals were soluble in both the neutral and acid pHs, the hydroxy minerals dissolved only after exposure to low pH conditions.1 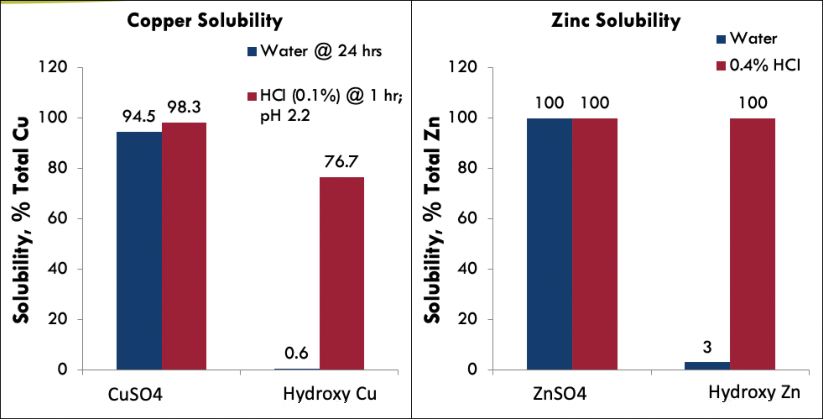 Figure 2 – Despite low solubility in natural substances like water, hydroxychloride trace minerals are highly soluble in acidic conditions such as those found in the GI tract.

The lack of solubility with water, or in neutral pH conditions, also makes hydroxychloride trace minerals easier to handle. Sulfate trace minerals can clump when they encounter moisture in the air, such as during humid or damp conditions. Even in a humid climate, hydroxy minerals remain granular and easy to mix into a feed, helping to ensure that the trace mineral is consistently spread throughout the diet.

In a comparison trial done by Trouw testing the hygroscopicity of three mineral types – limestone, a combination of sulfate minerals and a blend of hydroxychloride minerals – were exposed to high humidity conditions for a 24-hour period. The limestone collected about 0.03% (0.0008g) of moisture, the hydroxy blend about 1.44% (0.0433g) and the sulfate blend about 6.71% (0.2024g) during the trial.

Research into vitamins and lipids

There has been interest in assessing the solubility of trace minerals, because free metal ions, which would be released when the trace mineral break down, may have a negative influence on several kinds of feed ingredients. Free metal ions can degrade some feed components, reduce overall palatability, bind to antagonists and reduce fiber digestibility – especially for ruminants.

Both vitamins and lipids can be susceptible to oxidation and sensitive to influence from elements in their environments. In a series of studies looking at vitamin retention in stored feed, researchers found that when stored alone, vitamins A, E and D were relatively stable, although vitamin K saw about a 19% degradation in 6 months of storage. When mixed with a trace mineral, the degradation of all vitamin levels increased and the presence of vitamin K fell 39%. 2 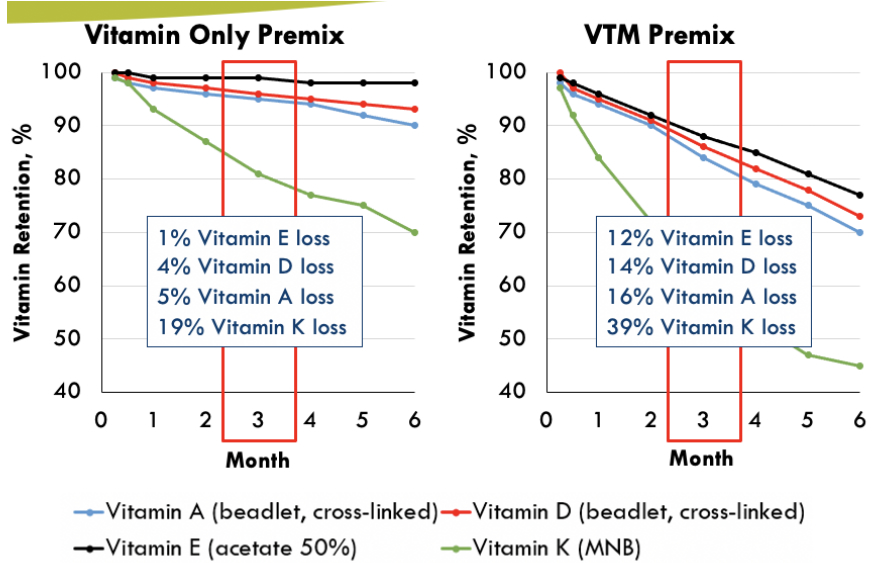 Figure 3 – Stored vitamins see some degradation over time, however, mixing vitamins with reactive trace minerals can increase the rate of decay.

Similar results were found when vitamin retention was examined individually using different types of trace minerals, including chelated minerals, oxides, sulfates and free metals. There was some degradation for every stored mixture, however, the most pronounced losses noted were for vitamin K and when any vitamins were combined with sulfate minerals or free metals.2

Enzymes, like phytase, can be added to diets to improve precision formulation and reduce the waste of bound nutrients. About 90% of poultry diets and 70% of swine diets use added phytase to release amounts of phosphorus. However, sulfate minerals can react with phytase and reduce its ability in function. A trial done in 2005 found that when 195ppm copper sulfate or hydroxy copper were mixed with phytase, enzyme retention was 17% higher when the hydroxy copper was used.5 Additional research concluded that dietary copper inhibits the efficacy of phytase. When trace minerals are soluble and able to react with the enzyme, inhibition is increased, meaning the dietary levels of phosphorus and copper are altered and may potentially cause nutritional challenges.6

In addition to additive enzymes, probiotics are commonly included in feed additives. However, free metal ions are antimicrobial and raise questions about the best way to combine probiotics and trace mineral in feeds.

In an invitro study done at the University of California, Davis, the survival of several types of probiotics was examined following interaction with dissolved hydroxy copper or copper sulfate trace minerals at 50 or 150ppm.7 When combined with 50ppm, more beneficial bacteria survived contact with hydroxy copper. When the probiotics were mixed with trace minerals at 150ppm, some types did not survive the interaction with copper sulfate at all.

Figure 4 – Care needs to be taken mixing trace minerals and probiotics in diets, especially at high levels, as reactive trace minerals can have an antimicrobial effect.

A companion study added both trace mineral sources to poultry diets for two weeks at 0, 125, 150 and 200ppm. At the end of the feeding period, gut contents were collected and mixed with different types of probiotics for two hours, then plated to assess the amount of probiotic that survived.7 In every instance, results for probiotic survival either equaled or was improved for birds on the hydroxy copper diet. 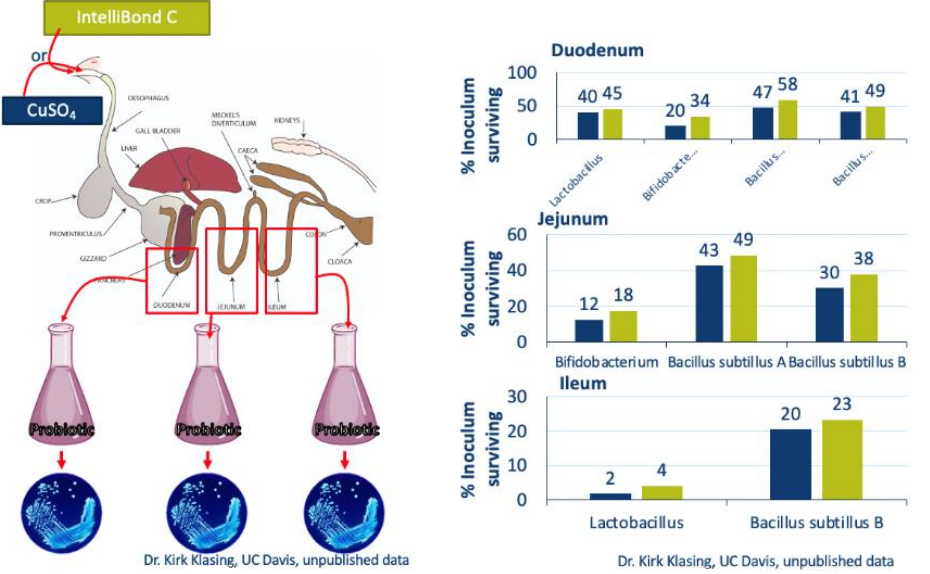 "Weak ionic bonds from sulfate trace minerals cause solubility and dissociation of metal when exposed to moisture –so it may be pellets, or while pelleting or conditioning or even in the upper GI tract," said Venkatareddy. "These free metals are pro-oxidant and accelerate oxidation of lipids or fats and also vitamins and enzymes."

That interaction may raise the price of feed, reduce the efficiency of the diet and potentially limit levels of needed nutrients. Using less soluble trace mineral sources, such as IntelliBond minerals, can support the retention of important nutrients and provide needed minerals to livestock without impeding the function of additives like probiotics and enzymes.