February 10, 2017
Is feed milling getting its groove back?
After years of disappointing stagnation, feed output turns sharply upward. Consolidation accelerates but some regions and protein lines are still floundering.
By ERIC J. BROOKS
An eFeedLink Hot Topic 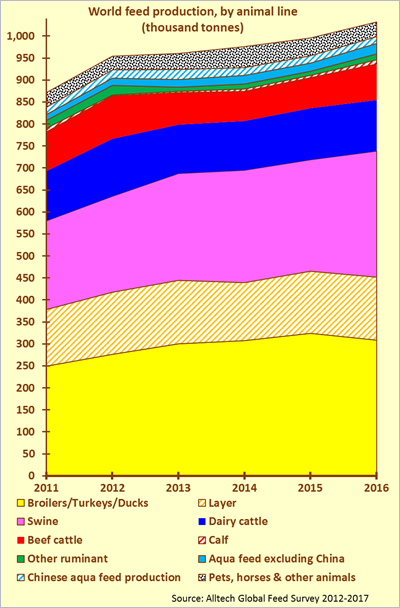 After several years of below-trend growth, rebounding aquaculture output and recovering Chinese feed production made world feed output expand by 3.7% in 2016.  This exceeds the Alltech's Global Feed Survey's average 3.4% annual growth rate over the five years since it started its survey in 2011. In our current decade, only in 2012 did feed output grow at a faster rate (6%) than it did in 2016.
Rising sharply after several years of stagnation, this sudden jump in production shows just how volatile feed demand growth can be. Rebounding strongly from the late 2000s financial crises, world feed output skyrocketed 9.3% in 2012.
Thereafter, a succession of Chinese food safety scandals, decelerating economic growth and a succession of world spanning animal disease outbreaks led to five years of growth far below expectations. This was particularly true in agribusiness's most promising, fastest growing submarkets.
In particular, an unanticipated collapse in aqua feed output made overall feed production grow at a feeble 1.4% pace from 2012 through 2015 inclusive. Coinciding with decelerating Chinese economic growth, an unprecedented succession of disease outbreaks then repeatedly struck swine farms, poultry flocks, fin fish and crustacean lines around the world.
Thus, after rising by 15.4% in 2013 and 17.4% in 2014 respectively, shrimp and salmon disease outbreaks in Europe, Southeast Asia, South Asia, Latin America and China tipped aqua feed into recession. Coinciding with bad weather and narrowing profit margins in the latter, aqua feed output fell 12.2% over two years. From from its 40.4 million tonne peak in 2013, it bottomed out at 35.47 million tonnes in 2015.
Fortunately, the past year has seen aquaculture sector made a strong, though incomplete recovery, rebounding a strong 12.5% to 39.9 million tonnes in 2016. Granted, this is still a disappointing aquaculture metric by several measures.
First, it still left 2016's world aqua feed output 1.2% below its 2013 peak of 40.4 tonnes. Barring any further catastrophic industry upsets, 2017 should finally see this record broken.
Second, while a massive aquaculture boom is underway in most of the world, it continues to suffer a massive, protracted recession in China, which accounts for 55% of world production. On one hand, outside of China, 2016 aqua feed output rebounded a whopping 29.3%, to 23.5 million tonnes in 2016, after falling 7% to 18.17 million tonnes in 2015. Reflecting the high feed conversion ratios of species cultivated in China, ASEAN and the Indian subcontinent, Asia Pacific's 74% of world aqua feed output was less than its 88%+ share of world fish farming production.
On the other hand, buffeted by everything from bad weather to shrimp diseases and competition from Vietnam, Chinese aquaculture output languished. From a peak of 23 million tonnes in 2013, it fell 24.8% over two years to 17.3 million tonnes in 2015. While most other major producers (except for Chilean salmon) boomed in 2016, China's aqua feed output fell another 5.2%, to 16.4 million tonnes.
Nor was aquaculture the only protein line to suffer surprisingly slack growth. Poultry, the livestock line expected to lead the industry's growth, saw its feed production fall 3%, from 465.5 million tonnes to 451.6 million tonnes. Besieged by bird flu epidemics in scores of countries, production of feed for poultry meat types be they chickens (-0.7%), turkeys (-4.6%) or ducks (-6%) fell by 4.6% or 15.7 million tonnes from 324 million tonnes in 2015 to 308.3 million tonnes last year.
Although this was nominally offset by a 1.3% rise in world layer feed production (to 143.3 million tonnes), poultry accounted for 43.8% of world feed demand, down from 48% in 2015. It was poultry's lowest proportion of world feed production since 2011's 43.5%.
This too was not supposed to be: By now, so-called experts had expected poultry feed to account for over half of production. Similarly, aqua feed was expected to make up approximately 10% of output –not the 3.9% it totaled in 2016.
With respect to regional growth, as has been the case since the turn of the decade, Africa leads world feed expansion, with output jumping 13% on year. This if anything, understates the continent's potential as five states (Nigeria, Algeria, Tunisia, Kenya, Zambia) led the way with their output rising by 30% over 2015 levels. 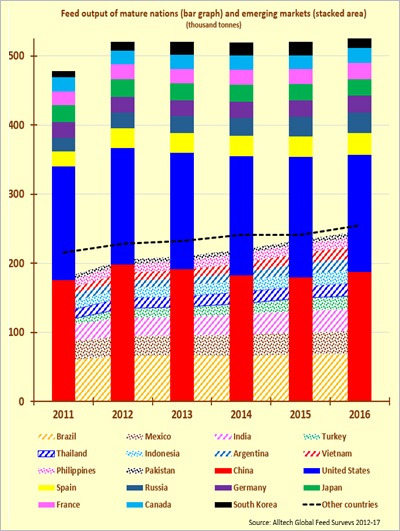 On the other hand, with its output still totaling 39.5 million tonnes, Africa's 1.22 billion people produce in one year less feed than America's 320 million people do in three months. Africa's growth metrics will make it a world agribusiness star by the mid-2020s. For now however, its output is dwarfed by that of Asia's 367.2 million tonnes, which increased by 5% from 2016 levels.
Within Asia, China remains the world's single largest agribusiness market. Moreover, mature, high meat consumption economies like South Korea and Japan add to north Asia's dominant economic weight. Indeed, while it is partly due to its recovery from devastating disease epidemics at the turn of the decade, South Korea has feed output jump has expanded at a whopping 16.8% annual rate since 2011. While that is unsustainable in the long run, South Korea does seem capable of 2% to 3% annual feed demand growth, which is impressive for an economy of that maturity level.
Within Asia itself however, the agribusiness center of gravity is shifting clearly away from China in a clearly southward direction. From 58% in 2011, China's share of Asia-Pacific feed production fell to 51% in 2016. Whereas Asia Pacific countries (excluding China) produced 74% of China's feed output in 2011, by 2016, this had risen to 96%.
Moreover, this tendency for Asian feed output to grow faster outside China is an unstoppable, long-term trend. While Asia Pacific feed output expanded 5.0%, 2016 saw it grow 4% in China and 5.7% outside of it.
The growth is concentrated developing Southeast Asian nations of Thailand, Indonesia, Philippines and most especially, Vietnam. Other countries may have larger populations or faster agribusiness rapid growth rates. Even so, no developing country in the world has the combination of exceptionally high per capita red meat consumption (31kg+), rapid economic growth and agribusiness immaturity that Vietnam offers.
Based on Alltech's figures, Vietnamese feed output rose at a 16% average rate in the years 2011 through 2016 inclusive and skyrocketed upwards 26.4% in 2016. From barely 2 million tonnes in the year 2000, Vietnam's feed production totaled 18.63 million tonnes in 2016. This enabled it to overtake Thailand (18.63 million tonnes) as Southeast Asia's largest feed producer.
Once ASEAN's largest feed producer by a longshot, Thailand has been overtaken by Vietnam and will soon also be overtaken by faster growing Indonesia (18.39 million tonnes). Advanced as it is, Thailand plays a major role exporting capital to its ASEAN neighbors. With a more mature economy and lower population, within five years, Thai feed production will take third place within Southeast Asian behind Vietnam's swine-centric agribusiness sector and poultry-dominated Indonesian feed.
Even in Philippines, the slowest of Southeast Asia's large agribusiness markets, feed output has grown 2.5 times faster than it did in China in the years since 2011. Despite having only half of China's 1.2 billion people, ASEAN's near 10% overall feed milling annual growth rate is allowing it to take over from China as global agribusiness's most important growth frontier.
While Vietnam and Indonesia will take their place alongside China as growth locomotives, they will be getting assistance from the other side of the Asian continent: Throughout the past five years of slow feed output growth, Indian output rose at an average 6% annual rate while that of Turkey rose by a whopping 18% a year. At approximately 51 million tonnes, the combined feed output of India and Turkey nearly equals the combined production of Thailand, Vietnam and Indonesia.
The important thing is that with Southeast Asia, India and Central Asia picking up, world feed demand growth is no longer an entirely China-centric affair. This in turn compliments aqua feed's decentralization from China-dominated output to a more decentralized model with large producers dispersed across ASEAN, the Indian subcontinent and Latin America.
As the world moves away from the past five years of exceptionally nasty livestock disease outbreaks, we should see growth resume its expected, above 3% pace and be spread out more evenly across the world's many livestock lines and regions.
Coming Next: Feed mill operations, scale economies and value.