Trouw Nutrition, a Nutreco company is sharing research on the role that trace minerals play in supporting immune system functioning in livestock, with a special focus on swine. Studies show that trace minerals play an important role in the functioning of the immune system and that stable or more bioavailable mineral sources such as hydroxychloride-based minerals are better able to support feed intake and improve immune system response during a stress challenge. Trial details were shared in a webinar – Trace Minerals, the forgotten solution to managing the immune system. The presentation is part of an ongoing webinar series.

The role of trace minerals

Trace minerals are often not contained in high enough concentrations in basal raw materials to fulfil animals' nutritional requirements, therefore they must be supplemented in the diet.  For example, Copper, Zinc and Manganese are required to support many metabolic processes and must be supplemented to meet the animals nutritional requirement.1 These amounts of mineral are intended to be absorbed across the intestinal barrier to meet animals' systemic and physiological demands by supporting elements such as tissue integrity, enzyme functioning and processes, immune competency and animal performance or wellbeing.

Copper has been linked to:

* Acts as a signaling molecule

* The development of bone and cartilage

* Function of the brain and nervous system

In addition to the performance attributes noted above, zinc, copper and manganese can support immune competency, both by managing the oxidative status, and supporting the immune response itself.

While supplemental minerals support livestock in reaching their full genetic potential,  not all trace mineral sources provide the same benefits. Some more soluble sources, such as sulphates – can have negative interactions with other elements in the diet.

In a trial looking at the inclusion of  IntelliBond copper trace minerals compared to copper sulfate in stored feed, researchers found that the type of copper added mattered. Adding 200ppm copper sulfate to the diet accelerated degradation of dietary levels of vitamin E. By day 41 in storage, vitamin E content declined by about 70% compared to a control feed with no added copper.2 However, when hydroxychloride-based copper was added, results were quite similar to those seen in the control feed – vitamin E levels were three times higher than when copper sulfate was used. (Figure 1) 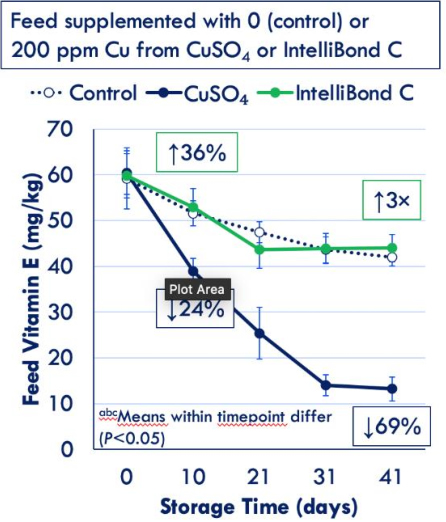 Figure 1 – Vitamin levels may stay higher and remain more consistent when more stable forms of trace mineral are used. When reactive trace minerals are added to diets, they can increase the rate of degradation for other nutrients.

It is well known that trace minerals have a high affinity with the antinutritional factor, Phytate.    If the source of trace mineral is highly soluble, this can cause the trace mineral to bind to the phytate, blocking the effect of phytase enzymes. This could reduce the amount  phosphorus released from the phytate structure. A comparison was carried out, in which copper citrate, copper chloride, copper lysine, copper sulfate and hydroxychloride copper were added to a phytate and phytase solution at 0, 62.5, 125, 250 or 500ppm copper. A significant reduction in Phytase phosphorus hydrolysis occurred with all copper sources, decreasing with increasing copper level. However,  the IntelliBond Copper treatment did not see a significant reduction in phosphorus hydrolysis at 62.5, and 125 ppm copper, indicating that IntelliBond has the lowest level of interaction with phytate, due to its very low solubility in feed, therefore preserving the most phosphorus release. (Figure 2) 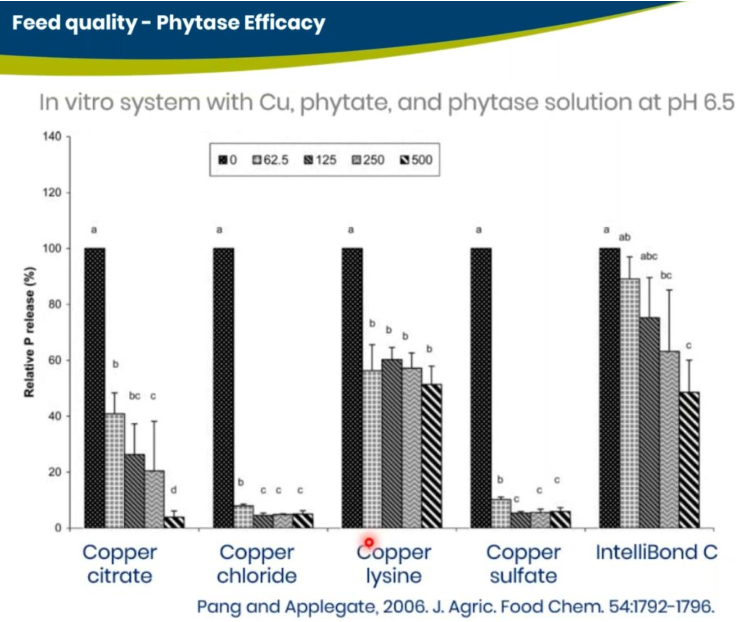 Figure 2 – Mineral source can inhibit the function of the enzyme phytase, reducing the amount of phosphorus released for animal use and increasing the amount excreted.

Select types of trace mineral also can have a negative interaction with probiotics. Because sulfate-based trace minerals are highly soluble , the mineral can interact with probiotics in feed.4 However, minerals with a stronger bond – like  IntelliBond, can help prevent a reduction in the beneficial bacteria in the GI tract, which increase in the  presence of response dietary probiotics. It has been seen that where trace minerals were combined with a probiotic, higher levels of beneficial bacteria can survive such as Bacillus subtills, Bifidobacterium, and Lactobacillus when either 50 or 150ppm  copper from IntelliBond C was added to the mix compared to the equivalent addition  from  copper sulfate. (Figure 3) 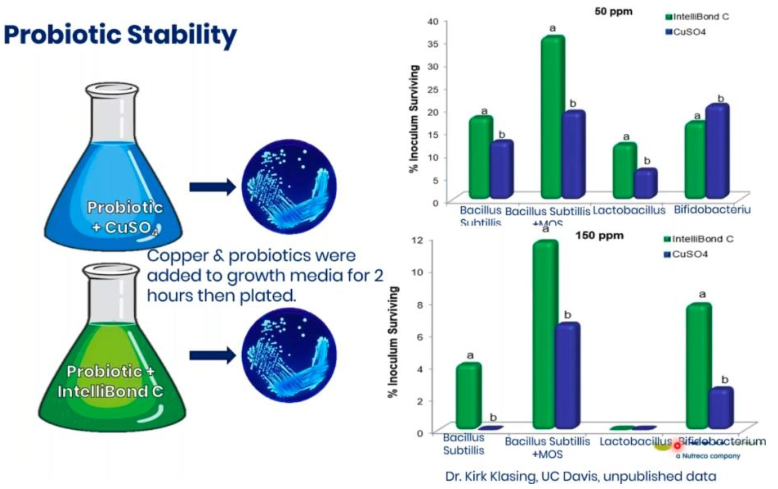 Figure 3 – Some types of trace mineral may reduce the efficiency of probiotics. However, minerals with stronger bonds, like IntelliBond minerals, demonstrate less interference.

An animal's innate immune system includes several non-specific mechanisms that provide a first line of defense against pathogens and disease. These protections include specialized cells such as macrophages and neutrophils, structural elements such as skin and mucus membranes and physiological responses like pH and oxygen levels, which can be regulated by cytokines – IL-1, IL-6 and TNF-a.

* An indicator of disease

* A stimulator of internal processes that suppress appetite and induce fever

* Linked to the reduction in lean growth

* Is a strong signaling molecule released by most immune cells

* Tells the hypothalamus to induce a fever

* Stimulates release of histamine and can induce localized inflammation

Some specialized cells also play a role in the immune system like T and B lymphocytes, which produce antibodies, kill invading organisms and add memory to immunity, along with dendritic cells. Other cellular responses to pathogens include the production of reactive oxygen species, which are released during physiological processes. They can induce inflammation, lipid peroxidation, oxidation and injure cells leading to cell death. However, super oxide dismutase (SOD) is an anti-inflammatory enzyme that helps provide a balance to pro and oxidant molecules. Neutrophils and macrophages also provide an internal defense against inflammation.

Trace minerals including zinc, copper and manganese  catalyze  SOD, and mineral availability also influences the efficacy of neutrophils and macrophages. Zinc and copper play a role in SOD1 and 3, which are present in cytoplasm and the extracellular region of the cell. Additionally, zinc alters neutrophils ability to move from the bloodstream to localized infections.

Manganese SOD acts as detoxifying agent in mitochondria and helps protect mitochondria from reactive oxygen species. The presence of supplemental amounts of manganese improves oxidative protection for cells and, conversely, inhibiting the function of manganese SOD may lead to cell and DNA damage from oxidation.

Weaning is a period when animals need a strong immune response and may be least able to provide it. The stresses of weaning include maternal separation and changes in diet, which can lower feed intake and lead to gut health issues. This combination leaves a young animal at risk of opportunistic pathogens, especially given the  immature immune system. Reduced feed intake coupled with a compromised and immature immune system can lead to reduced growth and performance.

In a 2014 feeding trial with piglets, animals were traced to determine the average amount of feed they ate in the eight days post-weaning.5 Results indicated that there could be a wide variation in feed intake, with some animals eating regularly and others having no feed for up to three days following weaning. Piglets with poor eating habits can become animals with reduced growth and, potentially, future digestive problems.

One element that could influence piglet feed intake is the type of trace minerals included in the post-weaning diet. In a study done by Trouw Nutrition in 2016, 72 piglets were tracked to examine their feed intake preference, based on the type of trace minerals included in their diets.6 Trial feeds contained 160ppm copper and 110ppm zinc from either a sulfate or a hydroxychloride form.  Piglets consumed significantly more of the IntelliBond diet, compared to sulphate, indicating  a clear preference toward consuming a diet which contains IntelliBond, compared to that of sulphates. This indicates that IntelliBond is ‘taste neutral', preventing the depression in feed intake often seen when feeding highly soluble inorganic trace minerals.

With young livestock, there can be a period of flexibility, where nutritional support can make up for early stresses helping animals reach their genetic potential. In piglets this period lasts for about the first 6 weeks.7 During that window, stressed systems can be effectively reprogrammed  to allow animals to reach improved results.

Blood samples were checked for TNF-a and IL-1 to assess the severity of the acute LPS response. Three hours post-challenge higher amount of TNF-a were found in blood samples from pigs receiving sulfate-supplemented diets indicating a less efficient response to acute stress. Similarly, larger amounts of IL-1 also were found in the blood of pigs eating the sulfate-based diet. Indicating a lower health status within the sulphate groups.  Additionally, it was seen that equivalent levels of TNF-alpha and IL-1 were found in the high-level sulphate group, compared to the half-level IntelliBond group. This indicates that taking into account bioavailability, 50% supplementation of trace minerals from IntelliBond (relative to sulphate) could give equivalent immune support. (Figure 4)

Figure 5 – Animal growth results were improved when IntelliBond trace minerals were included in feeds in place of sulfate minerals.

Overall, the project indicated that replacing 100% of minerals used in early swine diets with hydroxychloride-based minerals, or IntelliBond minerals, improved the efficiency of the immune system response to an acute disease challenge and supported animals during a period of chronic stress. Following a chronic LPS challenge, pigs receiving diets with hydroxychloride minerals produced lower levels of TNF-a and IL-1 stress indicators. (Figure 6)

Dietary trace minerals are needed to support the functioning of the immune system in production species. However, the type of trace mineral used in diets plays a role in the optimal functioning of an animal's immune response – especially when low levels of mineral are used. Selecting mineral sources — like hydroxychloride minerals /IntelliBond — that are stable in the feed and more bioavailable to the animal provides the needed nutritional amount of trace minerals for absorption.

"Mineral source is key for supporting the immune system in commercial conditions," said Alice Hibbert, Global Programme Manager Trace Minerals, Asia with Trouw during the webinar. "Trace minerals, through their role in super oxide dismutase and also through their role in mobilizing the immune cells in the innate immune system are able to further help the immune response. Minerals are critical for immune function [and] IntelliBond minerals are more stable in feed and able to deliver more available trace mineral to the sites of absorption."

Study results exploring trace mineral type demonstrated that during periods of stress, animals may have reduced feed and mineral intake. At those points, like post-weaning, it can be more important that animals receive diets with high quality, absorbable minerals to minimize negative results from stress and allow animals to reach their full genetic potential.

Article made possible through the contribution of Trouw Nutrition
Video >
Technical Paper >
Role of organic Se in sustaining egg production in aged laying hens under heat stress
Under heat-stress conditions (i.e. high temperature and humidity) and as the hen ages, oxidative stress increases due to the synthesis of reactive oxygen species (ROS). When the h ...
Oxidative stress in the poultry gut: Potential challenges and interventions
The gastrointestinal tract (GIT) provides the biological environment for nutrient digestion and absorption, and protection from pathogens and toxins. Broilers are fast growing beca ...
Revisiting oxidative stress and the use of organic selenium in dairy cow nutrition
Among feed-derived antioxidants, selenium (Se) was shown to have a special place as an essential part of 25 selenoproteins identified in animals. Organic Se, in the form of selenom ...