A total of 360 weaned pigs (DNA; 241 × 600; initially 11.9 ± 0.02 lb) were used in a 35-d study evaluating the ability of varying lipid sources to replace ZnO or carbadox in early nursery pig diets. Pigs were weaned at approximately 21 days of age and allotted to pens based on initial weight in a completely randomized design to one of six dietary treatments: 1) Negative control (no added ZnO or carbadox); 2) Control + 3,000 ppm Zn from ZnO in phase 1 and 2,000 ppm Zn in phase 2; 3) Control + 50 g/ton carbadox; 4) Control + 1% C6:C8:C10 medium chain fatty acid (MCFA) blend; 5) Control + 1% Proprietary Oil Blend (Feed Energy Corp., Des Moines, IA); and 6) Control + 1% monolaurate blend (FORMI GML from ADDCON, BitterfeldWolfen, Germany). There were 6 pigs assigned to each of the 10 replicate pens per treatment. All experimental diets were isocaloric, with choice white grease used to balance the energy level. From d 0 to 19, pigs fed the ZnO or carbadox diets had greater (P < 0.05) average daily gain (ADG) than pigs fed the control or Feed Energy oil blend, with pigs fed the MCFA blend or FORMI GML intermediate. These effects were mostly driven by feed intake, which was greater (P < 0.05) in pigs fed diets containing ZnO or carbadox than by pigs fed diets containing the 1% MCFA or Feed Energy oil blends. Dietary treatment had a marginally significant effect (P > 0.078) on feed efficiency (F/G), with the best feed efficiency for pigs fed carbadox and the poorest feed efficiency in pigs fed the control diet. Both ZnO and carbadox improved (P < 0.05) fecal consistency during the treatment period. In summary, ZnO and carbadox continue to be valuable additives to maximize growth in early nursery pig diets. Some lipid products, such as the monolaurate-containing FORMI GML, show greater promise to replace these antimicrobials than others. These findings suggest that additional research is warranted to identify optimal lipid blends that can replace feed-based antimicrobials in early nursery pig diets without negatively impacting fecal consistency or feed intake.

Antimicrobial agents, such as ZnO and carbadox have been utilized for decades to improve nursery pig health and growth performance, with one of the possible mechanisms being that they may prevent and control disease. Despite the benefits of these products, there is consumer and regulatory pressure to reduce the use of heavy metals and feed-based antibiotics. Carbadox is disallowed in most European pork production, and regulations are pending to prevent the use of high levels of ZnO due to environmental or health concerns. Within the United States, both feed additives are allowed and strictly regulated by the U.S. Food and Drug Administration to avoid the risk of potential residues and to maintain environmental and consumer health. However, as consumer pressure mounts to remove both from modern pork production, the swine industry is searching for antimicrobial replacements that can yield the same positive effects, while avoiding any negative consequences. Controlled research has reported increased growth performance when various lipid-based additives, such as MCFA, are fed in mid-to-late-nursery diets, even in the absence of health challenges.2,3,4 However, field research has shown mixed results, especially when supplementation begins in early nursery. Therefore, the objective of this study was to evaluate the effectiveness of three different lipid-based additives as replacements for ZnO and carbadox on growth performance and fecal consistency in early nursery swine diets.

Pigs and feeders were weighed on d 0, 7, 19, and 35 to determine ADG, average daily feed intake (ADFI), and F/G. Fecal scoring was conducted by two independent, trained scorers on d 0, 1, 2, 7, 14, 19, 28, and 35 to categorize the consistency of piglet feces per pen. Fecal scoring was categorized as a numerical scale from 1 to 5 as follows: 1, hard pellet-like feces; 2, firm formed stool; 3, soft moist stool that retains shape; 4, soft unformed; and 5, watery liquid stool. Data were analyzed using the GLIMMIX procedure of SAS (v 9.4, SAS Institute, Inc., Cary, NC) with pen as the experimental unit. Results were considered significant if P ≤ 0.05 and marginally significant if 0.05 > P ≤ 0.10.

As expected, there were no discernable differences (P > 0.10) between treatments in pigs fed common diets during phase 3 (d 19 to 35). However, there was sufficient difference in early growth performance to cause significant differences in overall ADG and ADFI from d 0 to 35. While all treatments had pigs starting with the same average weight, up to 0.7 lb difference in body weight was observed among treatments just one week post-weaning. By the end of the 35-d experiment, pigs fed diets containing ZnO or carbadox were at least 2.3 or 1.6 lb heavier than those fed control diets or diets containing the MCFA or Feed Energy vegetable oil blends.

Initial fecal scoring on d 0 of the experiment showed similar fecal scores for all pigs at placement. However, on d 1, 2, 7, 14, and 19, pigs fed the ZnO and carbadox treatment had significantly lower (P < 0.05) fecal scores when compared to those fed the control diet or diets containing MCFA blend, Feed Energy vegetable oil blend, or FORMI GML. Upon transitioning pigs to the phase 3 common diet on d 21, fecal scores were standardized across treatment.

In conclusion, these results show that ZnO and carbadox are valuable additives to help maximize performance in the early nursery period. Some lipid-containing feed additives, such as FORMI GML, may result in similar performance as these antimicrobials, while others may reduce feed intake and subsequent growth when included in early nursery diets. Thus, additional research is warranted to further study the effectiveness of different types of lipids to replace ZnO or feed-based antibiotics.

Brand names appearing in this publication are for product identification purposes only. No endorsement is intended, nor is criticism implied of similar products not mentioned. Persons using such products assume responsibility for their use in accordance with current label directions of the manufacturer. 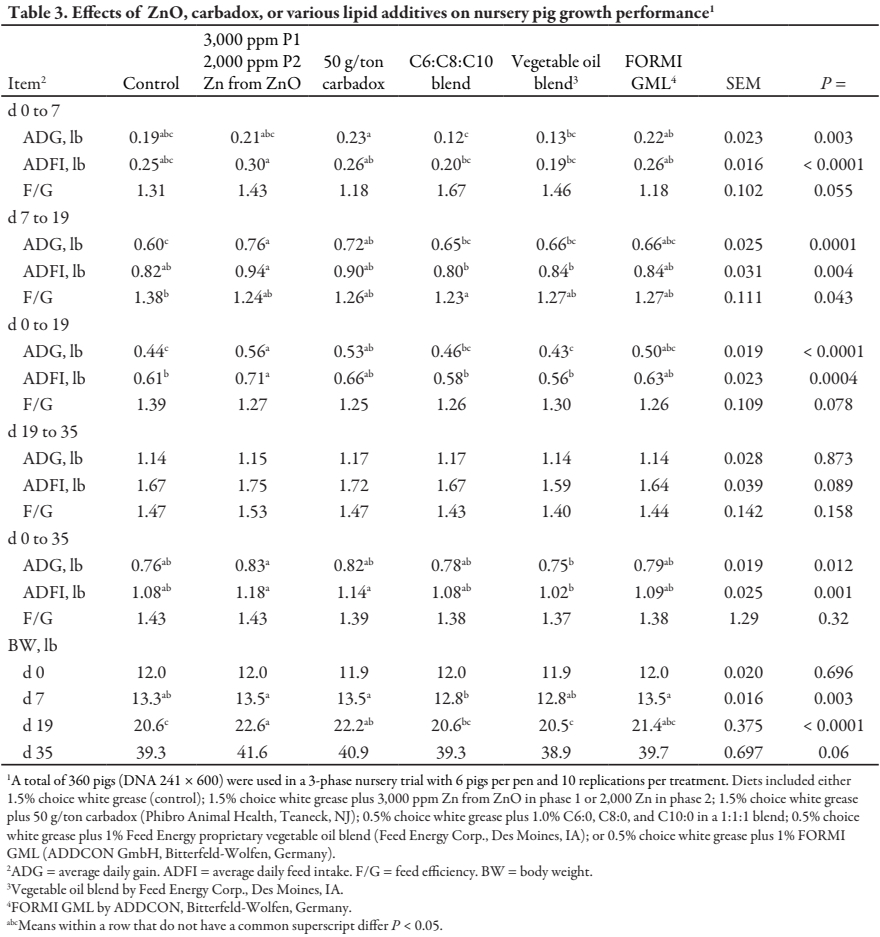 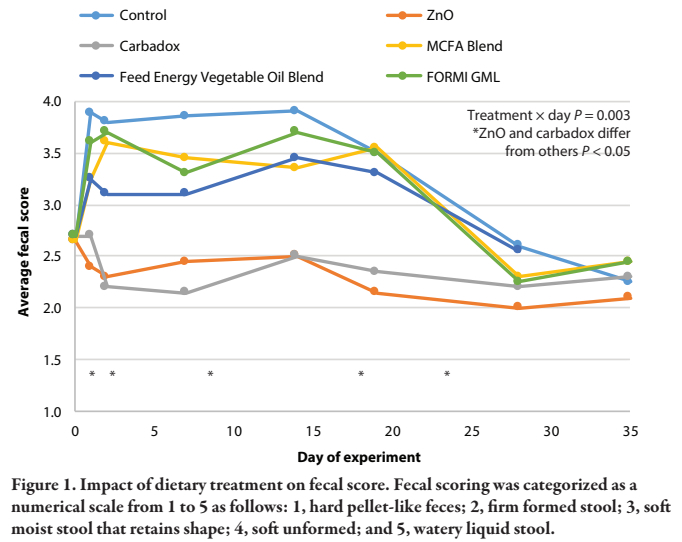 Article made possible through the contribution of P. L. Dahmer et al. and Kansas State University