January 13, 2020
Plagues, pigs and a powerful dragon: China's dominates the swine meat trade
World pork exports are booming but without China, they would have stagnated for a second consecutive year. Devastating swine sector misfortunes give Beijing the power to decide who will enjoy export-led growth.
By Eric J. Brooks
An eFeedLink Hot Topic 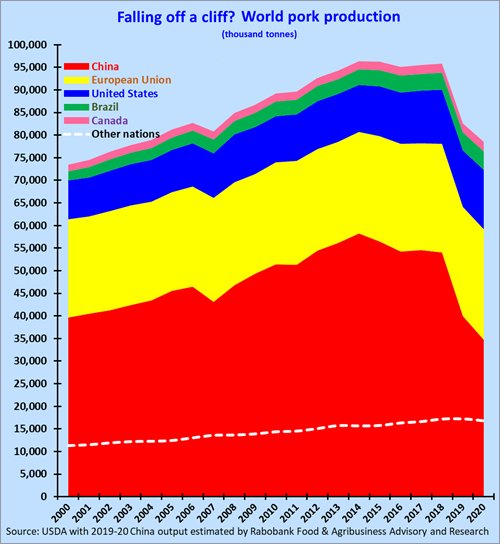 Despite being blocked for almost half of 2019, surging Canadian pork exports to China successfully offset lower shipment volumes to America, Philippines, South Korea, and Japan. Had China not banned Canadian pork for five months, it would have easily overtaken the neighboring United States as Canadian pork's biggest export destination by volume.
The USDA estimated that "If YTD [year to date] export numbers [momentum] to China had been maintained throughout 2019, Canada would have been on track to export 442,000 metric tonnes of pork to China." It instead exported approximately 200,000 tonnes.
With high import tariffs hindering US pork's entry to China and a diplomatic row banning Canadian pork for much of the year, more than 740,000 tonnes of 2019's 1.039 million tonne increase in Chinese pork imports was accounted for by EU suppliers.
With normal, liberalized pork trade between China and Canada now restored, we can safely assume that 2020 Canadian pork exports to China will rise by 250,000 tonnes. We estimated that instead of staying flat near 1.30 million tonnes, Canadian pork exports will rise by 19.2% or 250,000 tonnes, to 1.55 million tonnes.
Second, mid-January's announced US-China trade liberalization agreement means that while 2020 will be another prosperous year for swine meat suppliers, North America will take over from Europe and Brazil to become the locomotive of export-driven growth. European producers will continue to enjoy prosperity amid severe production restraints.
Going forward, some market changes are readily apparent. First, the liberalized entry of US and Canadian pork will make life more difficult for European suppliers. The higher prices and inability of most EU suppliers to boost production further will result in them losing market share to Canadian, American and Brazilian pork producers. Hence, it would not be surprising if the USDA's current forecast of the EU exporting 3.9 million tonnes of pork is scaled back into the 3.7 to 3.8 million tonne range, with the entire difference being due to China liberalizing its imports of North American pork.
Second, among European producers, only supply-elastic Spain will experience significant export growth. Moreover, its high-end pork will face competition from high quality, lower-cost North American and lower quality but heavily discounted Brazilian pork.
Third, with the entire increase in the world pork trade volumes coming entirely from China, Beijing is in a position to upset ALL the above pork export forecasts and make a political decision on who the world pork market winners or losers can be. Even when disaster an ASF hits Chinese feed and livestock, its power over the world market just keeps growing.