America's swine industry is caught between skyrocketing feed costs and slack domestic demand on one side and high productivity and strong export growth on the other. This creates a paradoxical situation: Unlike beef or poultry, US pork will significantly increase its share of the global swine market even as its domestic consumer base stagnates.
Pig productivity, sow fertility rising 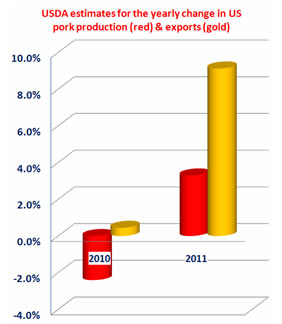 At home, the combination of rising productivity and slack consumption means that America has nominally fewer hogs but continues to produce almost the same amount of pork.  According to the USDA's December report, 2010's 58.547 million swine are down by approximately 0.83% from 2009's 59.037 million.
Similarly, at 5.778 million, 2010 sow numbers were down 1.2% or 72,000 from 2009's 5.850 million. In the same vein, the USDA projects December 2010 to May 2011 sow farrowings to fall by 80,000 over the previous year and by 300,000 over the same period from three years ago. With today's sow herd still some 7.3% below its late 2007 peak of 6.233 million, there does not appear to be much momentum to raise numbers by much going forward.
Moreover, when one examines swine's supply chain, soaring input prices are playing a large role in this supply stagnation. Since late June 2010, corn and soy have risen by 85% and 30% respectively; causing hog feed costs to increase by more than half over this time.
But that is just one half of a three-year long trend, with high input costs keeping swine numbers down. On the other side of the market, since 2007, American per capita pork consumption has fallen some 7.5%, from 22.7kg in 2007 to an estimated 21.0kg this year -and looks set to fall further.
Fortunately, the US hog sector is becoming increasingly export-driven and this provides a ray of hope.
While America's domestic market and swine production remains flat, the USDA's most recent WASDE report projects 2011 pork exports to rise 9.1% by volume and more than 10% by value from the previous year's level.
However, the export picture at ground level exceeds even USDA forecasts. Philip Seng, CEO of the US Meat Exporters Federation (USMEF) stated that, "Pork exports accounted for 22% of production and $41.33 per head value in September [2010] compared to 21% and $35.30 last year.  Year-to-date, pork exports account for 23.7% of production and $43.62 per head value."
Indeed, US pork exports rose from approximately 8% of production ten years ago to roughly 24% this year. Going forward, from 2011 to 2015 the USMEF and USDA expect American pork exports to keep increasing by 3.5% to 4.0% per annum. This is much faster than the expected export growth of US poultry, US beef or even the export growth of its swine exporting rivals.
The reason for this impressive performance is obvious. US pork producers are among the world's most efficient. They especially enjoy a cost advantage in rapidly growing Asian markets. Australia, which has the lowest transport costs to Asia, has hog prices more than double those of the United States.
Cost-wise, only Canada and Brazil have lower swine production costs than the United States. With Brazilian pork is still dogged by quality issues, that makes Canada the US's main pork exporting rival. And we often see this to be true. In many markets such as Japan, Taiwan and Korea, we see US and Canadian pork holding first and second place market shares in the 20% to 40% range, often just a few percentage points from one another.
However, both the Brazilian and Canadian currencies have been on an upward trend and the US has narrowed its production cost difference with them over the last ten years. This is particularly true of Canada, as the Canadian dollar went from $0.60/US$1.00 to C$1.00/US$1.00 over the last ten years. All this leaves US pork in a very advantageous position in developing Asia's fastest growing economies.
Indeed, the combination of high feed prices and strong export demand is putting US hogs on track to record prices. According to Chris Hurt, an agricultural economist with Purdue University, 2011 should see exports rise by another 10 percent. Hurt concludes that record pork prices will arise, "from smaller per capita US supplies and from much stronger demand driven by recovering US and world economies." He predicts that, "Live hog prices in 2011 are expected to exceed $60 per live hundredweight, or over $80 on a lean basis." He does however caution that, "These record prices will be overshadowed by record costs of production."
Indeed, we can already see high feed and pork prices at work. On the supply-side, whereas most analysts had expected corn to average US$5.70/bushel this year, it is currently trading around US$6.35/bushel and looks to be headed higher. Demand-wise, as of early January, US hog futures were approximately 78cents/pound, up some 15% from a year earlier.
For this reason, while hog numbers are projected to fall nominally this year, profit margins will widen. With hog performance increasing, slightly more pork will be produced, though not by enough to cause a significant rise in production. However, with feed having gone up in price by more than pork, there is considerable pressure to raise this meat's price floor.
This already appears to be happening. Hurt notes that while live hogs and lean hogs historically top out around US$67 and US$90 respectively, futures prices for spring and summer lean hogs have already topped $90. At this time, many believe prices will reach $75 for lean and US$100 for live hogs, with some predictions going to US$110 for the latter.

With supplies constrained by high feed costs and export demand high, many US consumers will be priced out of their own pork. Already on a years-long declining trend, Hurt expects US per capita pork consumption to fall by another 3 percent or approximately 0.6kg. A record proportion of 2011's American pork production will be exported.
Despite healthy export demand and a propensity to fetch higher prices abroad than at home, industry consensus currently implies that output will not expand significantly for another year. Jim Long, CEO of Genesus Genetics believes that, "US$80 lean [hogs] must be predictable and expected in 2012 before we see significant herd expansion." Of course, even this price floor would have to rise if corn and soy remain above US$6/bushel and US$13.50/bushel respectively.
At the same time, herd expansion might also be held back by fast rising productivity. This is especially true of America's sow population.
According to the USDA, 2010's hog litter size rose from 9.70 to 9.89, a 1.86% rise from the previous year. Long states that, "we see genetic trends that indicate a gain of 0.25 pigs per litter per year." When combined with superior feeding, constantly improving pig genetics and low domestic demand growth, this implies that export-driven growth in US pork demand could be met from a statistically insignificant increase in hog numbers and far fewer sows than are required today.
Long's predictions imply that within a decade, America's average sow litter could be 12.5 piglets. He concludes that, "At 12.5 we would need 25 per cent fewer sows to produce just as many pigs."
Wanted everywhere - except in the USA itself?
When all these trends are taken together, the following picture emerges. Whereas America's poultry and beef exports will hold their own, the United States stands to make significant gains in its share of the world pork market.
According to the FAO, America accounted for less than 20% of global exports in 2000 but approximately 30% in 2010. It is on track to account for approximately 40% of global pork exports by 2018. Canada, Brazil and the EU, its main exporting rivals, are bogged down by higher cost bases and rising currency values. In the case of Brazil, a combination of fast domestic demand growth and export certification issues dogs hamper its long-term export potential. With a rising, state of the art hog raising productivity and a mature domestic market, America finds that its pork is in high demand everywhere except in its home market.
All rights reserved. No part of the report may be reproduced without permission from eFeedLink.
Video >
Technical Paper >
Raising the phytase podium
Phytate is the main storage form of phosphorus in all grains, which represent the basis of most plant-based diets used in animal production. To improve phosphorus availability and ...
Exogenous enzymes as zootechnical additives in animal feed: A review
Enzymes are widely used in the food industry. Their use as a supplement to the raw material for animal feed is a current research topic. Although there are several studies on the a ...
The evolution and application of enzymes in the animal feed industry: the role of data interpretation
Enzymes have been used commercially for nearly 40 years and save significant costs through sparing of expensive nutrients but the mechanism by which this is achieved is still debat ...