The pathway to zinc oxide-free piglet production: Success starts with the gut

The pathway to zinc oxide-free piglet production: Success starts with the gut

The use of pharmacological levels of zinc oxide in piglet production

Pig producers across the European Union (EU) are now preparing for the upcoming ban on zinc oxide (ZnO), which will come into effect in June 2022. Under this new regulation, the use of therapeutic doses of ZnO in animal feeds for preventing and controlling post-weaning diarrhoea (PWD) in young piglets will no longer be authorised in the EU. While the use of ZnO as a feed additive will still be permitted after this date, it will only be allowed at the maximum legalised dosage of 150 ppm total dietary zinc.

This is not the first time that regulations pertaining to the use of pharmacological levels of ZnO have been introduced. For example, China drastically reduced its authorised dietary zinc supplementation in 2018, which saw levels reduced from 2,250 ppm to 1,600 ppm. Regulations in Canada are also changing, whereby the level of ZnO allowed in piglet feeds will be reduced to nutritional levels of just 350 ppm.

The use of high levels of ZnO in piglet feeds (2,000–2,5000 ppm or higher) has been standard practice in the swine industry ever since the ban on antibiotics as growth promoters by various governmental bodies, such as the European Parliament in 2003. The rationale behind this widespread use is attributed to the fact that ZnO is proven to be an effective and relatively low-cost nutritional strategy for controlling E. coli infections and preventing PWD; conditions that cause significant economic losses in modern pig production. Consequently, the growth performance and feed intake of pigs is also likely to improve in the initial period after weaning.

If ZnO is recognised as a viable solution for improving the performance of newly weaned pigs, you might ask why the EU and other countries have decided to impose such restrictions? It has become apparent that the widespread and prolonged utilisation of ZnO at such high levels has several environmental and health implications, in addition to its contribution to the spread of antimicrobial resistance (AMR). For instance:

1.   Zinc toxicity: Zinc remains a heavy metal and is, therefore, toxic to many living organisms, including pigs. Research studies report that prolonged use of therapeutic levels of ZnO may negatively impact the performance and health of piglets, as demonstrated by a noticeable decrease in feed intake.

2.  Environmental pollution: The environmental concern regarding ZnO is predominantly due to the pollution of soils and surface water, resulting from the application of zinc-rich manure on land as an organic fertiliser. The accumulation of zinc in the soil may also affect the absorption of other trace elements in the ground, such as iron.

3.  Antimicrobial resistance: Several studies have highlighted ZnO's role in accelerating the spread of antibiotic-resistant genes and heavy metal tolerance genes. For example, high levels of ZnO may increase the proportion of multi-drug-resistant E. coli in the piglet intestine.

4.  Changes to gut microbial pollution: A final concern related to pharmacological ZnO utilisation in piglet feeds is its potential to cause modifications of the gut microbial composition of piglets during the initial period after weaning and, consequently, intestinal development and health in piglets may be negatively affected.

Given the emerging environmental and health concerns, the proposed reduction in the use of ZnO in piglet feeds should, therefore, generate several potential benefits. With that in mind, the upcoming ban could be viewed with a certain level of optimism within the European pig industry. Potential benefits of the ZnO ban may include:

·   A reduction in environmental pollution due to less zinc pollution in soils and surface water.

·  A lesser amount of antimicrobial resistance.

·  An improvement in piglet health and performance by preventing zinc toxicity.

·  Support for a more stable microbial composition of piglets during the early post-weaning period by avoiding the suppression of beneficial bacterial growth, such as Lactobacilli.

A "silver bullet" solution does not exist

As you are probably now aware, there is no "silver bullet" solution or single alternative for ZnO to prevent PWD in young piglets. Instead, the solution against PWD should be the adoption of a holistic strategy on-farm, combining optimal management and health practices, as well as effective feeding approaches capable of alleviating PWD and reducing ZnO dependence (see Figure 1). It is beyond the scope of this article to discuss each of these strategies in detail, but approaches that have proven beneficial include:

2)  Management: Promoting good gut health and development in sows and piglets, making sure that piglets ingest an adequate amount of immunoglobulin-rich colostrum, provision of easily digestible and palatable creep feed from as early as 4–10 days of age, weaning heavier and older piglets and the provision of clean, fresh water to piglets at the correct flow rate and drinker height for the age and weight of the piglets. 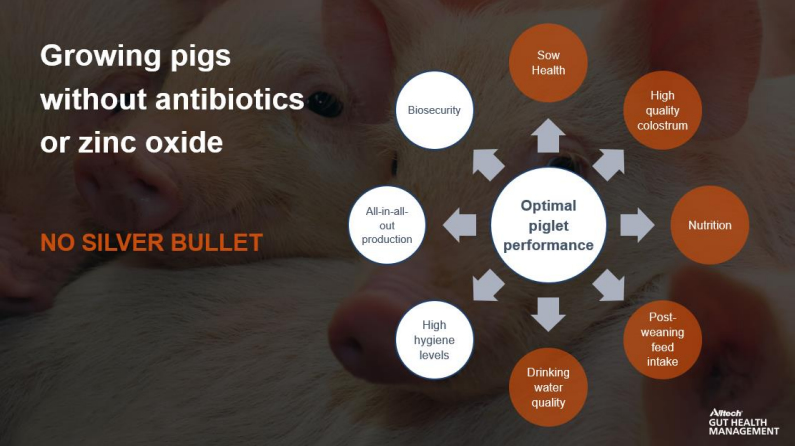 Figure 1:  A holistic approach to achieving optimal pig performance in the absence of therapeutic levels of zinc oxide in piglet feeds

In commercial pig production, ensuring that piglets get off to a healthy start in life will help to maximise their lifetime growth performance (e.g., feed efficiency and average daily gain) and reduce the reliance on antimicrobial use. As a result of improved herd performance and lower medication use, the producer's profitability will also be positively impacted. The key to achieving this involves, first, establishing good gut health and development in sows. Maternal gut health is inherently linked to that of their piglets (see Figure 2); therefore, it impacts long-term piglet health, performance and survival. If the microbiota of the sow before or during farrowing influences the microbiota of the piglets, then establishing and maintaining a healthy gut in sows will result in the maternal transfer of indigenous beneficial microbes to the developing foetuses in utero through the placenta and to the suckling piglets through maternal colostrum and milk during lactation. Unlike infants, piglets are born without maternal antibodies, making them vulnerable to infection. Therefore, increasing the immunoglobulin concentration in the sow's colostrum will improve the piglet's passive immunity and, as a result, will help to build their immune system and provide them protection from disease until they begin to actively produce their own antibodies. Incorporating natural feed additives into the sow's diet during gestation and lactation, such as Actigen® (Alltech), have been shown to increase colostrum quality (i.e., immunoglobulin content) and, subsequently, support the gastrointestinal integrity and stability of the piglets that consume it.

Figure 2:  Establishing and maintaining a healthy gut in sows will have a positive impact on the growth and health of the subsequent offspring

Second, supporting gut health in piglets as soon as possible after birth is crucial for optimal lifetime growth performance because a significant determinant of the health and performance of animals is microbial colonisation of the gut in early life. Indeed, several research studies have demonstrated that positive links occur between the gut microbiota of the piglet or a change in the piglet gut microbiota and performance parameters. With the upcoming EU ban on ZnO, novel feeding strategies that both support gut health and development and control or mitigate PWD in young pigs are gaining considerable attention.

Alltech's Seed, Feed, Weed (SFW) programme is one such feeding strategy that is designed to modify the gut microbial population, establish more diverse and favourable microbial populations as soon as possible after birth. At Alltech, we work closely with pig producers to implement the SFW concept to give new-born piglets the best start in life by:

·  Promoting favourable microbial communities in the gut, which will positively impact the growth and health of pigs later.

The SFW programme incorporates natural feed materials, such as Actigen, that are demonstrated to help maintain a healthy gut and support the normalising of gut microflora in both sows and piglets. Results from recent studies focusing on improving gut health in piglets demonstrated that the SFW program can reduce the attachment and adhesion of pathogenic bacteria, such as E. coli and Salmonella, to the intestinal cells of pigs. Furthermore, the reduction of bacterial attachment to the intestinal lining resulting from the SFW programme can immediately reduce inflammatory markers for infection. Numerous research studies show an improvement in the gut structure of piglets, followed by an improvement in daily gain and feed efficiency, resulting from Actigen supplementation in pre- and post-weaning diets. The SFW programme can form an important part of the solution when moving towards ZnO-free piglet production by firmly establishing a healthy gut with a reduced pathogen load, improved gut morphology and a diverse and favourable microbial population.

Until recently, ZnO in piglet feeds has been regarded as a vital nutritional strategy for preventing and controlling pathogenic infections and reducing the incidence of post-weaning diarrhoea in newly weaned piglets. However, as of June 2022, this practice will no longer be permitted in the EU, owing to developing environmental concerns and the spread of antimicrobial resistance resulting from the widespread and sustained use of ZnO at pharmacological levels. Pig producers in the EU must now re-evaluate how they rear healthy piglets and achieve optimal growth performance without ZnO. The key to accomplishing ZnO-free piglet production is to develop and implement a holistic strategy that incorporates optimal nutrition, management, health and welfare practices. The Alltech SFW programme will also be an important part of the puzzle for a suitable alternative to ZnO by positively influencing the gut health of both the sow and her offspring and ensuring that piglets get off to a healthy start as soon as possible after birth.

Start the conversation about how you can begin transitioning to ZnO-free piglet production by contacting the Alltech Gut Health Management team today at guthealth@alltech.com

Article made possible through the contribution of Dr. Hazel Rooney and Alltech Ireland