Ecuadorian shrimp feed supplier Alimentsa, now officially part of BioMar, a Danish aquaculture feed maker, recently celebrated its 30th anniversary in an event attended by more than 400 customers and stakeholders from the industry including the Vice Minister of Aquaculture in Ecuador.

Arriving guests were led through a tunnel where a wall-to-wall video showed the development of Alimentsa from start-up in a virgin industry to a leading feed supplier in the shrimp sector in Ecuador. At the main venue the stories became tied together representing the shared dedication to shrimp farming in Latin America and the synergies expected to be derived from the acquisition.

The formal dinner featured speeches from the Vice Minister of Aquaculture in Ecuador, as well as Carlos Diaz, CEO BioMar Group; Alex Olsen, ex-president of Alimentsa; and Danny Velez, general manager, Alimentsa. The speakers set the scene for networking and talked about innovation initiatives within aquaculture.

The state-of-art Aquaculture Technology Centre to be built in Ecuador in 2018 was one of the big topics of discussion.

"We strived to make sure all customers and stakeholders could use this evening to get a solid understanding of how our recent acquisition of Alimentsa will benefit shrimp farmers in Ecuador through access to new products and development opportunities. We will be able to strengthen the local agility through access to global resources within innovation", Diaz said.

The event was also graced by the presence of BioMar experts including the global hatchery manager, shrimp specialists, the technical director for Central Americas and the managing director of BioMar Costa Rica.

"It has been an amazing evening. I am excited by the enthusiasm from the customers when talking about the new partnership between Alimentsa and BioMar", said Alimentsa GM Velez. 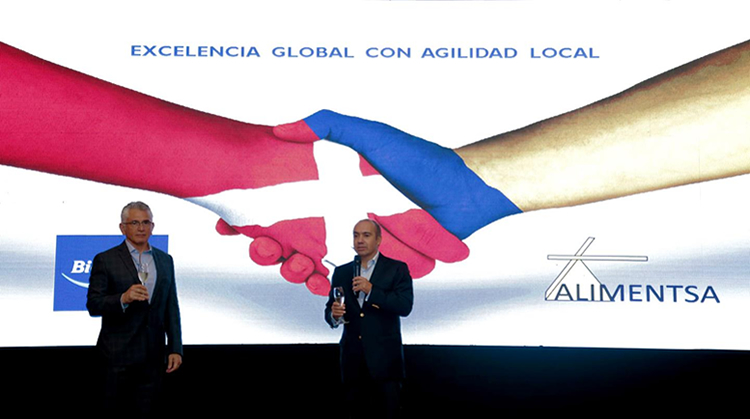 Multinational feed additives producer Nutriad announced the appointment of Dr. Ahmed Elmaazoun as sales manager for the Middle East. Nutriad is actively driving the introduction of feed additive solutions for aquaculture, as well as livestock, in the region via direct accounts and a distributor network.

Growing populations and incomes in the Middle East region have accelerated urbanisation and the development of a middle class. This in turn is leading to rising demand for food and evolving preferences for different and new foods.

Elmaazoun has been involved in the animal feed industry for more than 10 years. With a strong technical background and a broad network in the region, he will be responsible for key account management and support the Nutriad distribution partners in the region.

"I am delighted to join Nutriad and see great opportunities for the portfolio in the Middle East. The Nutriad additives address challenges producers face in relation to feed and food safety requirements as well as optimizing production. I will work to strengthen existing relationships and strive to grow Nutriad's market penetration in coming years", Elmaazoun said upon his appointment.

Nutriad CEO Erik Visser said Nutriad has been active in the Middle East for many years. "Even though the markets have been affected by political turmoil and economic challenges in recent years, we are committed to producers in the area and will continue to work alongside them to develop answers for today's and tomorrow's challenges", he added.

Nutriad delivers products and services to over 80 countries through a network of sales offices and distributors. These are supported by four application laboratories and five manufacturing facilities on three continents.

Calysta, the Centre for Process Innovation (CPI) and Otto Simon Ltd received the award for design, construction and successful launch of Calysta's new market introduction facility in Teesside. The plant uses Calysta's innovative gas-phase fermentation process to produce FeedKind® protein, a feed-quality protein for use in fish and livestock feed.

John McGagh, president of Institution of Chemical Engineers (IChemE), which grants the award, said: "IChemE's Team Award is important because it celebrates collaboration and diversity of thinking—something that is integral to robust, sustainable outcomes that benefit society".

"Calysta UK, the Centre for Process Innovation and Otto Simon have proved this through their winning project. They have delivered a plant with environmental and ecological impact at the forefront of the planning process, and delivered a facility which will ultimately tackle one of the biggest issues facing the population—food security", he added.

Graham Aylen, Calysta vice president, cited the "excellent" engineering collaboration from the project team. "Samples have been distributed worldwide for feeding trials, marking a significant step towards engineering a sustainable food source for the growing global population", he said.

Kris Wadrop, platform director in CPI said, "Structuring the project team and the execution programme to take us from a blank sheet of paper through the design stages to a detailed construction, commissioning and operational programme were critical in enabling such a complex fast-track project to be successful".

For his part, Peter Creer of Otto Simon said, "Otto Simon enjoyed a very effective collaboration with Calysta and CPI on the project, which was key to delivering this unique plant successfully and safely against a very tight deadline.

"It is rewarding to have been part of a project that has the potential to make such a major contribution to society, and we are delighted that our team's achievements have been recognized with such a prestigious award."

Calysta's manufacturing facility in Teesside is state-of-the-art, and last May, Calysta announced the successful production of the first four tonnes of FeedKind protein in the facility. To date, Calysta says the Teesside plant has produced over 10 tonnes.

FeedKind protein is a family of natural, sustainable and traceable feed ingredients for fish, livestock and pets. It is a non-animal source of protein approved for sale and use in the EU.

Shrimp fed a diet including FeedKind protein was found to have had equivalent or higher survival and growth when compared with shrimp fed a standard fishmeal-based diet.

The VNĐ800-billion (US$35-million) facility, which started construction in 2015, comprises four production lines, which will provide 360,000 tonnes of products annually, or one-third of fish feed production capacity of the Mekong Delta region, according to a report by the Vietnam News Service.

The plant is expected to make a breakthrough for the development of the domestic tra fish industry, as well as create more local jobs and contribute to the economic growth of the region.

Neovia, a world leader in animal nutrition and health, has invested an aggregate of US$1.5 million in AquiNovo Ltd, an Israeli company that develops solutions to improve farmed fish development to meet the ever-growing demand for fish protein.

The partnership between the two companies aims to develop new technologies and meet aquaculture market expectations.

Aquaculture is a fast-growing market with increasing economic opportunities accompanying the increase in the world's population, particularly in Africa, Asia, and Latin America. Rising standards of living is estimated to result in a 60% increase in world production of animal proteins by 2040.

Considering that the aquaculture industry today needs sustainable solutions that provide higher yield but lower production costs and reduced exposure to risks associated with longer growth periods, Neovia has defined "intensive aquaculture" as one of its five global priority innovation fields, implementing a holistic approach in innovative solutions for aquaculture.

Similarly, AquiNovo's technology addresses this challenge by developing solutions to improve farmed fish development. The company offers a non-GMO, non-hormonal, easy-to-use solution to be incorporated into the fish feed, providing hatcheries and fish farms with shorter time to market and additional growth cycles within existing infrastructure.

"We believe that AquiNovo's technology will make a real difference for fish farmers worldwide. The combination of fish yield enhancement, with reduced exposure to risks associated with longer growth periods, will significantly contribute to risk management and revenues for fish farmers", said Dr. Nissim Chen, CEO of AquiNovo, a portfolio company of The Trendlines Group.

"Neovia's investment affirms their confidence in the company, its vision and its achievements to date. We're excited to work with Neovia on the development of innovative solutions for the aquaculture market".

Hubert de Roquefeuil, Neovia president, for his part, said, "Intensive aquaculture ranks among our five major innovation fields and we are very interested in collaborating with a recognised partner such as AquiNovo. Our strong position in the international aquaculture market, especially in tilapia, will deeply benefit from this differentiating and innovative technology".