Last month, Cherkizovo Group hosted a new educational workshop which was attended by media and bloggers. 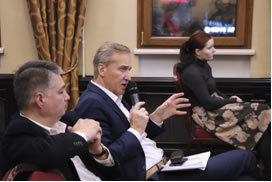 Jafarova spoke about current consumer sentiment in Russia. According to her, the frequency of meat purchases this June was down 1.8% year-on-year on the back of a 6% average price increase.

However, meat and poultry products boast a growth in both average check and sales by value –3.5% and 1.4% respectively.

As observed by GfK, consumers are getting increasingly interested in value-added purchases. During the same period, packaged manufactured meat and poultry products represented the only category with a growth in volume terms (7.3%). GfK does not think that promotions were the only driver for this trend.

"Consumers prefer to pay a little more to save time when buying (without waiting in line for products sold by weight) and cooking food," Jafarova said.

The workshop discussions centered around fake news about meat and the meat industry allegedly circulated by media.

Yushin claimed that the media is eager to rely on wrong and unfounded allegations made by various 'pseudo-experts' smattering on "harmful" meat.

"This false information may adversely affect investments and employment in the industry, as well as have other serious implications," said Yushin. He added that when reporting on quality and safety, the media should have more trust in Rosselkhoznadzor and Rospotrebnadzor whose data are evidenced by testing hundreds of thousands of meat product samples. The agencies demonstrate that the percentage of samples failing standards (for example, in terms of microbiology or labeling) ranges from 0.6% to less than 4%.

Davleyev recommended that responsible meat producers should combat fake news and open their doors for media and bloggers to see the production processes and technologies. He also urged journalists to rely only on comments made by reputable industry experts and contact them to check any information on consumer properties of meat.

"Unfortunately, journalists are not particularly interested in the benefits of meat, but eagerly consume all kinds of horror stories about it," said Semenova. According to the deputy director for research, meat is exceptionally beneficial for all age groups.

She cited medical opinions voiced at the International Congress of Meat Science and Technology two years ago, which suggest that consuming processed meat helps to prevent heart disease in older people.

Shapovolov believes that in the next 50 years, pork, poultry and cattle meat will remain the main source of protein for humans. "Meat is critical for the intellectual, reproductive and social development of the nation and the entire human civilisation," he said.

Dalnov addressed the ongoing attempts to replace meat in the human diet with cheaper products. Efforts to promote plant-based products as healthier alternatives to meat date back to early 1900s when a Crisco margarine was first introduced in the US.

"But in the mid-1990s. it was discovered that there are detrimental health effects associated with the consumption of margarine. The finding caused the FDA to declare that margarine containing trans fats was no longer safe to consume," Dalnov said.

Another assertion targets the meat industry in general, suggesting that methane produced by cows destroys the Earth's ozone layer, contributing to global warming.

However, the environmental impact of agriculture is negligible compared to that of the transport and power industries, according to Cherkizovo.