The supervisory board of Royal DSM has announced the upcoming succession of CEO Feike Sijbesma, who will hand over his responsibilities to his managing board colleagues Geraldine Matchett and Dimitri de Vreeze as co-CEO's in February 2020 and will support a smooth transition until May 2020. 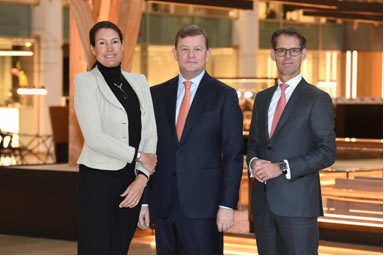 Geraldine Matchett, Feike Sijbesma and Dimitri de Vreeze of the DSM managing board.

After 20 years on the managing board and almost 13 years as CEO, Sijbesma has decided to step down as CEO and hand over the company's leadership, as he seeks to pursue other business and personal roles.

Sijbesma will formally hand over his responsibilities as CEO on February 15, 2020 to successors Matchett and de Vreeze, and will remain employed by DSM securing a further smooth transition in the coming five months, until May 1, 2020. Sijbesma will announce his new engagements and roles later.

Under the leadership of Sijbesma, DSM has gone through a significant transformation, from bulk chemicals company into one which focuses on nutrition, health and sustainable living, generating total shareholders return of about 400%. Over more than a decade DSM has significantly expanded its nutrition business, divested its non-core bulk chemical activities, and upgraded the materials portfolio.

In addition to focusing on business performance and financial discipline, under Sijbesma's leadership, DSM repositioned itself into the successful science-based company that it is today: purpose-led and performance-driven, putting innovation and sustainability at the heart of the company and its strategy.

"It has been a huge privilege to serve DSM for such a long time. I am deeply grateful to our board, all my DSM colleagues and business partners for working closely together and for their enormous commitment and contribution," Sijbesma said.

"I also thank our customers and shareholders for their trust and loyalty. And last, but not least, I am humbled for having been given the opportunity to serve society by creating value on three dimensions simultaneously: people, planet and profit. I will announce new engagements at a later moment and remain passionate driving solutions on global topics. I am proud that the supervisory board has chosen my managing board colleagues Geraldine and Dimitri, as my successors. Their appointment is well deserved and reflects the collaborative nature of our business, and I wish them every success for the future."

"We are very grateful for Feike's tremendous contribution to DSM during his 32-year career at the company and most specifically his last 13 years as CEO," said Rob Routs, DSM chairman of its supervisory board.

"Under Feike's visionary leadership, DSM transformed itself into a healthy, high performing, sustainable and innovative company. Feike has demonstrated that a company can deliver financial and sustainability returns while creating value and purpose for all stakeholders. We all wish Feike the very best for his future."

After a thorough process and external benchmarking, including the advice and input from an international search firm, the supervisory board has decided to appoint both Matchett and de Vreeze, the two managing board colleagues of Sijbesma, in a dual leadership as co-CEOs.

Together, they will maintain the focus on business performance, financial discipline, innovation, sustainability and people, as DSM continues its journey. This dual leadership structure is rooted in the long history of collaboration between them, which has been keenly observed by the supervisory board and is expected to create a strong basis for continued profitable growth. In conjunction with their co-CEO role, Matchett will retain her responsibilities as CFO while de Vreeze will hold the COO responsibilities.

As co-CEOs, Matchett will focus on financial management and capital markets communication, capital allocation, talent and culture development, as well as digital strategy and new ways of working. De Vreeze will focus on operational delivery, customer centricity, and driving growth and efficiency as well as innovation and R&D programmes. Jointly, they will be accountable for the performance of the company and will drive the purpose-led, performance-driven strategy and M&A agenda.

Matchett and de Vreeze have both demonstrated strong leadership while working with Sijbesma in shaping the company over the years. Their skillsets are highly complementary, and their combined leadership will enable them to leverage their respective strengths within DSM's collaborative environment, the company said.

To facilitate a smooth transfer and continuity to the new co-CEO leadership structure, the supervisory board will ask the shareholders at an AGM in May 2020 to reappoint chairman Routs for a final two-year term.