Loading ...
Home
Home
November 25, 2019
Hard times, sustainability and a new top shrimp exporter?
Is India's reign as the top shrimp exporter coming to an end? With more untapped resources than any Asian supplier, Ecuador's electrification of remote rural areas is being leveraged into state of the art investments in feed, online farm management and monitoring systems.
By Eric J. Brooks
An eFeddlink Hot Topic

It has not been an easy year for the shrimp industry. The Global Aquaculture Alliance (GOAL) estimates that after enjoying 11% growth in 2018 to slightly over 4.6 million tonnes, 2019 will see an immaterial 1% rise in farmed shrimp output to no more than 4.7 million tonnes. Nor is stagnant production being offset by higher revenues.
Shrimp growers entered early 2019 with the lowest prices since 2015, 10% below their 2018 peak, 20% below their mid-2017 level (when the current downturn began) and 38% below their 2014 all-time high. Staying flat at that low level through H1 2019, many Indian and Southeast Asian growers cut back their production until the Q3 2019, when production cutbacks rallied prices 14%, to their highest levels since their mid-2017 peak.

As the attached price chart shows, the bigger problem is that for 20 years, real (inflation adjusted) prices have fallen steadily; by 30% for larger sizes and up to 45% for smaller shrimp. Strangely, the trend defies conventional market assumptions as output continues to increase despite long-term price deflation. Steady, relentless deflation greatly favors new production zones with low unit costs while putting established shrimp exporters with disease issues and rising unit costs at a distinct disadvantage.
This is also why the status of top shrimp exporter keeps changing rapidly: From China in the early 2000s to Thailand ten years ago, followed by India and now apparently, Ecuador. Based on customs data, India's January to August Indian shrimp exports increased 3% on-year, totaling 430,000 tonnes, up 3% year-on-year.
On the other hand, Ecuador's January to September shrimp exports jumped 26% over 2018 levels, totaling 472,000 tonnes. Even if Ecuador fails to overtake India as the top shrimp supplier in 2019, it appears only a matter of time before it will do so.
Sandro Coglitore, managing director of leading Ecuadorian shrimp grower Omarsa, anticipates a 20.8% rise in output. From 530,000 tonnes in 2018, Ecuador's 2019 shrimp production is expected to total 640,000 metric tons –but industry observers expect Indian output to be up to 10% below this level.
In financial terms, older producers are trapped between historically low prices on one side and unit costs inflated by pathogen control expenses and disease mortality on the other side. No place is feeling this cost and production constraint more than shrimp farming's geographic homeland.
At the 2019 Infofish World Shrimp Conference held this November in Bangkok, Thailand, Robins P. McIntosh, executive vice president at Charoen Pokphand Foods noted that from 2009 through 2018 inclusive, Asian shrimp output rose a nominal 7%, with sharply lower Chinese, Thai and Malaysian output counterbalanced by rising Indian, Indonesian and Vietnamese production.
On the other hand, led by Ecuador, Central and South American farmed shrimp output surged 108% over this same time. McIntosh concluded that "In the last 10 years, growth has shifted to the Americas."
2019 turned out to be a continuation of this long-running trend. On one hand, the FAO reports "Vannamei production declined considerably in Asia as low prices persisted in the international market." Alongside 20% to 50% less pond seeding in major Indian production regions "Lower sales of seed and shrimp feed were also reported in China, Viet Nam, Indonesia, Thailand and Malaysia, indicating a smaller than projected production during the first half of 2019."
From a record 705,000 tonnes in 2017 and 650,000 tonnes last year, India is expected to raise less than 600,000 tonnes of shrimp in 2019, with some industry observers forecasting as low as 570,000 tonnes. 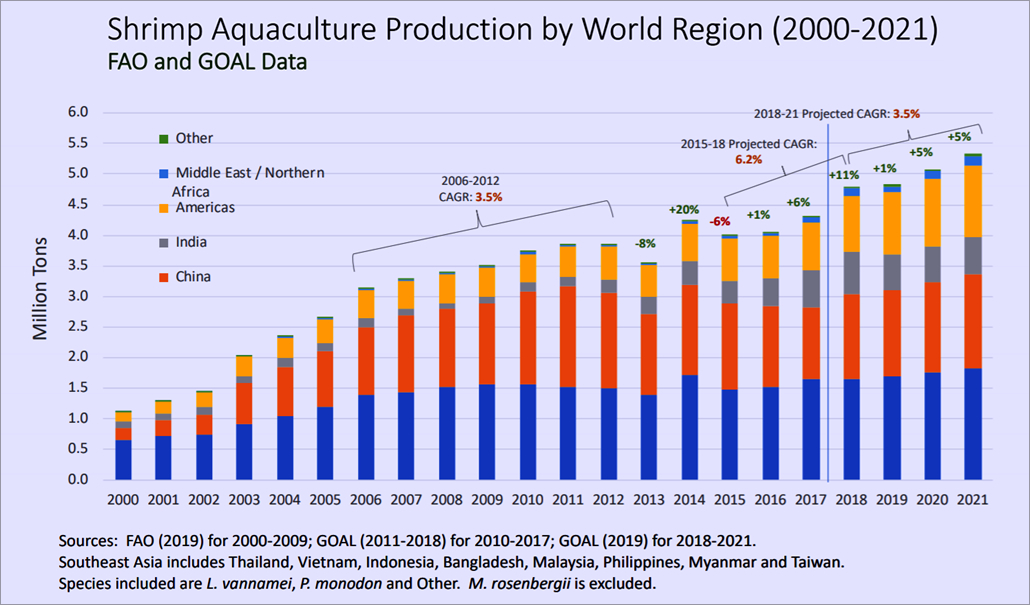 By comparison, while India counterbalances stagnant East Asian production, there's more to Americas than Ecuador's monolithic 640,000-tonne output and 630,000 tonnes of exports: A handful of neighboring countries including Panama, Mexico, Honduras, Nicaragua and Panama farm anywhere from 30,000 to 150,000 tonnes annually and are enjoying rapid output growth. From just 480,000 tonnes in 2012, Central and South American expanded shrimp output at a 13% annual rate that will total a million tonnes for the first time in 2019.
Even though shrimp pond yields average less than 2.7 tonnes/hectare in the Americas and 20 tonnes/hectare in Southeast Asian nations like Thailand, Ecuador has also increasingly relied on technology to boost output –but has the scope to leverage output much higher.
According to Biomar R&D director for Ecuador Laurence Massaut, Ecuadorian production is an increasingly capital-intensive venture led by the top 10% of shrimp growers. In a country that achieved leading exporter status with minimal technology, she cited five ways that capital investments enabled leading-edge Ecuadorian growers to sustainably double their stocking densities –without using antibiotics.
First, while electrification made it possible to introduce aeration to ponds, at this point there is only one aerator per hectare and "that's really not much." Multiplying the use of aeration on its own can significantly boost shrimp pond carrying capacity in the Americas in a sustainable manner.
Second, it enables the integration of state-of-the-art larvae nursery management systems. She stated that "Covered raceway systems in smaller nursery ponds are now being used more widely. The goal is to grow to a minimum of 0.5g and then stock. This can reduce mortality, blind feeding after stocking, and increase the number of [production] cycles per year." 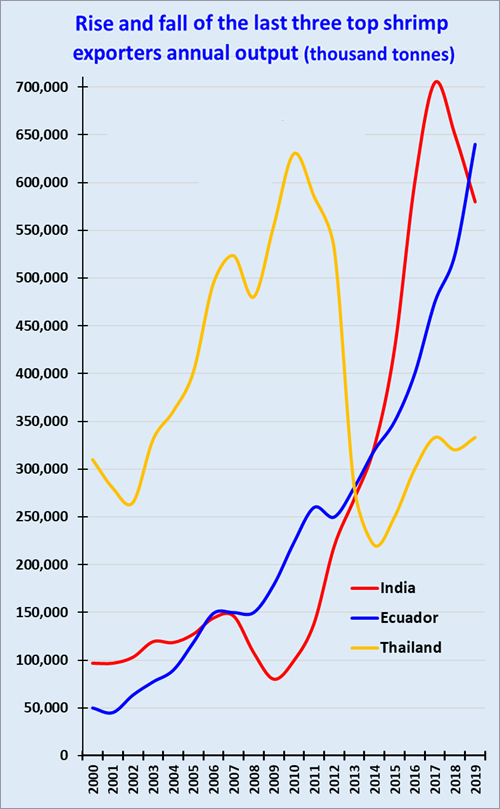 Third, investments in local shrimp feed milling facilities by leading suppliers including BioMar, Cargill and Skretting provide Ecuadorian shrimp growers access to higher quality feed while raising their awareness of its role in shrimp performance. Massaut adds that "According to those in the industry, the feed is better than before. There is also more consideration of feed formulations to improve shrimp health." –and this is in stark contrast to the situation in Asia, where McIntosh and other stakeholders have repeatedly pointed out the role poor feed quality plays in disease outbreaks.
Fourth and coincident with pond electrification and improving feed quality, Massaut says automatic feeders "are the biggest revolution". She explains that they "Completely changed the way we understand how shrimp are fed. For a long time, we were under-feeding, starving the shrimp basically." By fine-tuning feed to the shrimp growth cycle and minimizing wasted food "Automatic feeding has allowed us to extend feeding time and improve a lot the [pond] carrying capacity."
Fifth, technology is integrating the above technologies and numerous water quality measures into real-time, responsive pond monitoring, management, feeding and control systems.
According to Massaut, the trend is "To use automatic feeders with other types of technology; temperature probes, oxygen probes, water probes; even a microphone that tells you when shrimp are eating or not eating. This can be linked up to software on your computer or on your cell phone." Consequently, a technician monitoring a shrimp pond wirelessly from kilometers away can have a better understanding of its condition, productivity and emerging issues than an offline technician standing next to the pond.
By leveraging in these technologies, the top 10% Ecuadorian shrimp farms have successfully achieved stocking densities of now stock 20/m2 to 25/m2 post larvae and harvest 2.5 tonnes 4.0 tonnes per hectare per growth cycle –while 'squeezing in' in three harvests per year.
This compares with average Ecuadorian farms, which have stocking densities of 12/m2 to 15/m2, and harvest 1.1 tonnes to 1.3 tonnes harvest per hectare in each of just two harvests per year.
Consequently, an Ecuadorian farm investing in these new techniques can harvest 7.5 to 12.0 tonnes of shrimp per hectare annually, compared to a conventional shrimp pond's 2.2 to 2.6 tonnes per hectare.
On one hand, this is still far below the 20 tonnes per hectare that Thai farms harvest. On the other hand, when multiplied by its untapped coastline, it represents a quantum leap in Ecuador's –and the Americas– longterm export competitiveness. Should Ecuador successfully leverage another technology or two, it might even catch up to the productivity levels Thailand uses to make up for its smaller endowment of water resources.
Ecuador's "luck" will not last forever any more than China, Thailand or India's reign as top exporter did. Just like its more densely populated competitors, it too faces incremental declines in water quality caused by human pollution and long-term pond use. It too could one day hit a wall beyond which it finds it cannot achieve yesteryear's stocking densities, much less transcend them.
For now, however, Ecuador has learned to use technology that can boost annual pond productivity by 362% --and it has yet to be rolled out to over 80% of the nation's shrimp farms—or to shrimp farms in other rapidly developing Central American nations. It implies that so long as Ecuador continues to leverage shrimp growing technology in a sustainable manner, its reign as the shrimp exporting power may be a long one.