November 15, 2018
The USDA trashes its China corn statistics and life goes on - or does it?
China's corn inventory instantly triples, world corn supplies jump 76% --but with Beijing's stockpile walled off from the global trading system, the market barely moves. The huge statistical revision raises serious questions about China's coarse grain imports, longterm market cycles and even their own accuracy.
By Eric J. Brooks
An eFeedLink hot Topic 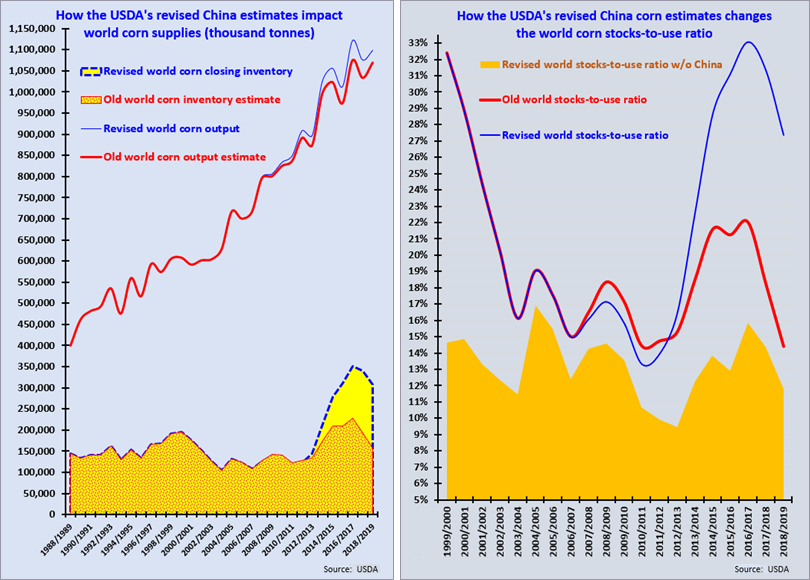 While November 2018's USDA WASDE report had a lackluster on the daily corn trade, its huge revisions of Chinese corn harvest, consumption and inventory statistics are loaded with long-term implications -both for China and the world corn market too.
The size, suddenness and inherent contradictions within the revised numbers cast a degree of doubt on their overall accuracy (see box article below). Nevertheless, by choosing to conform to a sudden, unexplained revision in China's own monthly agricultural statistics, the USDA profoundly changed world corn supply/demand fundamentals. While it has no impact on short-term prices, the USDA cannot overturn ten years of statistics from the world's second largest corn producer without altering long-term market forecasts –and calling its credibility for providing reliable grain market numbers into question.
On one hand, China's corn consumption remains largely unchanged, with downward revisions to late 20th century feed corn use mostly canceling out higher estimates of post-2010 consumption. Hence, a net 8.8 million tonnes less consumption over 30 years averages out to only 29,000 tonnes less demand per year over three decades. -That is an immaterial sum in a market which consumes 276 million tonnes of corn annually.
On the other hand, the revised consumption statistics have one credible implication: The years since 2015 have seen a rapidly growing, 14 million tonne gap between previous annual Chinese corn consumption estimates and actual demand. That is neither surprising nor controversial: Both the post-2015 gradual liberalization of China's corn market (via lower prices) and more recent ramping up of ethanol production is causing its long-term corn demand growth to accelerate.

Can this massive revision of Chinese corn supply statistics even to be trusted? For several years running, officials from China's China National Grain and Oils Information Center (CNGOIC) stated at industry conferences that China substituted imports of coarse grains such as sorghum, DDGS, oats and feed wheat to avoid buying foreign corn. Now, the same agency suddenly claims that China had considerably more corn than it needs.
This leads to the following dilemma: According to the revised statistics announced by CNGOIC (and adopted by the USDA), China's corn harvest surplus (harvest minus consumption) skyrocketed from 8.1 million tonnes in 2008-09 to 43.8 million tonnes in 2014-15. If this is true, then why did coarse grain imports skyrocket from a little over 2 million tonnes in 2009 to approximately 16 million tonnes in 2014 –in a year when China allegedly harvested 39.5 million tonnes more corn than it needed for feeding its livestock?
Under the revised statistics, China's imports of sorghum and oats used in feed increased by a factor of 24 even as its corn surplus supposedly grew by leaps and bounds.
This of course, does not mean that the previous statistical estimates were more accurate. It could mean that the new figures overestimate Chinese corn supplies as much as the old statistical series underestimated them. At the very least, the new numbers appear to contradict the statements of CNGOIC representatives, who stated at conferences that China was substituting coarse grain imports in place of corn.
Whatever the actual volume of China's corn supply, the truth will come out via the behavior of its grain traders in the open market. Watch closely in coming months if China's coarse grain purchases (or lack thereof) are in agreement with such an official abundance of corn.
All rights reserved. No part of the report may be reproduced without permission from eFeedLink.