While corn prices have stayed at historically levels near US$7.50/bushel, eFeedLink reports that October saw China's cash corn prices fall sharply. Dropping by 5.2% on average, many producing regions saw prices fall by anywhere from 6.6% to 10.9%. Only Dalian futures, with their connections to international corn prices, dropped by an immaterial, nominal amount.
China's corn import dependent south, saw prices drop by least amount, 3.2%. That was because the inflow of foreign imports staying at near recent CBOT highs, there was less room for deflation.
The fact this price Chinese corn price deflation is feed-based can be seen by looking at the price behavior of industrial corn by-products: Corn starch, which is most likely to be consumed by humans, fell by just 3%. On the other hand, corn fibre and DDGS, which are almost exclusively used by the feed and livestock sector, fell by 8.1% and 9.9% respectively â€“something that could be telling us that China's livestock production is about to turn downwards.
It is too early to call it a bumper harvest but the sharp drop in domestic Chinese prices raise this possibility.
That in turn would imply that when the post-harvest supply bulge is over, China could import less corn than was expected. 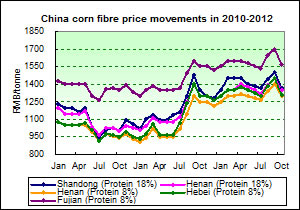 Mind you, at this point, there could be other factors impacting the demand for corn, including China's increasingly visible economic slowdown. But whether the price drop is due to a bountiful harvest, a sharp demand drop, or combination of the two, it needs to be watched.
Should the deflation or price flatness extend beyond too far beyond mid Autumn's harvest time supply bulge, it would imply that China might be importing several million tonnes less corn than was expected. Together with the disappointing corn import volumes recently chalked up by East Asian nations such as Japan and South Korea, that could soften up corn prices early next year.
Any such price softening would be limited by the increasingly tight supply situation for wheat, as Australia is now on route to its lowest wheat export volume since 1986. Coming on the heels of a string of disappointing harvests in Russia, America and the EU, Australia's paltry export performance follows on news that dry soil will make for a poor US winter wheat harvest.
All this has gamed corn to increasingly take wheat's place in feed rations. That on its own should keep corn over US$6/bushel. Nevertheless led by China's corn market deflation and poor US corn export performance, we may see corn demand drop more in line with the constricted supply base. If China's corn market stays soft, CBOT prices may end up being impacted in a downward direction.