USMEF delegation explores opportunities for US pork in Colombia

The US Meat Export Federation (USMEF) recently led a group of producers and other pork industry leaders on visits to Bogota and Medellin, Colombia, the organisation said in late October.

The trip was purposed to explore factors that made Colombia the second-largest growth market for US pork exports last year, as well as seeking opportunities to continue building momentum.

Funding for the Colombia Trade Mission, which included business meetings with importers, pork processing plant tours and visits to retail meat outlets, was provided by the National Pork Board (NPB). Seminars conducted by USMEF in each city were funded by the USDA Agricultural Trade Promotion Program (ATP). 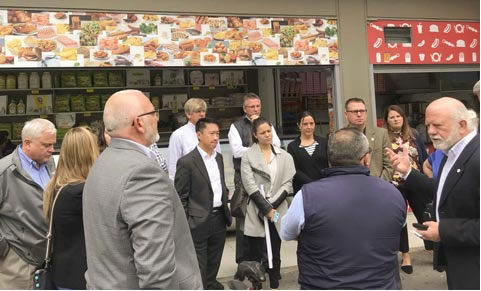 A USMEF delegation learns about the tastes and preferences of Colombian consumers during a visit to a foodservice business that serves pork brisket bones.

US producers took the opportunity to engage both current and prospective Colombian customers, distributors and traders and in-country USDA officials. Those attending the USMEF seminar in Bogota heard global pork production and trade updates, received a review of US efforts to prevent African swine fever (ASF) and got to see how the U.S. industry approaches sustainability.

The topics were also covered at the Medellin seminar, supplemented by NPB presentations on its pork quality assurance programmes and a US pork cutting demonstration. Colombians were also given a chance to tour a US hog farm through a virtual reality video system – a new tool designed to connect international customers to US agriculture by sharing a detailed look at US pork production.

The virtual tour supplemented face-to-face discussions about the value and attributes of US pork.

"We build many relationships when we go on these trade missions and those relationships often develop into business for our industry today and into the future," said pork producer Glenn Stolt, president and CEO of Christensen Farms.

"Being present in a market like Colombia allows you to see not only the good work being done by organisations like USMEF, it shows you how our customers perceive US pork and our industry. It allows us see in person what sets us apart from the competition and hear from the people making decisions about the products they buy."

Last year, Colombia trailed only South Korea as the largest growth market for US pork exports. So far in 2019, China is by far the growth leader but exports to Colombia have continued to increase. The United States is the leading pork supplier to Colombia, capturing more than 90% of the imported pork market.

She noted that in 2018 Colombia's per capita pork consumption was 16.9 pounds of product weight, an increase of 11.6 pounds since 2008. Still, Colombia's consumption is well below other Latin American countries such as Chile (38.1 pounds) and Panama at (28.4 pounds).

"For the buyers in Colombia, this trade mission highlighted what the US is doing to provide a really good product, along with the demand-building activities USMEF is conducting in the market," said Jessica Julca, USMEF representative in South America, who teamed with Spreitzer to present a briefing on USMEF's work in the market.

"At the same time, it was important to get some of our US pork producers to Colombia to really see the opportunities that exist for US pork."

While most US pork exported to Colombia is used for further processing, there has been a recent shift toward demand for retail cuts such as boneless sirloins, the USMEF said. The cutting demonstration held for 60 importers at the Medellin seminar provided insight into cuts that could be popular in the market.

"As producers, we are trying to drive our market price and we want potential customers to recognise that we have a safe and consistent product they can rely on - that's the message we shared in Colombia," said Randy Spronk, a pork producer from Minnesota who chairs the USMEF Pork and Allied Industries Committee.

"For me, it's an excellent chance to see how my checkoff funds are being utilised in foreign markets to increase value back to me on my farm."

One of three NPB staff members on the trade mission, Norman Bessac, vice president for international marketing, said the trip to Colombia provided a glimpse of the potential for further export growth.

"An example was the cutting demonstration, where we looked at the cutout items and shared with importers ideas and ways to get the most value out of each item," he said. "That's an impactful way to promote your product and earn new customers."

"Colombia been a solid market for a number of years, but now, especially on the pork side, it's really heating up with a lot more activity and a lot of potential," said Don Mason, USMEF representative in Colombia.

"This summer, at USMEF's Latin American Product Showcase, we had a lot of Colombian importers participate and they all said that they were looking for new ways to utilise pork products. That's exciting, because it shows they are expanding their horizons. The US team got a close look at that while they were here."

"For me, it was a perfect mix of seeing what consumers in Colombia are looking for and where the opportunities are today and where they will be tomorrow," said Jack Shao, international sales and marketing manager for Hormel Foods.

"We saw Bogota, a metropolitan area of more than 10 million people, and Medellin, a city of 2.5 million. We had great discussions with hotels, restaurants and retailers to learn what kind of products they are looking for and how they use pork products."

Other highlights from the trade mission included a session with Casey Bean, agricultural counselor for the USDA Foreign Agricultural Service in Colombia. He addressed the group on trade opportunities and challenges in the market and pointed to Colombia's growing middle class in the country as a major factor driving import growth.

The US team toured Frigorifico Guadelupe, a pork and beef plant and wholesale market in Bogota that slaughters hogs and cattle and produces processed products like chorizo. In Medellin, the team toured the Alimentos Carnicos plant.

John Hinners, USMEF vice president for industry relations, said 88% of the pork raw materials used by Alimentos is imported from the US.

"Alimentos has 71% market share for cold cut processed meats sold in Colombia," said Hinners. "We had a very good meeting with them and learned they aim to boost their sales by offering consumers a variety of foods, including more options for meat products."