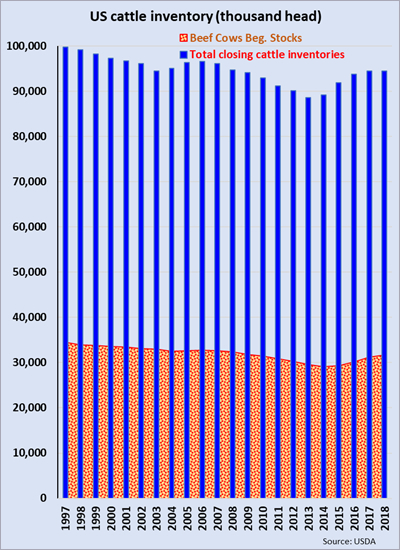 It's been a good year to be a US beef cattle farmer. Several years of cattle inventory rebuilding momentum are resulting in fast beef production growth -just in time for America's economy to boom and export demand to take off.
Drought earlier this decade limited supplies but a recovery in US cattle numbers has made for an ongoing rebound in US beef output and exports. Since making a secular bottom at 88.526 million head in 2013, closing inventories of all cattle types have recovered 6.7% and are expected to total 94.50 million head by the end of this year, their highest level since 2008.
Driven by historically high cattle prices in the mid-2000s and strong beef export prices over the past two years, beef cattle staged an even stronger recovery. They opened 2018 up 1.6% to 31.723 million head, from 31.213 million in 2017. It is also a 9.1% increase from their 2014 low of 29.085 million head. The cattle inventory rebound's impact on beef production has been augmented by carcass yields and finishing weights, both of which continue to trend upwards.
Impressive as this inventory rebuilding cycle has been, cattle rearing returns have peaked and dry conditions returned to America's southern plains. Hence, total cattle numbers are poised to peak near 95 million head and beef cattle just below 32 million head respectively over the next year.
Aware that both nature and market prices may be less favorable next year, slaughter rates are rising and were nearly 10% ahead of last year's pace in H1 2018. A projected 4.2% increase in 2018 slaughter numbers follows a 5.2% increase in 2017. Anxious to maximize their returns before the market cycle turns, farmers are pushing finished cattle to their highest weights possible. Amid arid pasture conditions, a high proportion were put on feed to maximize finishing weight and returns.
As a result, after rising 3.7% (to 11.938 million tonnes) in 2017, beef production will increase another 5.6% this year, to 12.602 million tonnes. While the Trump administration's near 4% annual rate of economic growth is doing wonders for red meat consumption, the production increase dovetails with strong increases in East Asian demand. 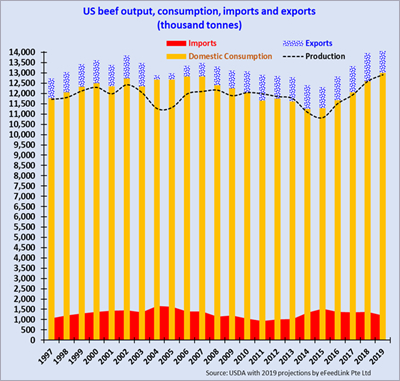 Exports are on track to rise a USDA estimated 5.7%, from last year's record 1.298 million tonnes to 1.372 million tonnes this year. There is, however, reason to believe this forecast will be exceeded.
Led by higher shipments to wealthy northeast Asia, H1 US beef exports rose 9%, to 662,875 tonnes, from 608,000 tonnes a year earlier. The value of H1 2018 beef exports increased by an even sharper 21% to US$4 billion, from US$3.31 billion in the same period of 2017. This makes 2018 the first year that over US$4 billion in beef export revenues were earned before August.
Moreover, preliminary USDA data implies that momentum is increasing. Three days prior to this article's publication, the USDA reported January to July exports totaled 779,450 tonnes and were 10% ahead of last year's volume for the same period of 2017. Much of this success is due to US beef's growing popularity in the northeast Asian countries of Japan, South Korea and (before the trade war disrupted matters) China.
With both South Korean and Japanese economies enjoying a sustained multi-year expansion their collective 2017 beef import volume increased 9.4% on the back of a 13.6% increase in Japanese buying and 3.5% rise in Korean purchases.
Supported by trendy new restaurant chains that sell inexpensive American steaks, beef exports to Japan increased by 18.9%, from 258,653 tonnes in 2016 to 307,559 tonne in 2017. While 2017 shipments to South Korea only increased by 2.7% (to 184,152 tonnes) in 2017.
Northeast Asian export momentum carried over into 2018, with South Korea taking over from Japan as the demand growth locomotive. Collective South Korean and Japanese H1 2018 beef import volume increased by 11%. Whereas Australian beef exports to Japan and South Korea increased 1%, January to July shipments of American beef jumped 20.5%. January to July shipments rose by 45% to South Korea (to 166,000 tonnes) and 7.5% to Japan (233,000 tonnes) respectively.
South Korea represents the most significant part of 2018's success story. The previous year saw the Trump administration renegotiate its existing free trade agreement with South Korea. The resulting lower tariff rates gave US beef an advantage over its Australian competition, leading to aggressive 2018 export growth.
While America remains the world's fourth-largest beef exporter, its overall trade performance is a victim of domestic prosperity: With America's own booming economy sustaining beef demand, imports are also staying stubbornly high. Indeed, America stands out as a wealthy country where rising incomes and strong economic growth keep red meat consumption growing by more than 2% annually.
At 12.59 million tonnes, consumption is up 4.5% from last year's 12.05 million tonnes and was revised upward from the 12.34 million tonnes initially projected for this year. Even though output is rising a faster 5.6% (to 12.60 million tonnes), the 100,000-tonne difference between beef consumption and production requires a near constant level of imports at a time when they would usually fall.
At 1.379 million tonnes, 2018 imports will be they marginally exceed imports and are 1.6% above last year's 1.358 million tonnes. It is also significantly above the 1.19 million tonne level that was projected less than a year ago.
But while imports are proportionate to America's economic health, exports are subject to politics and here the news is not entirely good. After opting out of the Trans Pacific Partnership (TPP), a new Comprehensive and Progressive Agreement for Trans-Pacific Partnership (CPTPP) was signed by 11 even nations. They include major beef importers like South Korea and Japan and exporters such as Australia and New Zealand -but not America.
Under the new CTPP, tariffs will fall steeply on Australian, New Zealand and Latin American beef. According to the US Meat Export Federation, that will put American beef at a significant export market price advantage by 2023.
Hence, while US beef is enjoying the intersection of peaking cattle numbers with favorable domestic and favorable demand conditions, under a worst-case scenario, deteriorating terms of trade could sink US beef's export prospects just as cattle numbers go into secular decline. Much depends on the strategy and foresight shown by US trade negotiators -and whether America will use its weighty political muscle to improve US beef's access to large East Asian markets.