Sanovo Technology Robotics: The next leader in robotics solutions

During the summer, both Sanovo and Gibotech made frequent visits to each other as they continued teamwork in developing a new robot cell for Sanovo's palletising facility. But a lot more has been at stake than just the robot cell, which was completed in just four weeks. 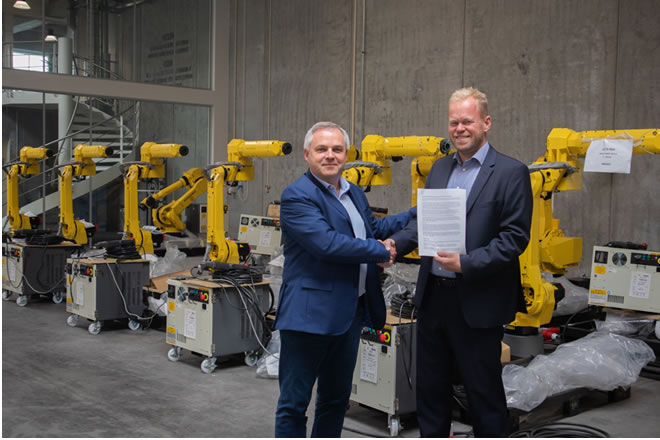 The two neighbours have seized the opportunityof being situated side by side in Odense, a location becoming rapidly known as Denmark's robot capitol and will soon add another robotics company.

Besides being a part of Thornico, a global conglomerate owned by the Stadil family, Sanovo Technology Group is one of the world's largest suppliers of machines and equipment for handling of eggs and egg products.

The new organisation will make Sanovo Technology Robotics the sole supplier of Sanovo Technology Group and the company will also develop automation and robotics solutions for the group's various business areas.

The main goal is simple: to become the world's leading supplier of robotics solutions for the egg industry.

"We are number one in the world within our field. Now we are expanding our position to also include automation with robots and AGV systems. We believe that cooperating with Gibotech, combined with our vast knowledge about the market and building complete process lines will make us stronger," Michael Midskov, CEO of Sanovo Technology Group.

The two companies have been searching for opportunities to partner up ever since Gibotech moved to Datavej in 2916.

Sanovo Technology Group has had ambitions to incorporate automation within the group's business areas and both companies see great advantages of the convenience of being situated side by side. Thus, Sanovo Technology Robotics will be housed under the same roof as Gibotech.

"It means a lot for both organisations that the new company will be based in the Gibotech headquarter, so the innovative and developing mindset which is the core of our business when developing robot cells, is also anchored in the new company," Henrik Anker, Gibotech's CEO, shared.

The creation of the new company will also help to create more employment opportunities in Odense.

As Sanovo Technology Robotics is an independent organisation, various competencies are needed. The company is already recruiting for project managers, technical designers, programmers and assembly workers.

"Expectedly, when a new company is created, there will be a need for more resources. Even though we began by shifting some employees at Gibotech and Sanovo into Sanovo Technology Robotics, we will still have to bring in new people. Hence, if anyone with the right expertise and is interested to be part of a new innovative company, please keep an eye on our website and updates posted on our social media sites," Anker urged.

Additionally, Anker will also be the CEO of Sanovo Technology Robotics.