Pathway Intermediates officially opened a new branch in Vietnam last June 29, some three years after the opening of its Thailand branch in 2016.

Pathway Vietnam will contribute to expanding its global business with new members Kevin Nguyen and Ms. Lily Le. Mr. Nguyen will lead Pathway Vietnam as the country manager and Ms. Le will give support as technical sales manager.

Mr. Nguyen is specialised in monogastric animal nutrition and has much experience in Vietnam's livestock industry. Ms. Le is a trained fish nutritionist and will support Pathway Vietnam to open up the aquaculture market in Vietnam.

By opening its Vietnam branch, Pathway Intermediates grows its presence in Southeast Asia and will deliver value-added solutions to more customers and excel in meeting their expectations.

After 20 years of experience in extrusion systems, Amandus Kahl has developed a new extruder product family in order to meet increasing requirements of the fast-growing fish feed, as well as pet food, market.

The new family comes with four different machine sizes covering the whole range of performance from lab-scale up to 10 t/h industrial large-scale applications. All machines are available as machine-only or as turnkey extrusion lines comprising all required process steps like milling and mixing, steam conditioning, extrusion, drying, coating, cooling and packing.

These features are complemented by highly effective fine-control measures like screw speed adjustment, steam/water addition to the extruder barrel, and individually controllable heating/cooling jackets–all adjustable during operation for direct product quality response. The combination of individually adjustable screw elements and the fine-control measures enables Amandus Kahl to satisfy its customers' requirements in the majority of cases. Complex and expensive additional equipment to influence expansion behaviour is not required, allowing customers to save investment as well as operational costs.

An operator-friendly machine was designed in mind: this is achieved by a double-hinge head connection, ensuring fast die changes and fast knife replacement. The frame-mounted touch screen-based operator panel complements the user-friendly design and gives access to all relevant operational data, settings and options during start-up and operation.

Extensive prototype testing at Amandus Kahl's test centre in Reinbek near Hamburg showed good results in terms of product quality, capacity and process stability for the production of sinking as well as floating fish feed.

The first-series machines are sold to countries in northern Africa, and commissioning is expected to be finished in early 2020.

KAHL fish feed plants are equipped with the latest process technology, the core of which is the extrusion system with the extruder OEE and the process control system E5EP. 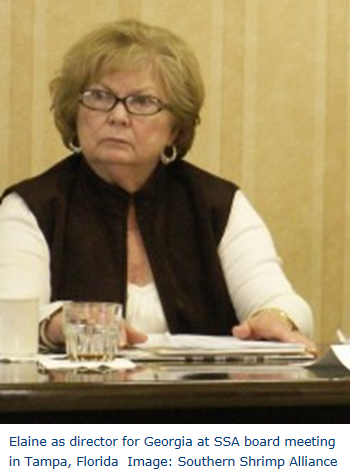 US shrimp industry mover Elaine Knight passes away at 78

Elaine Walker Knight, hailed as one of the pillars of the US shrimp industry, has passed away. She was 78.

Knight was a founding director of the Southern Shrimp Alliance (SSA) and also served two terms as its president. She died on July 15, the SSA announced.

"The shrimp industry has lost one of its most formidable and capable advocates with the untimely passing of Elaine Knight," said John Williams, SSA's executive director.

"Miss Elaine was a rock-solid pillar of our industry to whom we all owe a huge debt of appreciation and gratitude."

A native of Brunswick, Georgia, USA, Knight, together with her husband, Robert, was engaged in shrimp harvesting, processing and selling through their Knight's Seafood Inc. in Brunswick, Georgia. Brunswick is the centre of Georgia's shrimp industry.

TO START PRODUCTION BY MID-2020

A new feed mill in China's Beijing-Tianjin-Hebei economic zone broke grounds in late May, and is expected to begin producing aquaculture feed by mid-2020.

James Zhou, head of LDC's North Asia Region, noted that aquaculture represents an efficient and sustainable source of protein in China, and that demand is growing particularly for healthy meat alternatives.

Fermented soybean meal has become a popular alternative to fishmeal, with sustainability being one of the factors driving its popularity, along with economic factors such as price.

THANKS TO STRONGER FROZEN SEAFOOD BUSINESS

Seafood giant Thai Union Group PCL reported a 13.1% year-on-year rise in its second-quarter gross profit to 5.364 billion baht (US$174.424 million), thanks to stronger performances from the frozen seafood, as well as the value-added product and pet-care, business.

The strong gross profit resulted in a stronger EBITDA (earnings before interest, taxes, depreciation and amortisation) at 15.4% compared with the same period last year and an interim dividend of Bt0.25 per share.

Consolidated sales during the quarter declined 4.6% year-on-year to Bt32.2 billion ($1.048 billion) due to the Thai currency's appreciation, the depreciation of EU currencies and lower raw material prices.

"Profitability remains a key focus for us at Thai Union, and the overall performance in the second quarter was pleasing, particularly in a challenging operating environment," said Thiraphong Chansiri, CEO of Thai Union.

"As we look ahead, Thai Union will continue to see new innovative products developed and launched into market, which will provide us with new revenue streams as we work to build a business with sustainable growth."

Thai Union officially opened last June its new Global Innovation Centre in Bangkok, which employs more than 160 scientists and researchers from around the world.