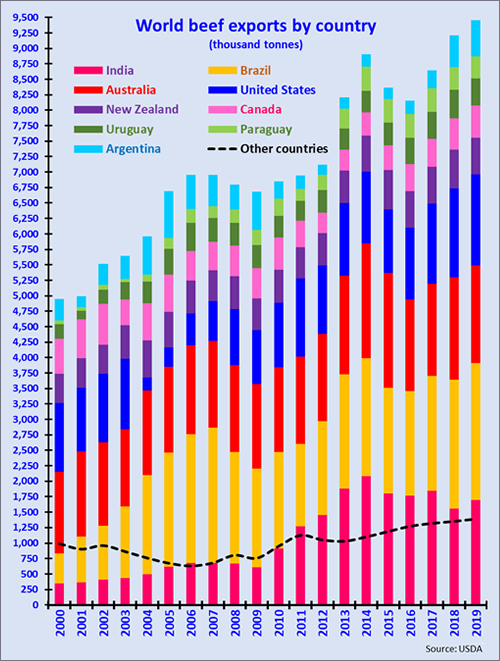 World beef demand has never been higher but neither man nor nature is allowing suppliers to take full advantage of the situation. Due to the political and meteorlogical misfortunes described below, America, Argentina, Australia and India all have 500,000 tonnes less beef available for export than would otherwise be the case. That's 2 million tonnes fewer beef exports in a world beef market of less than 11 million tonnes
After rising by 5.7% in 2017 and 5.9% in 2018, not even China's African Swine Fever epidemic can make world beef exports rise by much more than the USDA forecasted 2.7%, to a record 10.835 million tonnes.
But even this year's 2.7% increase is a welcome improvement over beef's long-run performance. From 2014 through the end of 2019 inclusive, beef exports increased at a rather anemic 1.5% annual rate.
While strong world beef consumption is growing strongly, nature and politics are determining how much beef can be supplied and who can supply it. While exporters will only supply 8.4% more beef in 2019 than in 2014, supplier rankings are changing far more quickly.
Within that 8.4% change, 682,000 tonnes of lost Indian (-382,000 tonnes, -18%), Australian (-276,000 tonnes, -16%) and Paraguayan beef (-24,000 tonnes, -6%) exports were offset by a cumulative  1.241 million tonne rise in shipments from Argentina (383,000 tonnes, +194%), America (+309,000,+27%), Brazil (301,000 tonnes,+16%), Canada (147,000 tonnes,+39%), Uruguay (90,000 tonnes,+26%) and New Zealand (+11,000 tonnes, +2%).
If Mexico and a handful of European nations hadn't boosted their collective exports by 278,000 tonnes over these five years, beef would be much more expensive than it currently is.
Two unvarying constants dominated all the above described supply-side changes: Politics and nature are transferring world beef market dominance from India and Australia to South America.
This is true despite an impressive revival of the once stagnant US beef cattle sector. In America's case, it entered the 2010s with a pastureland drought and closed the decade caught in a nasty trade war.
Following three flush years of 10% to 12% increases in export volumes, good pastureland weather and a large yet rapidly growing domestic market, the topping out of US beef's cattle rebuilding cycle is limiting this year's export increase to a still healthy 3.7%, totaling a record 1.476 million tonnes.
With cattle inventory growth leveling off, US beef output growth of 6.4% in 2016 and 3.8% in 2017 fell to 2.6% last year and only 1.5% this year. With lower cattle prices making profit margins thin, US beef's diminishing supply increase comes at the tail end of a five year inventory rebuilding cycle.
On one hand, post-2016 30% cattle price deflation means that in both 2018 and 2019, cattle inventories are poised to expand by less than 1% annually, compared to the 3% annual growth seen from 2015 through 2017. Over the short-term, this will slow down export growth from its near 10% pace of recent years to incremental increases.
On the other hand, provided the post-2015 recovery in pastureland moisture continues, American beef exporters only need cattle prices to recover to start a new inventory building cycle –but for this to happen the US government to do them a few favors.
Two years ago China finally allowed the importing of US beef. It started rapidly taking market share away from once-dominant Australia but the Trump administration's trade war got in the way. Last year, China was on its way to becoming US beef's fastest-growing export market when it was slapped with a 25% import duty –and it essentially blocks US beef world's largest fastest growing market for beef imports.
Similarly, the Trans Pacific Partnership (TPP) was going to reduce Japanese tariffs on US beef from the current 38.5% to 9.0%. Then America's government canceled the TPP just in time for Japan to sign a free trade agreement with Australia. This is unfortunate, as Japan is the biggest buyer of US beef by volume and even more so on a dollar value basis.
As a result, Japan recently cut import duties on Australian chilled beef to 29.3% and frozen beef to 26.9% respectively. By the early 2020s, Japan will tax Australian beef at 19.5%, half the current 38.5% tariff on US beef.
This is unfortunate, as the 331,000 tonnes of US beef shipped to Japan accounted for 23% of export volumes and Japanese buyers pay high prices and purchase the priciest cuts. Sadly, US beef impressively recovered from years of severe drought earlier this decade only to become a victim of trade war politics.