July 10, 2019
America's beef boom peaks at a murky trade cross-roads
Cattle herd restocking and export growth level out amid uncertain trade war outcomes.
By Eric J. Brooks
An eFeedLink Hot Topic
After several years of good returns and balanced growth, US beef cattle, beef production and trade are peaking amid much uncertainty. In the years after 2015, a booming US economy coincided with unexpectedly strong domestic beef demand and strong Asian beef import growth. 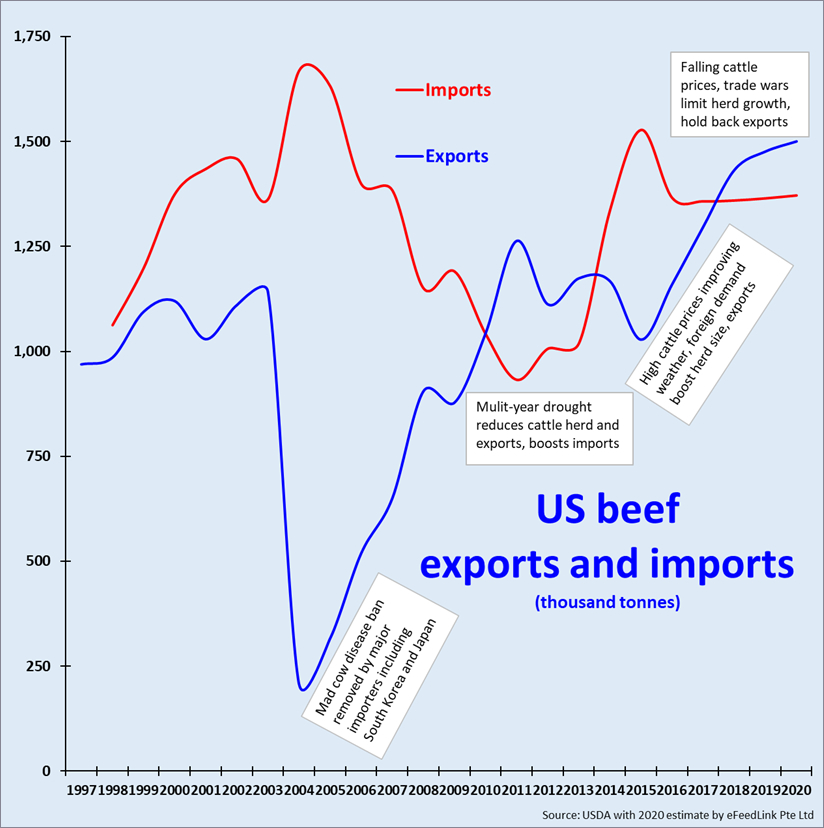 With domestic consumption growing only nominally, trade saved the day in 2018, with exports rising 10.4% to a new record of 1.432 million tonnes, from 1.297 million in 2017. Moreover, beef export value per head of fed cattle averaged  ofUS$320.72 in 2018. That is up 14% from US$280.70 in 2017 and breaks 2014's record US$300.00 per fed cattle.
Japan was US beef's largest foreign customer and boosted its 2018 import volume 18% on-year, to 330,000 tonnes. The trade performance was further augmented by free trade agreement powered 34% growth in shipments to South Korea, to 240,000 tonnes. It was complemented by a strong 33% increase in beef exports to Taiwan (to 59,694 tonnes) and a collective 22% rise in Southeast Asian shipments to Philippines (+31%, 12,222 tonnes), Vietnam (+23%, 12,083 tonnes) and Indonesia (+15%, 7,386 tonnes).
NAFTA trade partner Mexico recorded a 7% increase in 2018 beef shipments to 142,514 tonnes but is expected to see faster growth with the resolution of its trade dispute. Now however, US beef's formerly buoyant supply, demand and trade fundamentals are giving way to uncertainty.
On the supply side, strong prices and recovering, formerly parched US pastureland boosted cattle inventories ahead of expectations –but this market cycle is topping out. Oklahoma State University Livestock Extension economist Derrel Peel states that "Demand, both foreign and domestic, has supported cattle prices even as we have seen increasing supplies of beef and competing meats."
As a result, H1 2019 has seen an extension of 2016 to 2018 market conditions, with live cattle trading mostly trading in the US$1.05/lb to US$1.25/lb range. On one hand, this is nearly 33% lower than the US$1.30/lb to US$1.65/lb range they traded in from 2014 through 2016, which motivated the restocking of US cattle herds from a sixty-year low point.
On the other hand, beef cattle's long, multi-year grow out time means that its supply-side response lags behind these market signals. Consequently, even as prices slowly deflated from their mid-decade record peaks, improving post-2016 pastureland conditions made herd growth peak in early 2016, when both beef cattle (+2.9%) and all cattle (3.1%) by approximately 3% from opening 2015 levels. By the start of 2017 growth momentum shifted to boosting beef cattle (3.5%) numbers on-year, as their profitability now exceeded that of the overall herd (+1.9%).
On one hand, post-2016 30% cattle price deflation means that in both 2018 and 2019, opening beef cattle (+0.9%) and overall cattle numbers (+0.6%) increased far more slowly than in the previous two years. Even so, with cattle numbers at their highest levels since 2007, the rapid post-2015 herd expansion resulted in the fastest beef output growth rate seen in decades.
From 10.817 million tonnes in 2015, beef output will have expanded by an average of 3.6% annually through the end of 2018. At 12.44 million tonnes, 2019's USDA projected beef production is poised to finally break 2002's 12.427 million tonne record –but this may represent the cresting high point of the current cattle market cycle.
The higher output coincided with an economic boom that saw beef consumption grow by over 2.3% annually since 2015, which was its fastest demand growth in decades. Finishing weights also increased as farmers sought to take advantage of high prices. While the rising cattle herd and higher grow out weights boosted beef production faster than consumption, this has not been a problem.
The last decade saw China beef import volumes undergo exponential growth, rising from near zero to overtaking Japan as the world market's largest buyer  --with US beef's share of this new, large market near 0% for most of this time. Since 2015, China's rising beef demand has more than offset slacker Middle Eastern growth and coincided with a resumption of strong import volume growth in mature wealthy Asian markets such as South Korea and Japan, which have a long history of importing US beef.
Hence, unexpectedly strong domestic supply growth dovetailed with foreign demand, such that exports increased faster than the USDA initially forecasted. They rose at an11.7% annual rate from 1.028 million tonnes in 2015 to 1.432 million tonnes in 2018, more than 100,000 tonnes above the USDA's 1.3 million tonne estimate for last year. A perennial net beef exporter in value terms, rapid post-2015 supply growth made America's a net exporter by volume after 2017 and the world market's fourth largest supplier.
But now all of US beef's once rapidly growing supply, demand and trade fundamentals are sharply decelerating. With cattle numbers topping out, beef output growth of 6.4% in 2016 and 3.8% in 2017 fell to 2.6% last year and only 1.5% this year. Similarly, consumption growth of 3.6% in 2016 and 3.2% in 2017 has fallen to slightly over 1% in both 2018 and 2019.
Supply-wise, early 2019's bad weather coincided with deteriorating profitability. The coldest winter in more than a decade was followed by record Springtime flooding through parts of the northern plains (where an increasing proportion of US cattle are raised). That made significant amounts of pastureland unavailable for grazing, making feed costs and profitability move in opposite directions. That, in turn, could impact the herd expansion plans of some cattle ranchers. 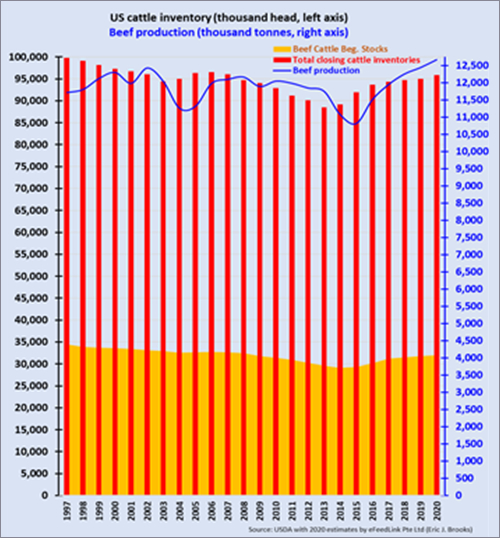