Organisers of VICTAM and GRAPAS International 2019 have announced a successful conclusion for this year's show held at the KoelnMesse exhibition center in Cologne, Germany on June 12-14. 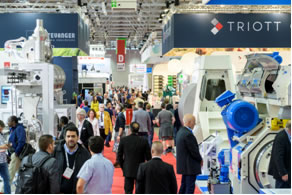 Visitors were pleased at the number of exhibitors and the wide range of products on display, the organisers said. According to them, there were 248 exhibitors and co-exhibitors from 31 countries present at the show. As for visitors, 84.3% of them were key decision-makers in the purchasing process.

Over three days, almost 5,000 visitors from 85 countries came to VICTAM and GRAPAS - the highest number of countries to the show so far. Although the majority of the visitors were from Europe, a growing percentage of the visitors are from other parts of the world (for example, 8 % from Asia, 7% from the Middle East and Africa, 5% from Latin America and 5% from the rest of the world).

VICTAM-GRAPAS organisers also announced the successful conclusion of the inaugural International Feed Technology Conference (IFTC), a cooperation between the University of Wageningen and the Victam Foundation. The conference was fully booked and the 120 delegates from 18 countries listened to presentations delivered by Prof. dr. Jürgen Zentek from the University of Berlin, Dr. Menno Thomas from Zetadec and Dr. Reza Abdollahi from Massey University.

There were also three innovation awards presented at the show, namely, the Animal Feed & Nutrition Award, the Aquafeed Award and the GRAPAS Innovation Award.