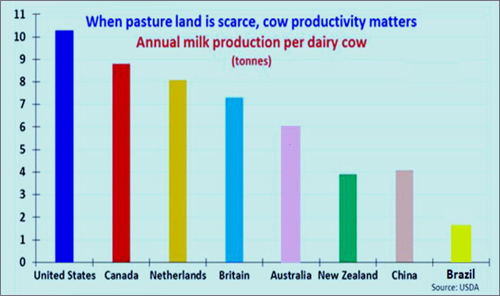 In Oceana, Australia and New Zealand's relatively low output is offset by their relatively tiny populations, making them export-driven, pastureland based world dairy suppliers. Spanning three dozen nations, Europe's vast but stagnant dairy sector is divided up among dozens of nations, with five leading EU producers and three fast-growing Eastern European suppliers dominating output volumes.
Despite collectively supplying the world market more dairy commodities than any other region, Europe remains domestically oriented with under a tenth of output exported. Along with non-EU member Belarus, Netherlands, Germany, France, Italy and Poland dominate European dairy exports.
Compared to Europe or Oceana, Western Hemisphere dairy production is very unipolar and highly concentrated, with regional market barriers and productivity extremes that defy easy generalizations. In some nations, feed-based milk production dominates; others that rely on pastureland, or a combination of the two. Both the world's most advanced dairy technologies and its most primitive ones are found within this region.
A mere four of the Americas' 35 nations are net dairy good exporters but only one has a strong world market presence. The other 30 other western hemisphere nations are either nominally dairy self-sufficient or net importers. The inefficiency, primitive dairy technology and small scale production found in many of these nations drags down overall Western Hemisphere dairy productivity –but two of the region's nations also lead the world in dairy productivity!
Scattered among the 30 other minor dairy producing nations, Argentina, Canada and Brazil have minor world market role. On the other hand, the United States recently overtook Australia to become the world's second largest dairy exporting nation after New Zealand. The United States now leads the world in both dairy cattle productivity and milk processing efficiency –but it hasn't always been this way. 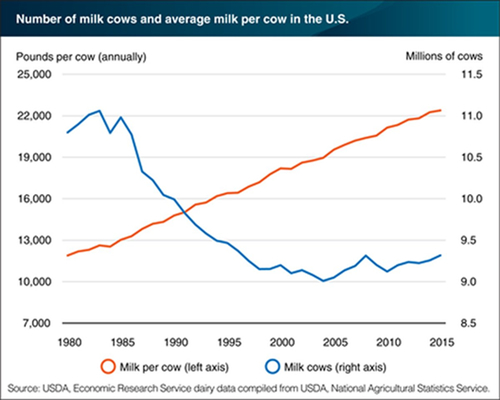 In fact, America is a latecomer to the world dairy market, having only achieved major exporter status after 2000: From 2000 through 2015, the proportion of US dairy output exported jumped from 4% to 18%; thereafter trade wars made this slump back to 15%.
The reasons for America's dairy market ascendancy have to do with both resource abundance, business environment and technology. Unlike the Australian and New Zealand's pasture-based dairy sector, US dairy is a feed-driven, cow productivity dependent business model. As a feed abundant nation, US dairy cattle enjoy feed costs as low as their counterparts in Brazil and Argentina, with significantly lower feed prices than either their Canadian or European competitors.
Leveraging their feed cost advantage to a far greater extent than their Canadian or Latin American competitors, US dairy producers have both invented and implemented productivity-enhancing technology. Innovations ranging from superior dairy cattle genetics to automated farm management and strategic hormone use greatly boosted cattle fluid milk making productivity.
Most importantly, America is not just an exporter of dairy technology to other nations: Unlike Canada or Latin America, the US allowed free market dairy production consolidation to occur. The latter is required in order to make the use of many new dairy farming technologies cost-effective: According to the USDA, average total farm operating costs fall from US$26/cwt for a farm with fewer than 50 dairy cattle to US$16/cwt on farms with more than 1,000 cows.
This scale-driven cost difference drove consolidation, causing the number of US dairy farms to fall from 700,000 in the early 1970s to less than 100,000 today. Over this time period, fluid milk output per farm jumped from 100 tonnes to over 1,600 tonnes.
Consequently, the quantity of milk produced per US cow doubled from approximately 5.4 tonnes in 1980 to approximately 11.0 tonnes today. –With 10.8% fewer cows than it had in 1980, America's 2019 fluid milk production will be 72% higher.
Canada, Brazil and Argentina owe their limited dairy export success to the importation of US dairy cattle genetics, farm management technology and supplements. Even after importing US dairy technology however, America's dairy sector remains more efficient than that of its Western Hemisphere rivals and even European producers.
For example, US dairy cow productivity is almost 20% higher than that of neighboring Canada and at least eight times higher than that of Brazilian cattle. –Simply put, other potentially efficient North and South American dairy producers do not allow market forces to maximize productivity to the same extent the US did.
For example, Canadian dairy herds are nearly 90% as efficient as US cows but their productivity is held back by more than Canada's slightly higher feed costs. This is because in both Canada and Latin America, government regulations and trade barriers protect their dairy sectors from imports while destroying the incentive to fully leverage available dairy farming capital.
Canada's government-run milk marketing boards strictly enforce milk production "quotas" that act as a source of guaranteed income for smaller producers This keeps Canadian milk production remains unconsolidated and productivity too low to compete against larger scale US producers. 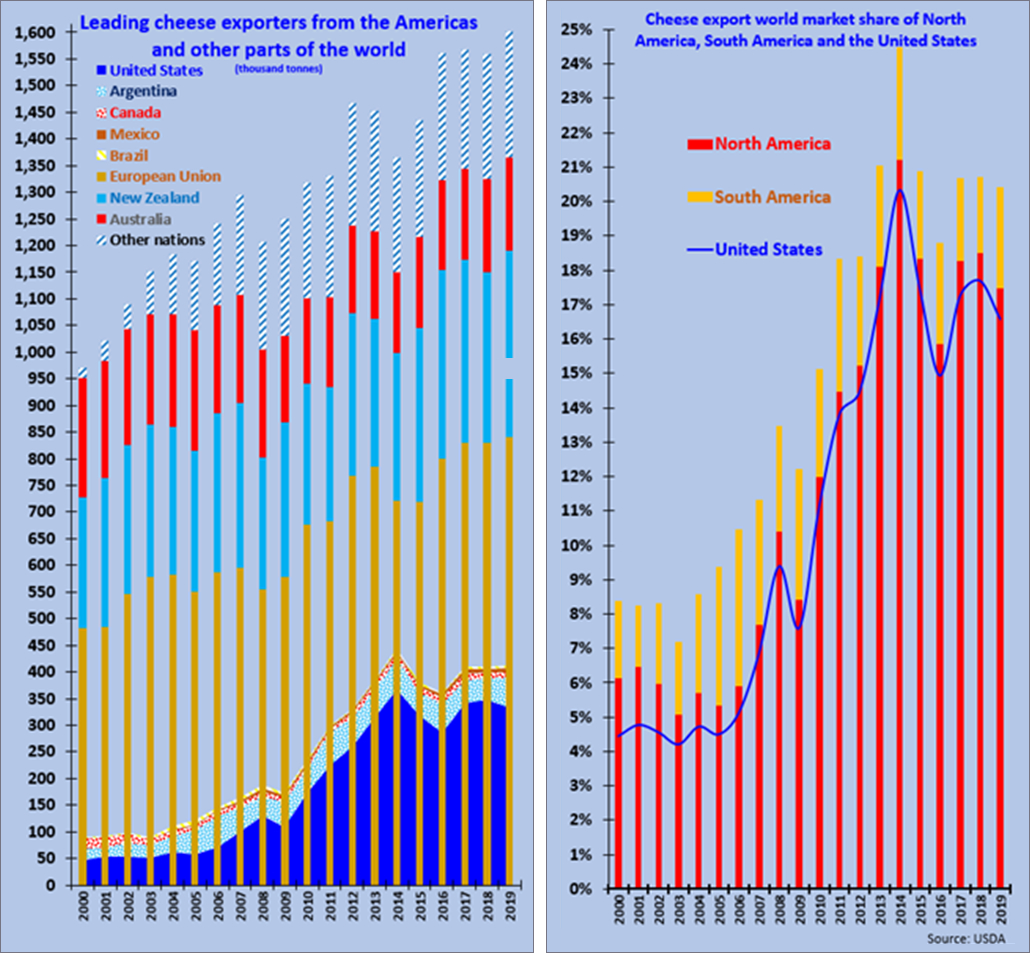 Even under the new USMCA trade agreement that replaces NAFTA, US dairy imports are limited to 3.6% of the Canadian market –with tariffs of 200% to 300% imposed on American dairy goods that exceed their allotted quota.
According to Sylvain Charlebois, a senior fellow at The Atlantic Institute for Market Studies, "For every liter produced, dairy farmers in Canada receive 72% more than the world average. As a result, the average family income for dairy farmers exceeds $160,000." Charlebois adds that "Dairy farmers who received quotas for free when the system was established almost 50 years ago have accumulated assets worth above $5 million." Keeping wealthy inefficient dairy farms in business "equates to almost 1,800 dairy farms we no longer need."
Hence Canada –a nation with low feed costs and the world's second most productive dairy cows after those of the US –would sooner protect wealthy small scale dairy farms than boost productivity high enough to compete with its southern neighbor.
Similar protectionism is the norm in Latin American nations blessed with abundant feed resources and ample pastureland. For example, Brazil's dairy farms operate behind import tariffs of 14.8% on EU milk and 42.8% on EU WMP respectively. Brazilian import tariffs on European cheese make imports up to 200% more expensive than domestically produced cheese.
As is the case in Canada, other policies protect small scale Brazilian dairy farmers and hold back the formation of consolidation-dependent economies of scale. Consequently, Brazil's dairy sector ranges from two cow backyard farms with hand milking of cattle to large-scale state-of-art free-stall and dry lot operations. While Brazil imports US cattle genetics and farming technologies, these policies prevent the formation of scale economies required for full leveraging of available productive dairy capital goods.
This has created a paradoxical situation whereby North America has less than 20% of the Western Hemisphere's dairy cattle herd but accounts for 77% of its milk production, with the US single-handedly supplying 62% of this proportion.  9.4 million US dairy cows will produce over 100.1 million tonnes of milk –nearly four times more than 26.2 million tonnes produced by Brazils 43.1 million head dairy herd.
The productivity gap between US and Canadian dairy farming is actually small compared to the efficiency gap between North America and Brazil –and many Latin American nations have even lower milk making productivity.
Consequently, America on its own defines the Western Hemisphere's contribution to the world dairy market –and until recently, its share of the world market was growing aggressively. Whether it's fatty value-added products or commodity dairy powders, the proportion of US dairy products exported jumped from 4% in 1998 to over 15% last year, generating US$5.6 billion of revenue in 2018.
US fluid milk exports for example, jumped 541% from a mere 17 million tonnes in 2000 to 109 million tonnes this year.
No nation exports a greater volume of cheese than the United States, which recently overtook New Zealand. From 2000 through 2018, collective EU-28 nation cheese exports increased 92% from 420,000 tonnes  to 830,000 tonnes. New Zealand cheese exports rose 30% from 246,000 to 320,000 tonnes while those of Australia declined by 21.5%.
Over these same 18 years, US cheese exports skyrocketed 642%, from 47,000 tonnes to 348,500 tonnes. Hence, the United States accounts for 17.6% of North America's 18.5% share of the 2018 world cheese market with Canada (10,000 tonnes) and Mexico (7,000 tonnes) making marginal contributions. South America's much smaller 2.9% share of world cheese exports was mostly due to Argentina (40,000 tonnes) with tariff protected Brazil supplying a much smaller 4,000 tonnes.
On the other hand, America lags in cheese export revenues, with a 4.6% market share worth US$1.5 billion. Germany (US$4.6 billion, 14.5%), Netherlands (US$4.1 billion, 13%), France (US$3.7 billion, 11.6%), Italy (US$3.3 billion, 10.4%) and Denmark (1.8 billion, 5.6%), all exported smaller quantities of specialized cheeses at significantly higher unit prices. 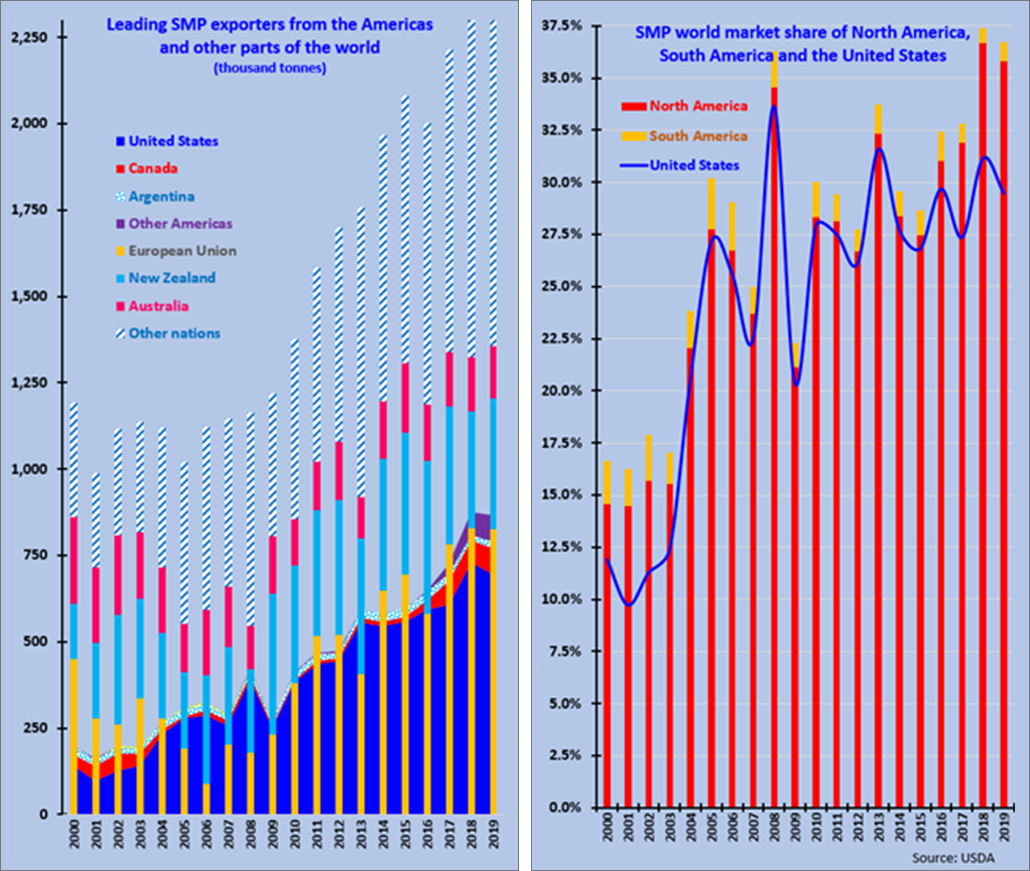 America is even more dominant in SMP exports, where its share has risen from 12% in 2000 to 31% in 2018, overtaking both Australia and New Zealand to become the top supplier nation. Thanks to booming US exports, the Western Hemisphere's share of the world SMP market climbed from 16.7% in 2000 to 37.4% in 2018. Over those years, US SMP exports climbed from 142,000 tonnes to 729,000 tonnes;  more than any other nation and second only to the EU-28's collective 828,000 tonnes.
--Even so, the years since 2015, this US-led dairy success story was interrupted. As the accompanying graphs show, both the US and Western Hemisphere's share of world dairy commodity markets peaked around 2015 and have fallen since. There are two reasons for this.
First, in 2015 Europe abolished Canadian style quotas and allowed EU producers to make as much milk as they wanted. This increased massive EU dairy product surplus just-in-time for Russia to ban their importation. That forced EU producers to diverted surplus dairy goods into Asian markets. Discounted surplus EU cheese, fluid milk and SMP subsequently took market share from US and Australian producers.
Second America's trade wars with China and Mexico resulted in both nations slapping tariffs of up to 25% on US dairy products. This hurt producers badly, as Mexico alone accounted for 20% of the US$5.6 billion of America's 2018 dairy exports. China was the US's second largest dairy export market and its fastest-growing customer. Both nations substituted dairy goods from Australia, New Zealand and Europe in place of import taxed US dairy products.
Hence, right after US producers stopped losing market share to recently de-regulated EU producers, they suddenly faced steep import barriers to their fastest growing export markets.
Going forward, the new USMCA trade agreement and Mexico's subsequent abolition of import tariffs on US dairy products will resume US export growth to the Western Hemisphere's biggest dairy import market. Should America and China finalize a new trade agreement shortly after this article is published, that too would see a resumption of once rapidly growing US cheese and SMP exports to the world's most populated country.
South of the US border, Brazil recently walked away from a planned reduction in dairy import tariffs after politically influential farming lobbyists protested. Its subsidies for small scale dairy farming remain in place.
Argentina's dairy exports recovered after the 2015 election of market-friendly Maurizio Macri. Even so, no one knows if Argentina's dairy-friendly policies and continued recent export growth will continue after its scheduled Q4 election.
Ove the longer-term, the United States alone cannot optimize the Western Hemisphere's role in the world dairy trade: The greatest capacity for export expansion is in feed-rich but productivity-poor South America, not North America.
Should Argentina and Brazil liberalize their dairy farms in the same manner that they did their poultry sectors, the 2020s could see Latin American dairy exports start to compete on both quantity and price against their dominant North American rivals. For now, the Western Hemisphere dairy trade is American dominated, with minor contributions from Canada, Brazil and Argentina.