China fuels rise in US pork exports in Q1

US pork exports in the first quarter rose by 5% to 372,000 tonnes, largely driven by a hefty increase in pork shipments to China, AHDB Pork reported.

Citing figures from the US Department of Commerce, the pork division of the UK Agriculture & Horticulture Development Board said that US exports of fresh and frozen pork to China almost quadrupled compared with the same period in 2015.

The significant increase in exports followed China's relisting of an additional 16 US pork producers at the end of 2015 to participate in the ractopamine-free programme.  These companies, thus, became eligible to export pork to China.

US pork shipments to China are expected to continue to increase during the rest of 2016.

During the first quarter, Mexico remained as the largest importer of US pork, although volumes were down 9% versus the same period last year. The strong dollar might have helped dampen shipment levels, according to AHDB Pork.

It was also noted that domestic production in Mexico was increasing but could not keep pace with rising consumption, so a strong import demand to satisfy this need was still forecast.

While volumes of fresh/frozen pork exports increased during the first quarter, the value of shipments decreased by 8%, compared with 2015.

The average unit price also fell, by 13% year on year to US$2.46/kg due to increased production levels in the US, low global prices and strong dollar.-Rick Alberto 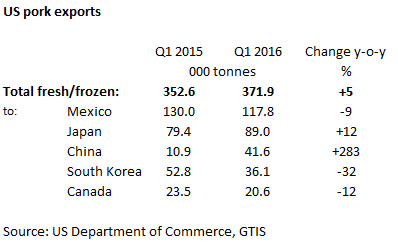