May 7, 2019
Roughly estimating Myanmar's dynamic but murky feed and livestock market
Official statistics are filled with contradictions and exaggerations but this nation's agribusiness sector is growing as quickly as China was in the late 1980s.
By Eric J. Brooks
An eFeedLink Hot Topic

Although Myanmar is one of the most exciting world agribusiness markets, its growth is only matched by the opaqueness of official statistics, which contradict ground level reports. At the same time, Myanmar's skyrocketing meat consumption, income growth and expanding foreign integrator operations make it imperative that we estimate this emerging market's size, scope and metrics.
On one hand, Myanmar's agribusiness boom is very real: While quantitative estimates vary greatly, everyone from the USDA to private analysts concur that since 2010, Myanmar's feed output has expanded by 20% to 35% annually. From a million tonnes or less around 2010, the USDA estimates Myanmar's 2018 feed production at 3.0 million tonnes while Alltech puts it at 3.53 million tonnes. By 2020 feed production should be in the 4.3 to 4.8 million tonne range, some 300% to 400% higher than it was in 2010.
On the other hand, the nation's meat production statistics are best described as implausible: For example, based on "official" statistics, total 2017 meat and aquaculture exceeded 4 million tonnes ---that's over a million tonnes more than the feed output for that year. It implies an impossible feed conversion ratio (FCR) of 1.0 or lower.
At the same time, based on known private investment by multinational, there is an ongoing phenomenal expansion of Myanmar's feed production. Based on established plants and new investments coming on stream this year, Thailand-based CP and Indonesia's based Japfa Comfeed respectively account for at least 500,000 tonnes and 300,000 tonnes of annual Myanmar feed production respectively.
Alongside rival investors including Thailand's Betagro, China's New Hope Group, South Korea's CJ and Netherlands-based De Heus, these foreign multinationals account for 60% of feed production. Large Thai and Indonesian mill owners have established and continue to establish extensive, integrated poultry and swine rearing operations alongside their constantly expanding Myanmar feed milling portfolios.
Given the fact that Myanmar imports almost no meat, a more reasonable estimate of protein production is based on private sector estimates of feed output and per capita meat consumption. For example, a 2015 study by Netherland's based Larive International found that from 2012 through 2015, per capita chicken meat consumption increased 12% annually, from 3.5kg in 2010 to 4.6kg in 2012 to 7.0kg in 2015.
–Based on a 2015 population of 52.4 million people, that implies 2015 chicken meat consumption and production of 375,000 tonnes –far less than the 1.5 million tonnes recorded in "official" government statistics. Extrapolating that per capita consumption slows down to 11% and factoring in nominal population growth, it gives us a respectable 2018 chicken production of slightly over 500,000 tonnes.
Because poultry is the most consolidated livestock line and enjoys the most efficient FCRs, this chicken production estimate is in line with the Alltech Global Feed Survey's 2018 estimate of 2.3 million tonnes of output being accounted for by broilers and layers, with the latter consuming 1.1 million tonnes and producing 580,000 tonnes of eggs last year.
Similarly, based on Alltech's 2018 estimate of 0.8 million tonnes of 2018 swine feed consumption, a swine FCR of 3.5 and an additional portion of inefficient backyard hogs raised on farm scraps, we can estimate 2018's pork production totaled 250,000 tonnes –far less than the official government and UN FAO estimate of approximately a million tonnes of pork production, as the feed required to grow this much pork would probably exceed last year's milling output.
It also means that Myanmar's per capita pork consumption increased from under 1kg in 2000 to 4.7kg in 2018. While pork production is expanding at half the rate of poultry output, swine's relative feed inefficiency means that it will play a large role in driving feed crop demand in years to come.
Collectively, broilers (35%), layers (28%) and swine (22.5%) account for over 85% of Myanmar's feed output. Estimated at 0.5 million tonnes by the USDA and 0.35 million tonnes by Alltech, aquaculture accounts for 10% to 15% of Myanmar feed output. It is both the fastest growing line and the most difficult one to measure.
Whereas official estimates of meat production are exaggerated and mathematically implausible, government estimates of 1.5 million tonnes of seafood production might be close to correct: Myanmar has traditionally had very high seafood consumption, with carp raised on (non-feed) farm scraps accounting for a majority of output.
Aquaculture's immature state means that only several hundred tonnes are raised on commercial, mill-produced aqua feed. Hence, 2019 aqua feed production near 500,000 tonnes and collective aquaculture output of cultivated commercial species such as shrimp, tilapia or feed-raised carp in the 200,000 to 250,000-tonne range appears likely. 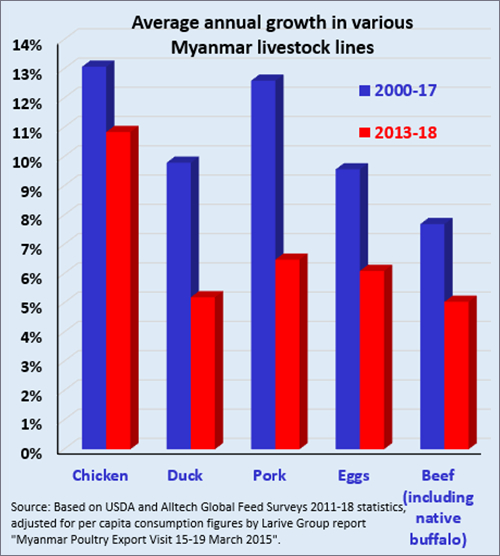 On one hand, we have ignored official government and FAO statistics and estimated the output of major meat lines on independently verified feed output and per capita meat consumption estimates multiplied by Myanmar's population. On the other hand, even in independent private studies, both meat consumption and feed output estimates appear to be growing at rates comparable to those found in official statistics.
On that basis, we can conclude that from 2000 through 2017 included, chicken output rose an average of 13.1% annually and at a more conservative 10.8% rate in the five years since 2013. Pork is the second fastest growing meat line, rising an average of 12.6% in the first seventeen years after 2000 but at a noticeably slower 6.5% in the years since 2013.
Similarly, egg output appears to have decelerated from 9.6% annual growth in the first seventeen years of our century to a slower (but still rapid) 6.1% rate since 2013. With output no more than a tenth of broilers, duck meat has been rising at a 5.2% rate since 2013 but can be expected to decelerate more rapidly, as agribusiness stakeholders focus on raising layers.
Going forward, we can conservatively extrapolate the following: Based on Alltech Global Feed Survey statistics, the years from 2011 through 2018 saw Myanmar's feed output grow 28.6% annually, with a considerable margin for error given the sketchiness of official statistics. A more recent USDA survey estimates current annual feed output growth at a still torrid 14% to 15%.
Even with Myanmar feed output poised to double to 7.5 million tonnes by 2025, this will be a fraction of the 20 million tonnes of feed that was several produced by each of several neighboring nations including Thailand, Indonesia and Philippines in 2018. With ASEAN feed output rising more than 5% annually, Myanmar will have to grow by around 10% annually well into the 2040s before its livestock sector can "catch up" to that of nearby Asian nations with similar sized populations.
Going forward, the substitution of superior feed ingredients in place of farm scraps will partially offset slightly slower (but still rapid) meat demand growth. With pork demand decelerating and amid rapid aquaculture expansion, we can expect aquafeed to overtake swine feed as the second largest feed line after poultry in the 2020s.
With a population approaching 60 million and annual protein demand growth of 5% to 15% (depending on the protein line), the 2020s will see Myanmar become Southeast Asia's "next Vietnam": It will enjoy the same, sustained 10%+ feed and overall agribusiness growth well into the 2030s that Vietnam did from the late 1990s through 2015. Needless to say, the best and most exciting time to enter an emerging nation agribusiness line is precisely at the growth stage Myanmar is now entering.