The pork division of the UK's Agriculture & Horticulture Development Board attributed the increase to a combination of factors including a 3% rise in clean pig slaughterings. "This is in line with expectations, given the slight increase in the breeding herd during 2015 and further productivity gains".

Besides the larger number of clean pigs processed, they were heavier than in March 2015. The average carcase weight of 83.1 kilogramme was over a kilo higher than a year before, although lower than the two previous months. The difficult financial situation of producers also meant that sow slaughterings remained inflated, AHDB observed.

Throughputs during the month totalled 23,400 head, around 10%, or 2,200 head, more than the adjusted figure for March last year. From January to March, around 7,500 more sows were slaughtered than in the first three months of 2015. This might indicate some contraction of the breeding herd is underway, particularly if the increase is sustained, the AHDB Pork said. 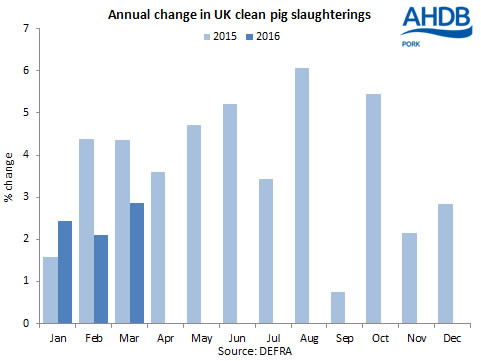