Keynoted by large output increases and down trending prices, the last five years have been good for shrimp buyers but challenging for growers. Even lower prices are ahead but after that, coronavirus probably brought forward the inevitable day when supplies grow tight and the price cycle turns upward.
Defying predictions of a 100,000-tonne output drop for the second year in a row, top producer India boosted 2019 output rise by 7.2%. Speaking at Aqua India 2020, Ravi Kumar Yellanki, president of the Society of Aquaculture Professionals stated that 2019 shrimp production totaled 804,000 tonnes, up from 750,000 tonnes in 2018 and 640,000 tonnes in 2017. For a second consecutive time, pundits predicted Indian shrimp output would level off near 600,000 tonnes, followed by late-year news of the old production record being broken.
This, in turn, allowed Indian shrimp exports to rise 9%, from 630,000 tonnes in 2018 to 686,710 tonnes last year, generating US$4.47 billion in revenue. Indian shrimp exports and output have increased by 97% and 145% respectively since 2014 when our current era of low shrimp prices began.
Flourishing output also keynoted number two exporter Ecuador. Blessed with lower stocking densities, more untapped land for expansion and the recent electrification of existing farms, Ecuadorian shrimp production rose 15.8%, from 2018's 570,000 tonnes to 650,000 tonnes last year.
That allowed exports to increase a whopping 25%, from 507,111 tonnes in 2018 to 633,890 tonnes last year. Ecuador's impressive performance was made possible by China, which increased the volume and value of its Ecuadorian shrimp imports by 252% (to 348,000 tonnes) and 225% (to US$2.08 billion) respectively. It single-handily accounts for 53.4% of the US$3.89 billion in revenue earned by Ecuadorian shrimp exports in 2019.
China also factored into India's export success, though mostly through smuggling: Of the 171,700 tonnes of shrimp India shipped to Vietnam, approximately 144,200 tonnes was subsequently smuggled into China. Vietnam thus accounted for just 4% of Indian shrimp exports while China (unofficially) absorbed 21%. 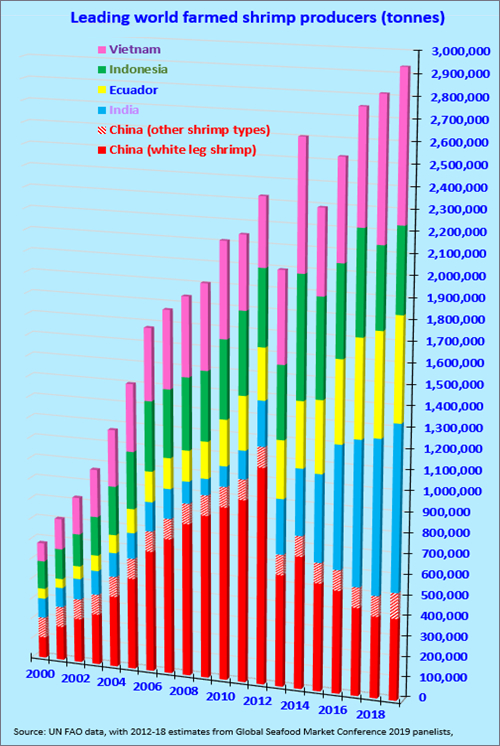 But here, India is caught in a trap: Having fewer untapped ponds than Ecuador, its stocking densities and disease outbreak problems are getting worse. –But the same antibiotics that keep shrimp diseases at bay have stopped India from penetrating European markets and threatens its US export revenues too.
With higher production costs than Ecuador and export prices falling, it is becoming more difficult for Indian shrimp processors to offer farmers high enough prices to boost production further.
Even before coronavirus broke out, America had increased import duties on Indian shrimp from 0.34% in 2018 to 2.34% last year. With the US now undertaking similar restaurant lockdowns, travel restrictions and social distancing measures already implemented in Europe, it is only a matter of time before American shrimp imports are deflated by the same market forces.
In a March 16 interview with India based Economic Times, Anwar Hashim, managing director of Adad Fisheries stated "Most of the seafood-consuming countries in the Mediterranean belt including Italy, Spain, Greece, Portugal, and France are suffering. They have asked us to stop sending shipments till further notice."
Pushkar Mukewar, co-founder and CEO of US-based Drip Capital says, "Quality concerns from buyer markets, particularly in the West, are going to remain a big challenge for Indian farmers who face increasing competition from other markets offering high-quality, value-added products. It will be difficult for Indian farms to fund investments in sustainable, antibiotic-free production at a time when low prices are making profit margins too thin to risk losses from disease outbreaks.
Ecuadorian and Indian producers are thus being confronted with low prices, dwindling profit margins and feel no incentive to boost output at this time. Depending on how long coronavirus restrictions cause recessions and dent seafood demand, this implies falling shrimp production and output through H1 2020 and possibly longer.
When the recovery comes, a sudden, volatile price increase will be needed to jump-start production. At that time Ecuador's lower production costs, lower antibiotic usage, and untapped resources will come into play. Post coronavirus, the 2020s will see Ecuadorian shrimp exports catch up to and overtake those of India.