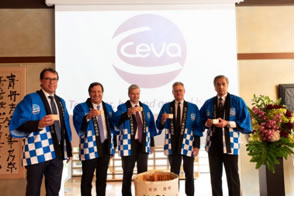 Ceva has a global network of vaccine innovation centers with Ceva Japan being a prime driver behind the company's global scientific achievements. Today, one in four of all broiler chickens produced in the world is vaccinated with one of Ceva's new technology vaccines, many of which originate from the "cutting edge" research conducted in Japan, the company said.

The French Ambassador to Japan hosted the event with over 150 guests, including partner companies that had gathered to celebrate the success of a "remarkably innovative" team.

"I would like to thank all our Japanese team and their leader Yasuda Atsushi, for their commitment, modesty and sense of teamwork," Prikazsky said during his speech at the anniversary ceremony.

"Their integration into Ceva in 2009 was a great opportunity for us. The team has an amazing track record of innovation and I'm very proud of them and what they have achieved."