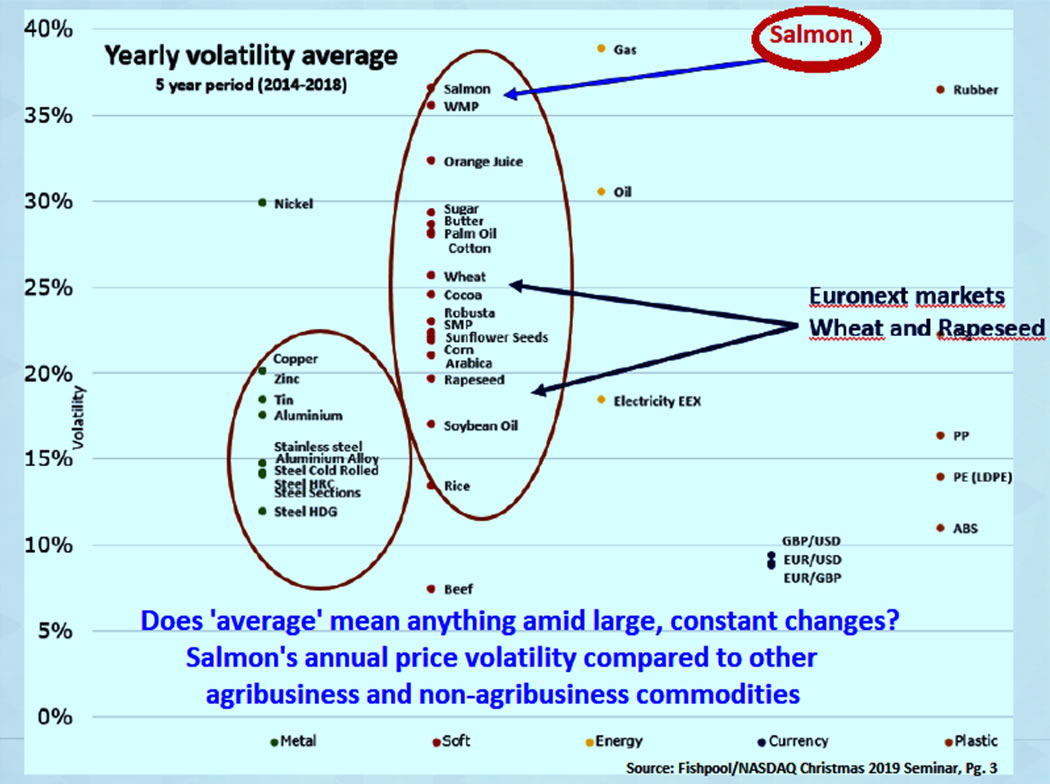 While prices are no longer hyperinflating as before, 2019 was another year of volatile salmon prices. Prices have leveled out at historically levels but salmon remains most volatile of all agribusiness commodities. From 2014 through 2019 inclusive, salmon varied in price by an average of 36% in any given year, compared to 28% for butter and palm oil, 22% for corn, 18% to 20% for copper, zinc and aluminum and 5% for beef. 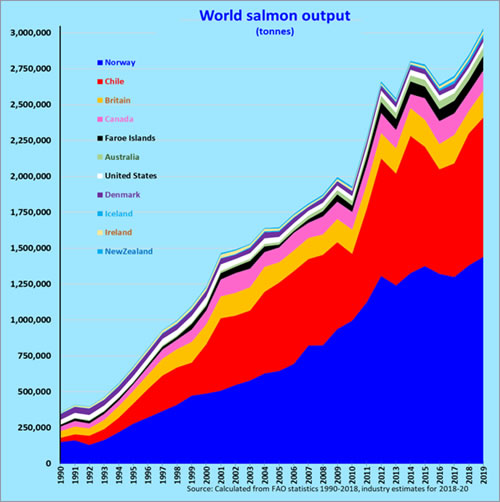 Over these five years, only natural gas (39%) exceeded salmon's average annual price volatility. 2019 was another volatile year, with prices varying by nearly 30% from around their average level near NOK57/kg (US$6.49/kg). What is interesting is that while salmon's average price and trading range have been relatively constant for two years, inter-seasonal variations and news-driven volatility remains at very high levels.
This is because even small supply changes are having a disproportionately large impact on prices. For example, Norway's early 2019 loss of eight million smolts to an algal bloom interrupted their seasonal Q2 to Q3 deflationary trend, causing prices to shoot up 27% in less than 10 days, from NOK55/kg to over NOK70/kg. Fortunately for buyers, the supply-side news was mostly positive –but timing was (and is) everything.
On one hand, salmon's highest 2019 prices were about 5% below the NOK75-80/kg peaks achieved from H1 2016 through H1 2018 inclusive. At NOK40.5/kg, a mid-year "bump" in Norwegian production made its 2019 lows dip more than 10% below market bottoms seen from 2016 through mid-2018.
On the other hand, while the 'average' 2019 price of NOK58/kg was less than 5% below the 2016-18 average, wild quarterly fluctuations of 20% to 50% mean that to maximize profits, buyers and sellers must be exceptionally careful in the timing of their market entry and exit.
Volatility stems from the fact that two years of good supply growth are merely 'catching up' to the production declines and demand growth that preceded them.
After several years of struggling with pathogens such as sea lice, bad weather and high mortality, 2019 saw Norwegian salmon made a healthy, surprisingly strong comeback. Not even the early 2019 loss of millions of smolts to an algal bloom could break production momentum.
At the same time, Norwegian salmon farms appear to have made a trade-off short term deflationary volatility in 2019 for stronger prices this year. That's because after a half-decade of rising fish mortality stagnant output, they were caught off guard by their own success at boosting production levels.
Mortality went down, boosting not just the number of salmon available for grow out but also their finishing weights. As a result, from August 2019 onwards, the volume of Norwegian salmon biomass produced rose approximately 25% to 30% above levels seen in H1 2019.
The number of conventional smolts rose from just under 310 million in 2016, 2017 and 2018 to 325 million this year and estimated for 2020 –but the number of large smolts exceeding 250g in weight skyrocketed far faster; from 5 million in 2016 to around 28 million in 2019 and a projected 40 million in 2020. 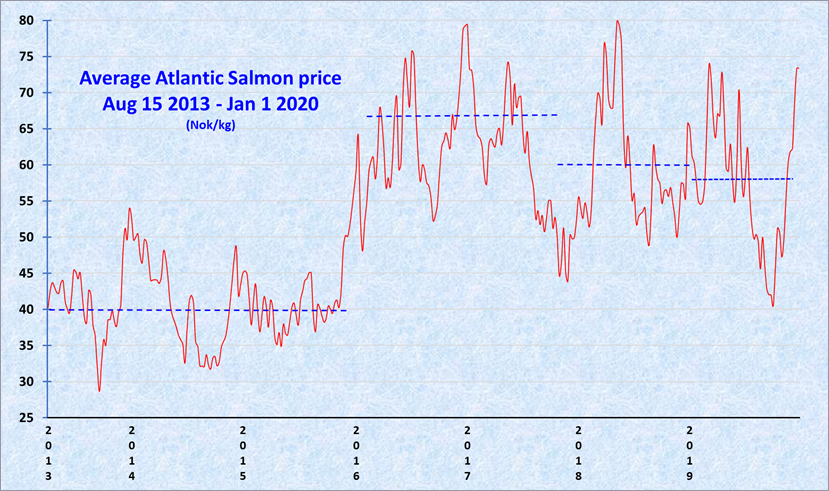 This caused Norwegian farms to exceed their Maximum Allowed Biomass (MAB) limits, which resulted in the forced sale of excess salmon to stay within their allowed range. That caused prices to crash from Q3's NOK62/kg to near NOK41/kg by early October.
On the other hand, because producers sold their excess salmon so quickly, by early December, government statistics reported that total Norwegian biomass was only 0.6% above last year's volume. That coincided with a cyclically strong Q4 export demand, with buyers coming out in greater than expected numbers.
Along with stronger than expected Eastern European demand, late 2019 made it near official that this year's global catch of wild salmon would be approximately 13% below 2018 levels and 4% lower than 2017's catch. Sagging wild salmon catch volumes forced late-year buyers to bid for an additional several hundred thousand tonnes of farmed salmon more than they had expected to buy. Coinciding with the rapid dissipation of Norway's Q3 oversupply, this gave prices an additional upward push.
As a result, from just above NOK40/kg in early October, prices averaged across all salmon sizes jumped by 50%, breaking the NOK60/kg barrier by mid-November. They then increased by 22.5%, entering January 2020 at NOK73.5%.
In all, preliminary industry estimates imply Norway enjoyed 4.5% salmon output expansion, from 2018's 1.38 million tonnes to 1.44 million tonnes, with exports rising a faster 7.3%, from 2018's. 1.170 million tonnes to around 1.26 million tonnes this year.
The dominant salmon producer's slower growth was however, offset by far more rapid production increases elsewhere. H1 2019 Chilean production came in 9% above 2018's levels. Despite mounting sea lice problems in H2 2019, output of all Chilean salmonids is expected to come in around 975,000 tonnes, 6% above 2018's estimated 921,000 tonnes.
While not as popular as Norwegian, European, Australian or New Zealand salmon in leading importing nations or Japan, Chile's new free trade deal with China is making the latter a powerful driver of future export growth. It is also to result in the diversification of Chilean output; as Chinese importers prefer sockeye and other Pacific salmonid species over production-dominant Atlantic salmon.
Smaller producers saw the fastest output growth, with Britain and Faroe Island both increasing their 2018 output 20% on-year, to around 188,000 tonnes and over 100,000 tonnes respectively. Nordic nations, Canada, United States Australia and New Zealand also boosted output by a collective 10.7% and adding another 40,000 tonnes to world production. Collectively, all these tier 2 supplier nations boosted their collective output by 13.7%, adding another 100,000 tonnes to world salmon supplies.
All this added up to a better-than-expected FAO estimated 6.5% rise in world Atlantic salmon output to 2.6 million tonnes, and close to 10% growth in the output of other farmed salmonid species. total world farmed salmon production increased by at least 6.3%, from 2018's 2.85 million tonnes to 3.03 million tonnes in 2019. 6.6% increase in world output of all farmed salmonid lines, from 2.847 million tonnes in 2018 to an estimated 3.167 million tonnes.
Normally such rapid growth would be enough to deflate prices. Unfortunately, with global salmon demand expanding 4% to 5% annually, 2018 and 2019's above-trend growth is merely 'catching' up to the 2012 to 2017 years that saw almost no growth in world output. It is the reason why prices and volatility remain at historically high levels.
Will buyers get relief from high prices or wild market swings in the foreseeable future?
For 2020, the FAO forecasts production to grow by a slower 4.5%±0.5% to approximately 3.166 million tonnes, with much depending on whether Chile can balance additional growth while keeping sea lice outbreaks under control.
--While rapid compared to most protein lines, this pace of expansion in farmed output merely keeps up with salmon demand. It will take several more consecutive years of 6% to 7% annual output growth to tame prices and market volatility to levels once taken for granted.
This means that if all goes well, 2020 could see salmon's average price level fall by up to 5% (to around NOK56/kg); its volatility fall into the 20% to 25%, but the low prices and subdued volatility taken for granted around 2010 will probably not be seen again before the mid-2020s.